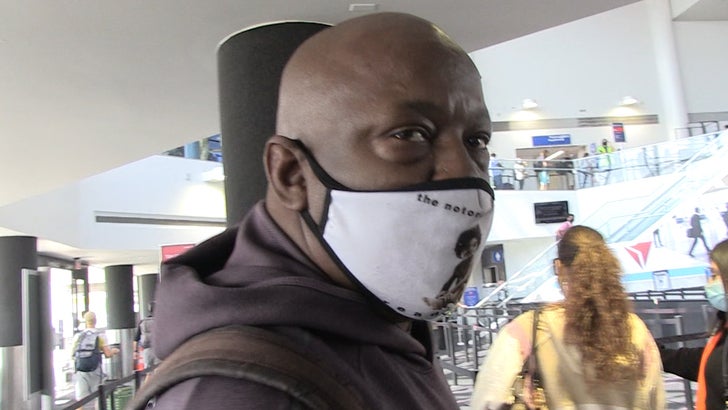 Bobby Brown‘s heard the rumors about the possible remake in the words of Whitney Houston‘s “Bodyguard” … and he’s not feeling it at all.

We got Bobby out Thursday at LAX, and our camera guy asked him point-blank if he thinks remaking such a classic is a bad move, Bobby didn’t hesitate … saying, “Yeah” without a second thought.

Tony-nominated playwright Matthew Lopez has reportedly been tapped to write a reimagining of the iconic 1992 romantic drama starring Whitney and Kevin Costner — and much like Bobby, many fans’ reaction to the news was essentially, “That’s a no for me dawg.”

The film was not only a monumental success at the box office with more than $400 million grossed worldwide … but the soundtrack is the bestselling movie soundtrack of all time, featuring classic Whitney hits like, “I Will Always Love You.”

Now, Bobby had a much better reaction to some other musical news — the fact Rolling Stone named Aretha Franklin‘s “Respect” the No. 1 song of all time. Bobby gives it 👍🏽.

As for that ‘Bodyguard’ remake — no word yet on a possible cast, but that’s just fine with fans who are already destroying the concept.

One fan wrote on Twitter, “This is such a horrible idea. There is no need for a remake of the legendary movie, The Bodyguard. Hollywood refusing to invest in new talent and create new stories is pure laziness at this point.” Someone else wrote, “If it ain’t starring Whitney, I don’t wanna see it! Nope!”

Bobby, brown, of, remake, says, Whi
You may also like: