Brian Austin Green is sticking up for North West.

“Someone just told me that Kim K was given a hard time for posting a pic of a painting North had done. Noah is now working on the same thing in the same art class,” Green wrote in a since-expired Instagram Story photo captured by multiple outlets. He also shared a snap of his son’s scenic art, adding, “It’s unbelievable but true. The kids are painting these and Norths is beautiful.”

In February, Kardashian West posted her 8-year-old daughter’s amazing landscape painting on her Instagram Story. People, however, began questioning North’s skills and if she actually painted it.

“Don’t play with me when it comes to my children,” Kardashian West fiercely defended North, before sharing that her daughter and her best friend, Ryan, have been “taking a serious oil painting class where their talents and creativity are being encouraged and nurtured.”

“North worked incredibly hard on her painting which took several weeks to complete,” she continued, adding that as a “proud mom” she wanted to share her work with everyone. “I’m seeing op-ed pieces in the media and social media from the grown adults breaking down whether or not my child actually painted this! How dare you see children doing awesome things and then try to accuse them on NOT being awesome?!”

She also shared Ryan’s similar painting from their class together. 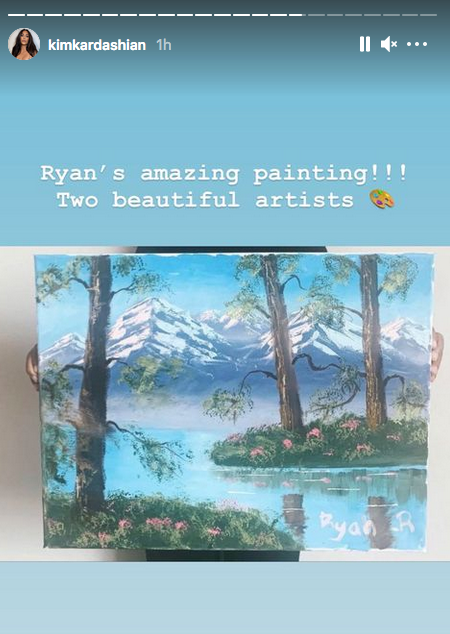 The actor is also father to 19-year-old son Kassius, from his previous relationship with actress Vanessa Marcil.

ET recently spoke with Green and his new girlfriend, Dancing With the Stars pro Sharna Burgess, about their relationship and hopes of expanding their family.

“I’m excited for this time in life … and I’m excited that she’s in my life. I think she’s amazing. My kids love her. It’s a win-win right now,” Green gushed to ET. “I totally love her. That’s without any question at all.”

See more in the video below.

Brian Austin Green, Kim, News
You may also like: