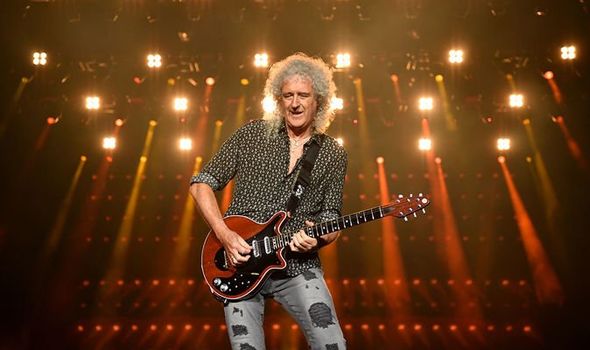 He wrote on Instagram: “The whole bottom floor had been inundated with a sewage overflow – which has covered our carpets, rugs and all kinds of precious things in a stinking sludge. It’s disgusting, and actually quite heartbreaking. It feels like we have been invaded, desecrated.”

Mr May said his former EastEnders actress wife Anita Dobson, 72, had stored “a lifetime of memorabilia” in their basement – “most of it is sodden and ruined”. He claimed “selfish” west London residents were excavating large underground extensions which were disrupting drainage systems.

But Kensington and Chelsea council said that the freak flooding was “not linked to basement building”.

The musician added online: “I had rescued all my most treasured childhood photo albums and scrapbooks from my studio house because it was threatened with a forest fire some months ago.

“Where did I put it all for safety? In the basement here in Kensington. Today it turned into a sodden mess.

“I’m devastated. This stuff is only ‘things’ but it feels like Back To The Future when the photograph fades – feels like a lot of my past has been wiped out.

“Historically, for 150 years, Kensington has never flooded due to rainwater. Why did this happen? It’s almost certainly the result of all the basement building that has been plaguing this area.

“Kensington and Chelsea council was warned years ago that sinking so many deep basement extensions would obstruct the aquifers underneath our living space and render the drainage system ineffective.”

A council spokesman said: “Our priority is to make sure residents who have been affected by flooding have the help they need.

“We have placed 120 residents in emergency hotel accommodation and are making emergency repairs.”

The flash floods affected several London boroughs after the torrential downpour, causing damage and disruption. Parts of the capital were inundated by a whole month’s usual rainfall in just one day.

Around 1.9in of rain fell in 24 hours in Kew, south-west London – most of it in just one hour. The average monthly total for July is 1.75in.

Residents were moved out of their homes, while some train and Tube services were cancelled.

Many motorists were taken by surprise as drains failed to cope with the deluge, leaving vehicles submerged.

London Fire Brigade said it took more than 1,000 phone calls related to flooding. A spokesman said: “We’re asking people not to walk through or drive through the floodwater. Floodwater can be contaminated and vehicles can become unstable.”

A spokesman added: “While our pipes are designed to cope with most storms, Monday’s rainfall was so severe the system filled up very quickly.”
Source: Read Full Article