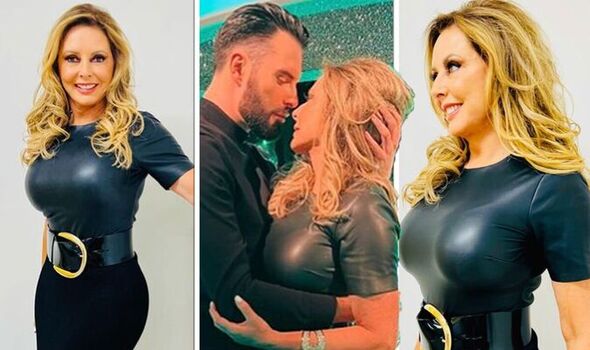 Taking to her Instagram, the Countdown legend shared an array of pictures as the pair caused a stir after they sweetly embraced.

The age-defying beauty sported a skintight leather top that hugged her taut waist and accentuated her jaw-dropping curves. The on-screen star teamed her attire with floor length skirt and elongated her legs with a pair of striking red heels.

In one photo, Rylan and Carol stared into each other’s eyes as the Strictly host placed his hands in her curly blonde locks.

The mum-of-two has since addressed the candid pictures and revealed she jokingly tried to kiss her co-star.

Speaking on BBC Radio Wales, Carol told listeners: “I was on It Takes Two with the lovely Rylan. So, we had a snog before we left… not really.

“But he clutched me tight like we were in an Argentine Tango. Then I stuck my tongue out.

“He went, ‘urghhhhhhhh.’ That was funny.”

The pair shared a sweet embrace after they wrapped up Strictly: It Takes Two.

Speaking on BBC Radio Wales today, Carol said she “stuck her tongue out” but Rylan was having none of it as he cheekily pulled away.

The age-defying beauty looked the epitome of chic in an all black attire which she teamed with towering heels.

Carol Vorderman looked flawless as she posed for pictures

Carol accentuated her stunning looks with a light pink blush and a bright red lip with a smokey eye.