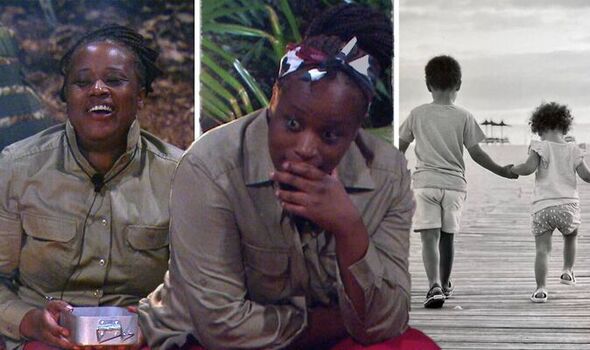 The rare image of Charlene’s two children, Alfie and Florence, was posted to her social media page after the star admitted in the Bush telegraph that she “couldn’t stop crying” during her first night in the jungle. The caption read: “So who saw Charlene crying last night? We just wanted to jump through the tv and hug her. Before she left she made this countdown calendar for Alfie and Florence so they can mark off each day until Char comes home.Keep going Char, we are so proud of you!”

Charlene White, 42, who is best known for appearing on Loose Women and ITV News, admitted in an early episode of the series that she got “over-emotional” and “couldn’t stop crying” on her first night in the jungle.

The presenter and mother to two young children, Florence and Alfie, despaired at how much she missed her family, which prompted her sister, who is managing her social media channels, to post a rare image of the adorable pair.

Shared with Charlene’s 81,200 Instagram followers, Charlene’s sister posted a sweet “countdown calendar” that the star made for her two children before she went away.

The homemade calendar showed that Charlene had to leave the family home and head to Australia on October 27, and is set to return on November 30 when the series ends.

Along with the arts and crafts project was a black and white image of Alfie and Florence, who were holding hands while walking on a beach. The snap of the adorable two, whose faces are never shown on social media, revealed just how young the pair are.

Talking to the Bush telegraph after struggling to sleep on her first night in the jungle, Charlene said: “I’m not used to sleeping outdoors, it’s a new environment [and] I think I was over emotional – I was missing the kids.” After seeing the emotional scenes, Charlene’s family urged her to keep going, adding: “We are so proud of you!”

In order to help stop her two children missing her too much, Charlene created a “countdown calendar” which ends on November 30, the day she returns home. The hand-drawn calendar, which was done on bright orange paper, allows both Alfie and Florence to “mark off each day until Char comes home”.

Having left for Australia back on October 27, Charlene was determined to spend as much time with her children as possible. One activity they did together was choosing pumpkins and carving them for Halloween. A video of their family day out was posted to Charlene’s Instagram, part of the caption read: “As you can see they really got stuck in and enjoyed!”

Like many celebrities who have young children, Charlene is always careful not to show their faces on social media. This leads to very rare pictures of the youngsters being shared. In one post from July 2022, Charlene shared images of her two children having fun in Devon on a mini-break. The adorable kids were seen playing in the sea, enjoying time with donkeys and experiencing camping.

During the first episode of the series, Charlene, comedian Babatunde Aleshe and football legend Jill Scott were thrown in the deep end with the Walk The Plank challenge. The task involved walking on a beam at the top of a tall building to the end of the platform. After going first, Charlene was kept at the end of the platform for a whopping 45 minutes before Babatunde said the fateful words I’m A Celebrity… Get Me Out of Here! and didn’t complete the task.

In the first few episodes of I’m A Celebrity, viewers saw Charlene take charge of cooking, which didn’t go down well with some of her fellow campmates. Both singer Boy George and presenter Scarlette Douglas both seemed to get slightly frustrated with “Charlene’s kitchen” with Boy George saying: “Charlene she just issues orders. For me as an observer of my own feelings, it’s mind blowing.”

Kanye Storms Off Podcast After Facing Pushback On Antisemitic Claims