CHRISTOPHER STEVENS: You've only gone and annoyed the Queen Mum

How The BBC Began

Antiques Roadshow: 100 Years Of The BBC

Talk about history on the hoof. Strictly Come Dancing celebrated the Beeb’s centenary with a succession of dances to favourite TV theme tunes — a paso doble to The Apprentice, a tango to Casualty.

However quirky they looked, the routines reflected the reality of the BBC’s first decades . . . done entirely on the hoof, aired live and apparently made up as they went along.

How The BBC Began (BBC2) painted an entertainingly frank portrait of an institution that didn’t have a clue what it was doing, half the time.

Last month, David Dimbleby’s pompous series, Days That Shook The BBC, implied that wise heads making weighty decisions ruled the Corporation with impeccable moral judgment. Opening with a series of confessional anecdotes, this two-part history exposed that as fiction. Our wayward Auntie is fuelled by a mixture of gambling, guesswork and incompetence. 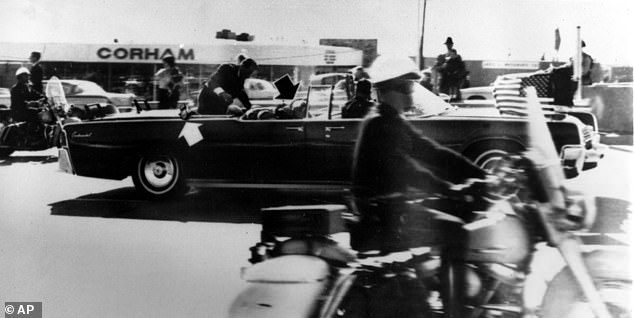 Veteran science presenter James Burke, now 85, recalled how his live programme tracking the Apollo 8 moonshot in 1968 was taken off air before tea, because it was time for Jackanory.

Minutes later, he and Patrick Moore were back on screen. The Queen Mother, watching the spaceship agog, sent a terse message from the palace to the BBC switchboard, demanding to know the fate of the astronauts.

More chaotic than that was the TV newsroom’s reaction to the assassination of President Kennedy in 1963. Unsure of the real story in Dallas, producers opted to suspend broadcasts. The spinning globe logo played for 19 minutes, interrupted by occasional newsflashes. Then, to fill time, Harry Worth comedy sketches were shown.

Winter hols of the weekend:

‘Why isn’t there a Love Island for us over-70s?’ demanded Tony Blackburn, 79, on Michael McIntyre’s The Wheel (BBC1). ‘We could call it Wrinkly Island.’ Take plenty of factor 50, old boy — you don’t want to be Tony Sunburn.

In fairness to the BBC, live pictures from the States were not available. Sending two minutes of footage via the transatlantic cable, frame by frame, took an hour.

If that doesn’t prove how much the world has changed since the BBC’s inception, a snatch of commentary from the 1928 FA Cup Final will do the trick. As Blackburn Rovers scored in the first minute, the sports reporter murmured, ‘Jove, what a sensational start.’

Women were mostly confined to administrative jobs, though they had their revenge. One secretary recalled the scarred face of her boss, Lord Reith, injured by a WWI sniper’s bullet: ‘If you saw him on a dark night,’ she said, ‘you’d be rather frightened.’ Another secretary had to keep all his press cuttings. ‘Reith,’ she chuckled, ‘was extremely vain. Bless him!’

The documentary ended with Huw Wheldon’s reminiscences of filming Winston Churchill’s only live television broadcast, on his 80th birthday in 1954. His speech, made without rehearsal or notes, was a masterpiece of sincerity and emotion. Tears rolled down the old man’s cheeks — probably invisible to viewers on primitive black-and-white sets, but quite clear today. After the cameras stopped rolling, Churchill seemed to deflate. ‘He shuffled off like an old tortoise,’ Wheldon said. The Beeb’s storerooms have also been raided for the centenary, with many props ending up on Antiques Roadshow: 100 Years Of The BBC (BBC1).

Kate Adie produced the ‘dog tags’ she wore during the first Gulf War, to identify her body in the event she was killed. She also has the bullet that ricocheted to strike her leg in Beirut: ‘It tells you that you’ve got to be careful.’

‘Ere, Rodders — you don’t suppose she’s flogging all that gear round the back of New Broadcasting House later . . .