‘We have survived but it was a bit scary’: Duncan Bannatyne reveals he and his wife were forced to flee their Portuguese mansion after a wildfire spread through the Algarve

Duncan Bannatyne has revealed he and his wife had to flee from his Portuguese mansion after a wildfire ravaged through the Algarve amid a surge in temperatures.

The former Dragons Den star, 73, now lives full time with wife Nigora, 42, in Vale do Lobo – where a fire broke out as it spread from the north to the south of Portugal on Wednesday.

Duncan took to Twitter to tell his followers that he and his family were forced to leave their home after flames spread through the resort where he lives amid a heatwave. 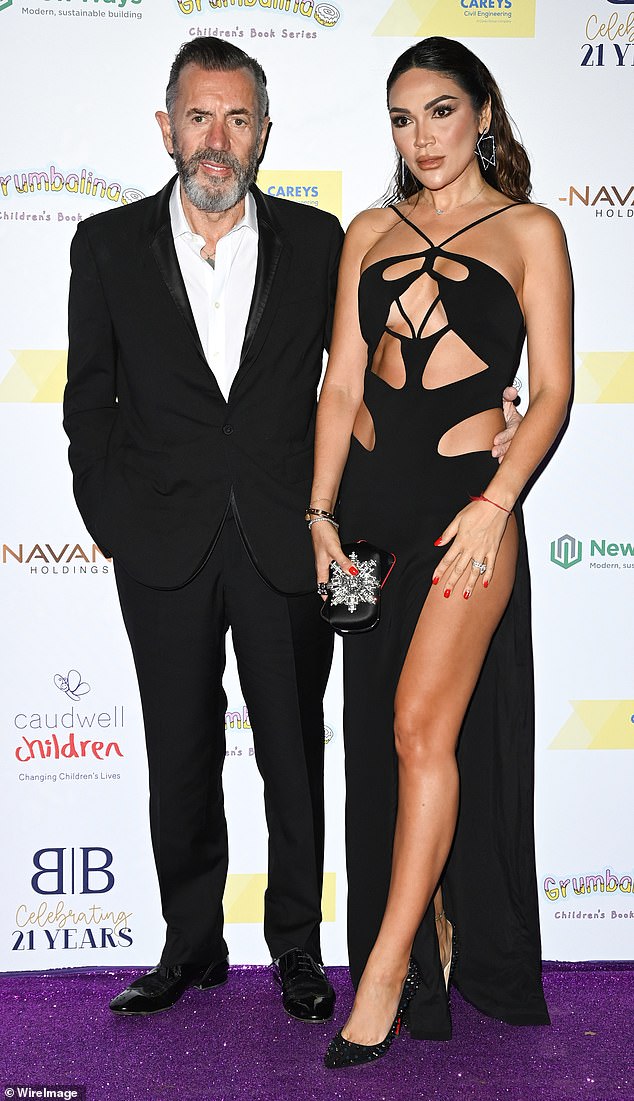 Shock: Duncan Bannatyne has revealed he and his wife Nigora (pictured in November) had to flee from his Portuguese mansion after fire ravaged through the Algarve

He wrote: ‘Terrible day in the Algarve today. We have survived but it was a bit scary. Yes. We had to leave our homes today but luckily very few properties were damaged.’

The entrepreneur also shared footage of a helicopter which scooped up water from the sea, saying: ‘They are doing a fantastic job.’

He also posted a video of the emergency services and fire brigade arriving near his home, admitting he couldn’t go back until the paths had been cleared.

He was heard telling Nigora in the clip: ‘So we can’t go home because they are blocking the road down to our house. 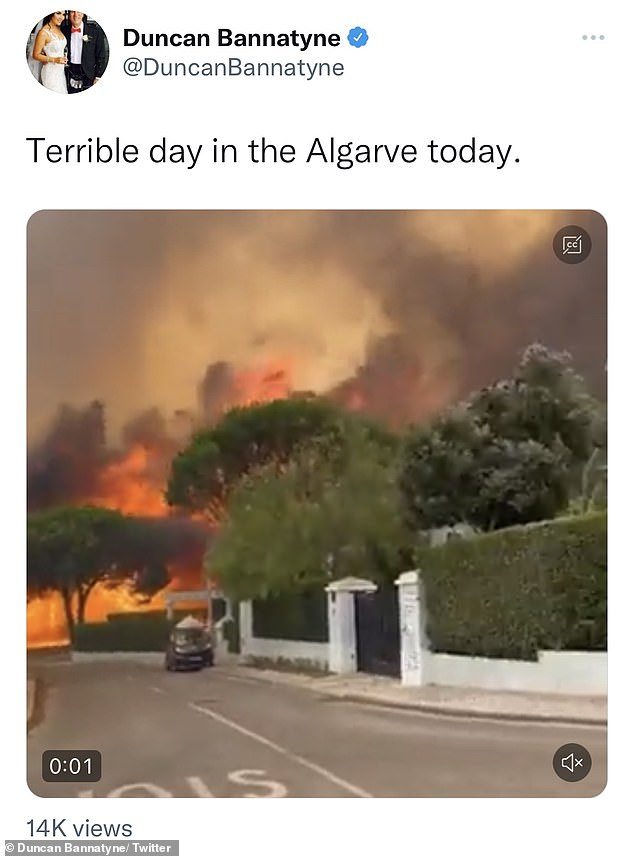 Wildfires: The former Dragons Den star, 73, took to Twitter to tell his followers that he and his family were forced to leave their home after flames spread through the resort where he lives

‘Maybe the fire has started again. As Nigora can be heard saying: “S**t what do we do next?” Duncan replies: “Nothing we do except stay here for the moment”.’

He then added: ‘Was a hell of a day in the Algarve today.’

Duncan also took to Twitter to share more videos as the fire spread through the resort saying: ‘Vale Do Lobo entrance earlier today.’

Sharing an update on the fire, he added: ‘We were evicted from our homes here today but luckily most fires were contained by early evening.’

‘We had to leave our homes’: Duncan took to Twitter to share regular updates with his 710,000 followers after he and his wife Nigora were forced to leave their home amid the wildfires

The businessman also praised the emergency services for doing a ‘fantastic’ job as firefighters continued to tackle the wildfires as temperatures soared this week.

Duncan lives in Portugal’s premium Golden Triangle area, where the spas of Vale do Lobo, Quinta do Lago, Vilamoura and Pine Cliffs are located.

He bought a luxury five-bedroom villa in a prime spot in Vale do Lobo, paying around £2.5million (€3million) for it in 2014.

It is now said to be worth around £5million (€5.9million) but Duncan recently bought another property in the ware which overlooks the sea. 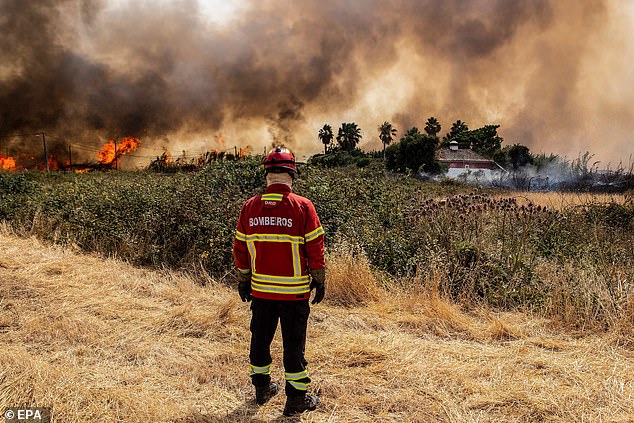 Heatwave: A firefighter watches the flames near a house threatened by a fire in the Ludo area of Faro in the Algarve on Wednesday

Amid a blistering heatwave, fires have devastated parts of Portugal, where temperatures are tipped to reach 45C (113F) this week, including a luxury resort home to the rich and famous.

Around 70 people were asked to leave their upmarket homes in the exclusive Pinheiros Altos where Steven Gerrard and John Terry own properties, with the flames reaching just 550 yards from Roman Abramovich’s £8.5million Algarve mansion.

Elsewhere, a fire threatening Quinta do Lago started late on Tuesday night near Algarve University and in an area where a four-day international motorbike festival is due to start on Thursday. 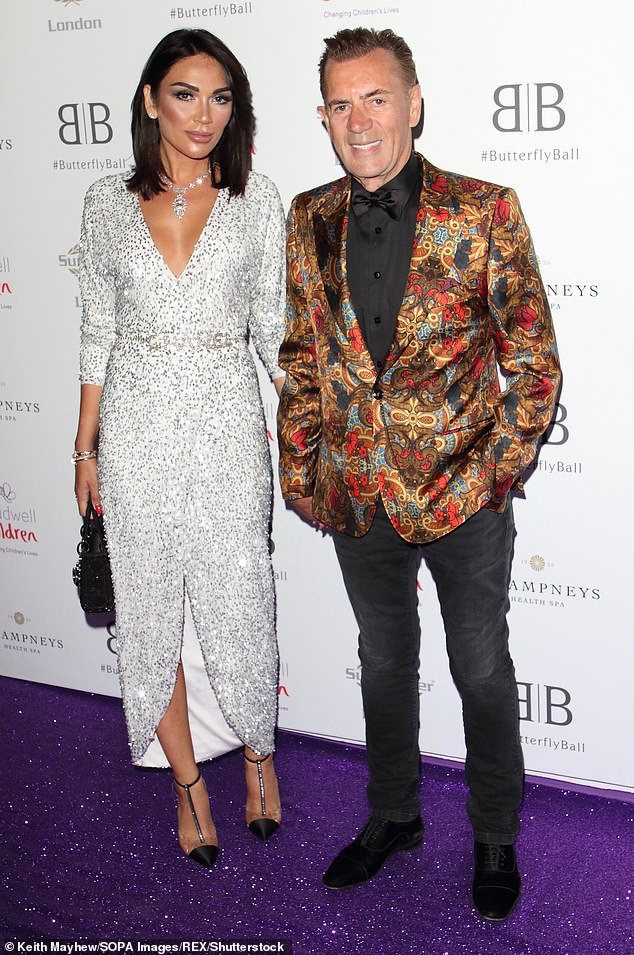 Home: Duncan (pictured with his wife Nigora in June 2019) bought a luxury five-bedroom villa in the premium Golden Triangle area in Vale do Lobo, paying around £2.5million for it in 2014