Here’s a royal portrait with a difference. Prince Albert of Monaco poses for a photo with his two children by former lovers for the first time.

Wearing an open-necked shirt, the Prince, 64, has his arm round American actress Jazmin Grimaldi, 30, his daughter with American waitress Tamara Rotolo, 61.

Jazmin met him for the first time when she was 11 after a DNA test confirmed Albert was her father.

‘It’s wonderful that it happened when it did, and we’ve been enjoying a great relationship ever since,’ she said.

Jazmin has her arm round Alexandre Grimaldi-Coste, 19, Nicole’s son. Albert confirmed he was Alexandre’s father just before he was enthroned as ruler of the principality in 2005. ‘Paternally king,’ Nicole remarks.

Albert also has seven-year-old twins with his wife, the former Olympic swimmer Princess Charlene, 44, whom he married in 2011. 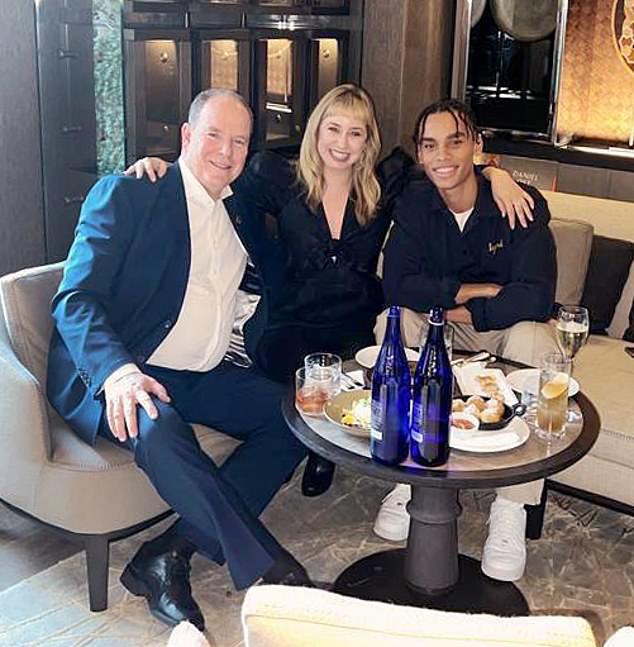 Prince Albert is pictured in Monaco, posing for a photo with two children by his former lovers. The extraordinary picture, taken in New York, was shared online by his ex, Nicole Coste, 50, a Togolese former Air France hostess 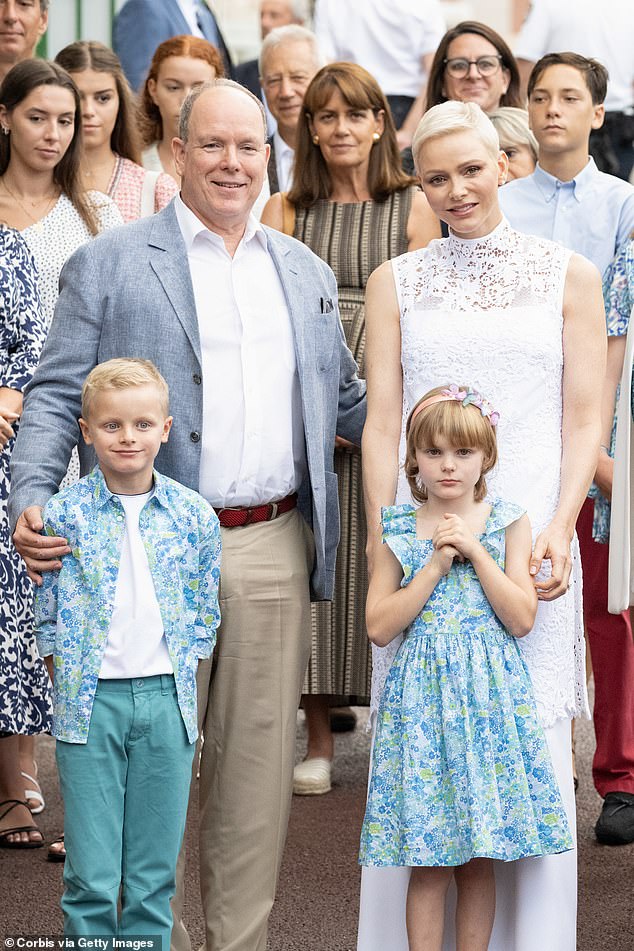 Albert also has seven-year-old twins with his wife, the former Olympic swimmer Princess Charlene, 44, whom he married in 2011

The Duchess of Sussex has said that she’s happy to be back in her native California, but Prince Harry would rather have moved to a different continent.

His friend, the celebrated primatologist Dame Jane Goodall, has revealed he wanted the couple to live in Africa, where he has spent some of his happiest times.

‘He wanted to bring Archie up in Africa, running barefoot with African children,’ she says of their three-year-old son. He and Meghan also have a daughter, Lilibet, aged 17 months.

It wasn’t just an idle hope. In 2019, it was disclosed that courtiers had drawn up plans to hand the Duke and Duchess of Sussex a major international job that could have seen them moving abroad after the birth of their first child, probably to Africa.

Of course, the plans were never put into action and the couple moved to the U.S. before quitting royal duties. It could have made it more difficult for the Sussexes to sign lucrative deals with American companies had they moved to Africa. Meghan told Nigerian-American comedian Ziwe Fumudoh on her Archetypes podcast last month that genealogy tests had found her ancestry was 43 per cent Nigerian.

Dame Jane was previously interviewed by Harry for the edition of British Vogue edited by his wife in 2019. In it, she spoke warmly of meeting and cuddling Archie.

In her latest comments, she says of the couple: ‘I don’t talk about them now. Of course, I have my views, and I think Harry cares, I really think he does.’ Speaking to The Times, she adds: ‘My times that I talked with him I just felt that he was a really nice, good person.’

The naturalist may be reluctant to say more after the furore over the Vogue chat. In it, Harry spoke about the number of children he wanted, ‘two, maximum’ — interpreted as a dig at Prince William and Catherine, who have three.

Why Oti’s a cheap(er) date

She shimmied to victory lifting the glitterball trophy twice on Strictly Come Dancing during her seven-year stint on the show, but Oti Mabuse seems to be struggling to bring the sparkle to her latest venture.

I hear that ticket prices to her London Dance Nights have been slashed by half.

Organisers of the event this weekend at the Novotel in Hammersmith, West London, promise it will be a ‘night like no other’.

Tickets have now been reduced to £89. 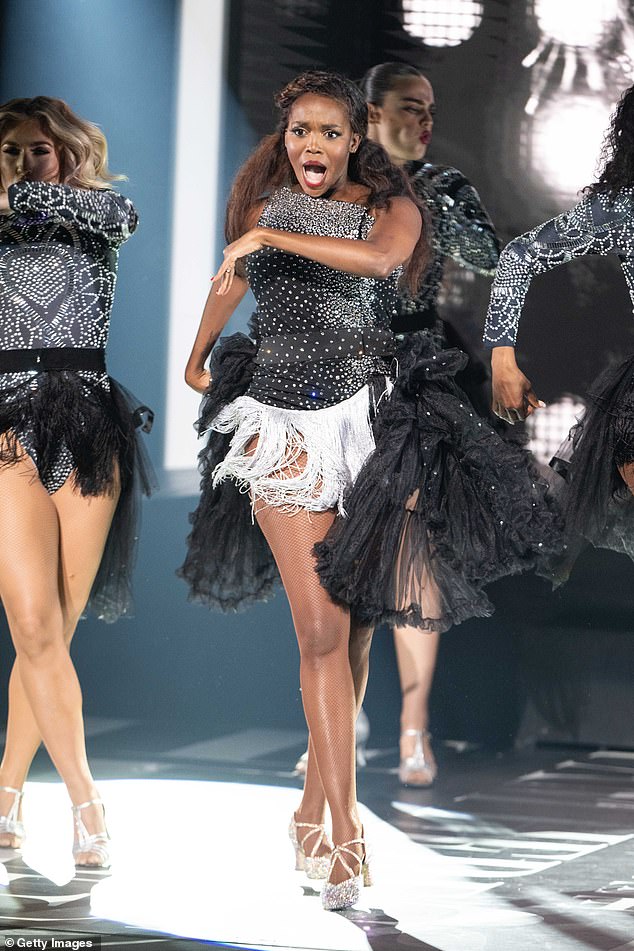 Organisers of Strictly Come Dancing this weekend, featuring Oti Mabuse at the Novotel in Hammersmith, promise it will be a ‘night like no other’. But ticket prices have been slashed

Marks & Spencer heiress Rebecca Sieff fell in love with Castle Howard when she was 14 years old and watched Brideshead Revisited, the ITV epic drama filmed at the Yorkshire stately home. She went on to marry its owner, the late Simon Howard.

Karen Spencer, who is now chatelaine of Althorp, insists she had no such aspirations for the Northamptonshire pile where Princess Diana grew up.

‘If I am honest, initially I rejected the full-time nature of this role,’ says the Canadian, 50, who became Earl Spencer’s third wife in 2011. ‘I thought the house was lovely, but it’s not going to take up too much of my time. But I will confess that it has sucked me in.’

Fergie takes her pooch for a pedal

Prince Andrew was said in The Mail On Sunday to be ‘completely depressed and lost’ after his hopes of returning to public life were dashed by King Charles. His ex-wife Sarah, Duchess of York is, by contrast, full of good cheer.

Yesterday, she shared this jolly photograph with her followers online, commenting, ‘Keeping joyful this autumn.’ In her basket is one of their Norfolk terriers.

Fergie, 63, added: ‘Autumn is a perfect time to start anew… and get a little cheeky.’ The picture is thought to have been taken at Windsor, where she still lives at Royal Lodge in a separate wing from Andrew, whom she divorced in 1996. 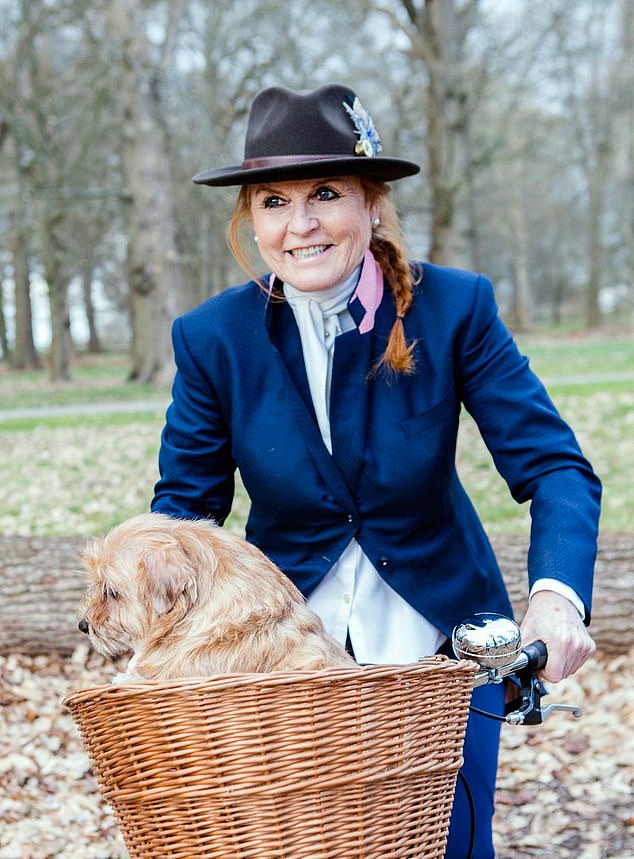 Duchess of York is full of good cheer. Yesterday, she rode around with a Yorkshire terrier in her basket and shared the jolly photograph with her followers online, commenting: ‘Keeping joyful this autumn’

Baroness Shackleton of Belgravia, nicknamed ‘the Steel Magnolia’ because of her reputation as one of the country’s most formidable divorce lawyers, insists her nose has not been put out of joint by the arrival of a new peer in her swanky area of London.

Historian Andrew Roberts has chosen the title Baron Roberts of Belgravia after being handed a seat in the House of Lords by his old friend Boris Johnson.

Fiona Shackleton tells me: ‘You can have any amount of peers of the same place. [Late advertising grandee] Tim Bell also was “of Belgravia”. There may be others.’