Follow
Home » Celebrities » Ellen Pompeo and Her Husband, Chris Ivery, Have Been Together for More Than 15 Years

Ellen Pompeo and Her Husband, Chris Ivery, Have Been Together for More Than 15 Years

Ellen Pompeo’s character Meredith on Grey’s Anatomy may have a wild love life featuring plotlines that have spanned seasons, but the actor herself has remained relatively hush-hush about her own IRL relationship. After meeting her now-husband, Chris Ivery, in 2003 and getting married in 2007, Ellen welcomed three children with the record producer. They’re an adorable family! I mean, just take a look at this sweet IG tribute:

So who exactly is Ellen’s “rock” and “soulmate” of 15+ years? We did all the deep-diving so you don’t have to. Here’s everything to know about Ellen Pompeo’s husband Chris Ivery, from his impressive career to his awk feelings about some of her steamier Grey’s scenes.

Chris Ivery is a record producer

Ellen’s hubs is primarily known for spending many years working as a record producer, and you may or may not be familiar with some of the tracks he’s worked on. Ahem, does “Cheers (Drink to That)” by Rihanna ring a bell? (If you’re thinking I’m just trying to come up with an excuse for us to watch the music vid, you’d be correct:)

In addition to his work in the music industry, Chris more recently became an executive for heritage athletics brand Sergio Tacchini—a feat Ellen is super proud of. “He’s been in the music business for 25 years and he changed careers at 50. And he killed it. I mean, knocked it out of the park. It’s amazing! So for anybody who feels they’re stuck, you can change your career at any age,” she dished to Us Weekly in 2019 when speaking of her husband’s pivot to fashion at the age of 50. Pic of one v recognizable fan of the brand, incoming 👀:

Ellen and Chris were friends first before kindling their ~romance~

As it turns out, the couple actually had a sweet meet-cute, aka they first locked eyes at a Los Angeles grocery store in 2003. For the next six months, the two remained friends until “one night she just looked different to me,” Chris recalled to People.

The more Ellen and Chris got to know each other, the more they felt like their ‘ship was destined. “We were six degrees our whole lives, so I feel like we were sort of meant to be,” Ellen confessed when recounting the moment they discovered that they’d grown up only a few minutes apart in Boston.

They got married in New York City

In 2006, three years after meeting, Chris proposed to Ellen after a breakfast on her 37th birthday. “She was surprised and thrilled,” her rep dished to People at the time. And honestly? I would be too if I got proposed to on my birthday…aaaaaand with a 3.5-carat, emerald-cut diamond in a platinum setting, no less ¯\_(ツ)_/¯. 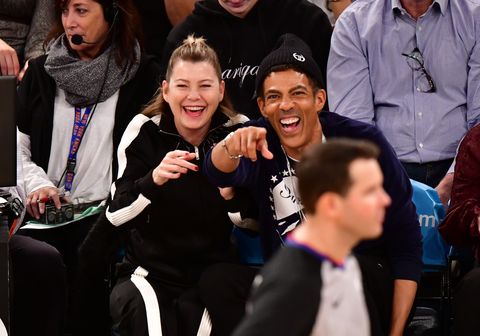 ^ My future ring budget laughing at me lol.

The pair wound up tying the knot a year later in an intimate ceremony at City Hall in Lower Manhattan and even had former New York City Mayor Michael Bloomberg serve as a witness. “She just didn’t want a big thing,” Ellen’s father said of the wedding, which, fair! Ellen herself had previously expressed that on her big day, there actually “will be no ‘big’ anything. It’s going to be very small.”

As for the couple’s post-wedding plans? Equally iconic. “We flew out on a red-eye Thursday night. Friday morning, we woke up, went to City Hall, had the wedding really quick, and then we went to Lupa for lunch after,” the Grey’s Anatomy alum said on Live with Kelly and Ryan in 2017.

Some of Ellen’s scenes are kinda awkward for Chris 👀

Chris has expressed that being married to a television star hasn’t always been a walk in the park for a number of reasons. The first? Her, erm, more romantic scenes on Grey’s Anatomy. He’s still supportive, but it can be a little awk sometimes. In a 2019 interview with Us Weekly, Chris confessed, “I would say I’m not jealous; I’m really confident, but it’s awkward” when discussing the steamier side of Ellen’s job.

“I remember in the beginning it was really hard for him,” Ellen even mentioned on the Ladies First With Laura Brown podcast in 2021. “Poor guy had no idea what he was getting into…He was like, ‘This is not what I signed up for. You go to work and make out with that. I like Patrick [Dempsey] and everything, he’s a good dude, but like really?'”

^ TBH, this would be me if I ever dated an actor, so I feel ya Chris!

Ellen and Chris have a total of three children together: Stella Luna, 13, Sienna May, 8, and Eli Christopher, 5. And like the tech-forward parent she is, Ellen shares the cutest pics of them all over her Instagram. Case in point? After the birth of her and Chris’s third child in 2016, she wrote on Instagram, “Chris Ivery just fell a notch…I’ve got a new guy” alongside this v tender post:

Plus, she’s also shared her experience raising her two older daughters: “My daughters are Black so it’s very important to me that they see a lot of images of beautiful, powerful, strong Black women,” she told People in 2020. More recently on Red Table Talk, she spoke about why having conversations surrounding race is important. “Don’t feel like you have to tiptoe. I’m not afraid to talk about race. A lot of people get very nervous when you bring it up, and I understand why they do, but I am not afraid,” she told co-hosts Jada Pinkett Smith, Adrienne Banfield-Norris, and Willow Smith. “These are important conversations to have and if you’re afraid to talk about it, that’s a problem right there.”

Aaaaand that’s pretty much all we know for now, but make sure to check back here for any more intel on Chris and Ellen’s ‘ship!

Kanye Storms Off Podcast After Facing Pushback On Antisemitic Claims