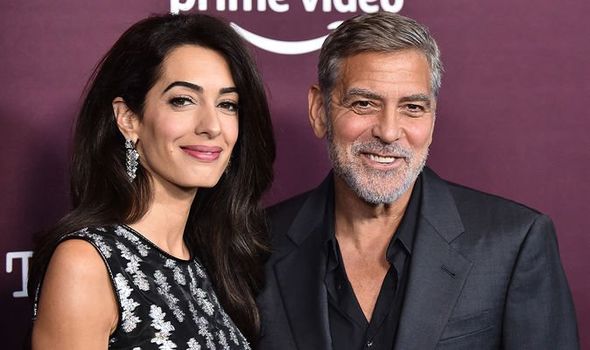 The 60-year-old Hollywood star and his lawyer wife, 43, were all smiles at the viewing of the Amazon Studios film. They were joined by cast members Ben Affleck, Lily Rabe, Tye Sheridan, Daniel Ranieri and Christopher Lloyd.

George even joined in as Ben held Daniel ‑ who plays his young nephew ‑ upside-down for a joke.

George and Ben have yet to act together but won an Oscar for Best Picture with Argo in 2012, which Ben starred in and directed and George co-produced.

The Tender Bar tells the story of Long Island boy J.R. ‑ played in later life by Tye ‑ who seeks out father figures at a tavern run by his uncle Charlie (Affleck).

His mother (Rabe) struggles to provide him with opportunities while they live with her father (Lloyd) so J.R. takes hold of his own destiny.

The film is based on J.R. Moehringer’s bestselling memoir of the same name. The screenplay is by William Monahan, who also wrote The Departed.

Lily appeared at the premiere with Hamish Linklater ‑ the couple are expecting their third child ‑ while Christopher Lloyd, of Back To The Future fame, was with his estate agent wife Lisa.

The film will be streamed on Amazon Prime Video from January 7.