We’re getting to know Melanie Brook!

The actress can currently be seen in the new Disney Channel Original Movie remake Under Wraps as Buzzy, who is the manager of Ernie’s Erie Emporium Halloween store.

The movie follows three 12-year-old friends, Marshall, Gilbert and Amy, as they happen upon and awaken a mummy, which they affectionately name Harold. Together, they must rush to return him to his resting place before midnight on Halloween.

Along the way, the team narrowly escapes a nefarious group of criminals who are determined to sell the mummy to the highest bidder. When Harold is inevitably captured, Marshall, Gilbert and Amy must band together to stand up to the criminals, face their fears and rescue their new—but rather “ancient”—friend. 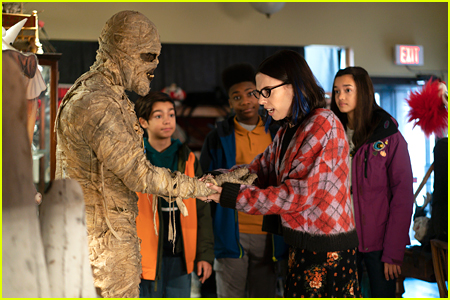 Under Wraps is currently available to stream on Disney+, and will next air on Disney Channel TOMORROW (October 16) at 5pm ET/PT.

Melanie, who originally hails from New York, can also be seen in episodes of Modern Love, Dispatchers from Elsewhere and Mrs Fletcher, and the movie Project Pay Day. Up next, fans can catch her in the upcoming movie Summertime Dropouts.

We got to know more about Melanie with 10 Fun Facts, including that she’s a huge fan of a certain musical artist (names someone who isn’t of this one!). Check out her fun facts below!