Ginger Zee just never stops! The popular meteorologist is always all around the country highlighting the issues of climate change with her informative reports.

However, all the travel can sometimes take it out of someone, and on Wednesday she shared her response when someone left a message about her appearance. In a comment to the star it was asked: “Why are your eyes so red?” And Ginger made sure that she had a classy response to the query.

The mom-of-two replied: “Because I woke up at 3 am ET, did the show, have a ton of makeup on and flew across the country off the plane to another shoot. Dry airplane middle seat lots of screen time. Just a guess.“

MORE: Ginger Zee shares snippet of time spent with her sons while off work

MORE: Ginger Zee celebrates son’s birthday in Miami during time away from GMA

Ginger is currently in Pacifica, California, where she is reporting on the oncoming storm that the town is soon to experience, alongside major cities in the state.

She showed how strong the storm would be on her Instagram Stories both with a photo of the storm system, as seen from space, and a video of her on Pacifica Pier at low tide. 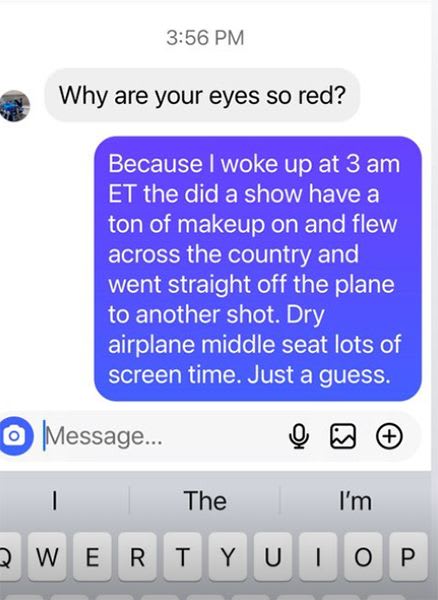 Ginger handled the question with class

In the short clip, waves could be seen crashing onto the rocks as Ginger explained the issues around coastal erosion.

LOOK: Ginger Zee unveils new look on GMA as her co-stars reveal what they think

The popular TV host has made it her mission to spread awareness about the issues of climate change, and has been open about her fears for the world that her sons will inherit. 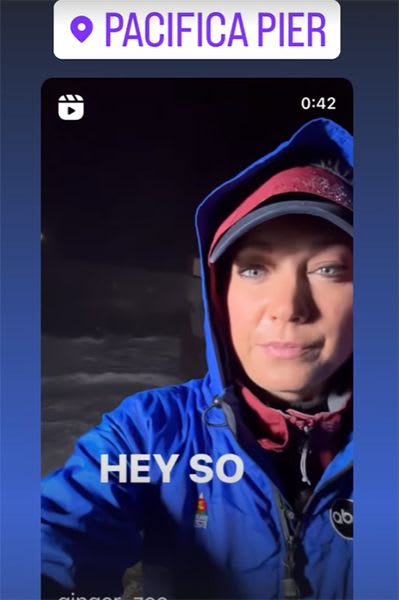 The star is in the middle of the storm

However, she said: “But, it’s a conversation, a lot of people are having,” going on to share a clip of a feature by Good Morning America which discusses the topic, including a quote Miley Cyrus told Elle, which read: “Until I feel like my kid would live on an earth with fish in the water, I’m not bringing in another person to deal with that.”

The series Ginger shared revealed that in a study conducted by Ipsos, 23% of U.S. adults from ages 18 to 45 said climate change has made them reconsider not having children.

The host further added: “On pure carbon emissions alone, yes, having one less child is one of the most significant ways to greatly reduce your carbon footprint. It would be like 24 people not having a vehicle.”