EXCLUSIVE: In this time of a global pandemic, the 78th annual Golden Globes intend to spotlight the foreign in Hollywood Foreign Press Association for Sunday’s Tina Fey and Amy Poehler bicoastal hosted ceremony. Yet, there’s still going to be a lot of old skool shenanigans and glamour onstage at NYC’s Rainbow Room and LA’s Beverly Hilton as well.

Unlike the Emmys or other award shows that have taken place over the last year, all the presenters at this year’s Globes will be live onstage on either the East Coast or the West Coast, Deadline has learned.

At this point, and things are still a little fluid for the live primetime February 28 show, the only exception to that plan is the handful of presenters who are also nominees, like Kate Hudson.

In the interests of strict coronavirus safety protocols and logistical peace of mind, the HFPA and MRC-owned dick clark productions have offered the latter group the prerogative to both present and accept their individual award from home or another remote location if they should prove the winner in their category. Soon after nominations were announced on February 3, camera kits were sent out to nominees all over the world. 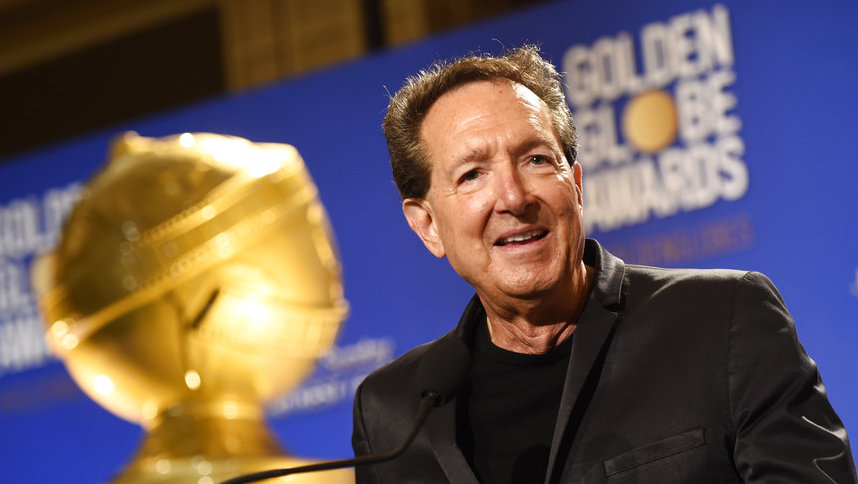 “I take my hat off to the Emmy’s for figuring it out in the first place, but I think we have upped the ante on this,” long time Globes EP Barry Adelman today told Deadline, stepping out of last-minute rehearsals in the International Ballroom at the swanky Bev Hills hotspot.

Which is how, from a cable strewn and production vehicle encamped Hilton that has become more like NASA’s Johnson Space Center than ever before, the Globes’ are aiming for an unprecedented international reach in 2021. Like it has for many years, the Globes will be seen in approximately 200 territories on Sunday, plus make its premiere on streamer Peacock on March 1.

However, in previous years, nominees jetted into town for the Globes. This year the Globes is uplinking to many of them because of Covid-19 concerns and potential quarantines. Working from more than 100 feeds around the world, this year’s shindig will be broadcasting from Australia, Ireland, Canada, the UK, Turkey, France, the Czech Republic, Germany, the Netherlands and the Dominican Republic as well as the duel host HQs and other locations in the good old USofA. 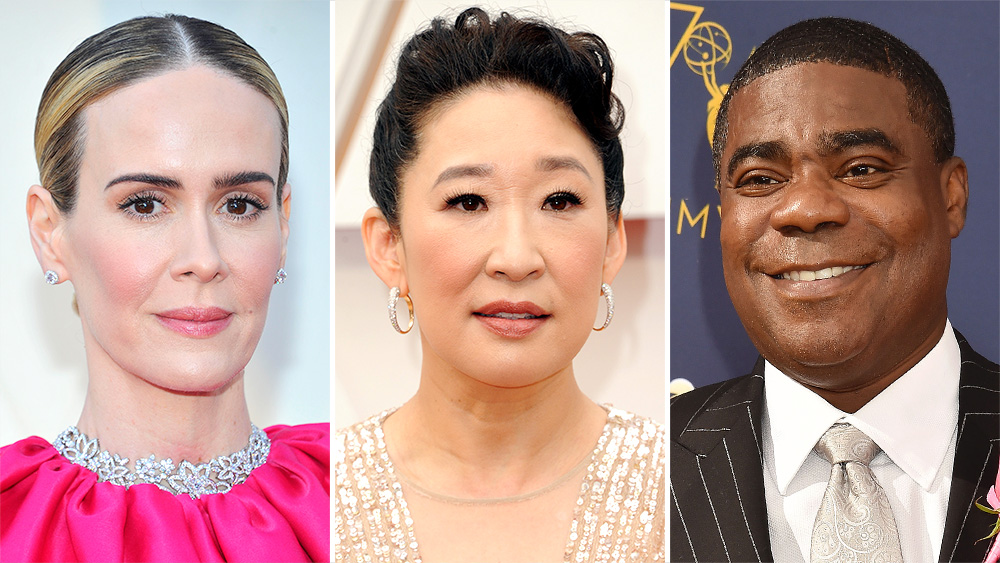 In an already pretty packed guest list of 150 A-listers and more, there are probably some further last-minute presenter additions and high-profile cameos to come for the show before Sunday. However, it looks like past Globes winners Sarah Paulson and Sandra Oh, as well as Fey’s old 30 Rock co-star Tracy Morgan will be unveiling winners this weekend, we can reveal.

The trio are joining the likes of Awkwafina, Cynthia Erivo, Joaquin Phoenix, Salma Hayek, Anthony Anderson, Angela Bassett and others as presenters.

Unlike his virtual stint on dcp produced Dick Clarks New Year’s Rockin Eve with Ryan Seacrest in December, Joe Biden will not be making a cameo of any kind directly at the Globes this weekend, despite wide spread rumors to the contrary.

With fiber feeds securing 1/3 of a second transmission between NYC and LA, the usually boozy Globes is opening up a virtual bar for nominees and attendees too.

In years past, traditional cutaways shots of say Viola Davis and Meryl Streep chatting backstage or Brad Pitt, Jamie Foxx and Quentin Tarantino talking at their table, have characterized the self-satirizing show. This year, the Globes aims to recreate that experience through technology and precise timing as a way to provide some off-stage action from SNL alums Fey and Poehler.

“What we’re doing is we’re going to get candid shots of the people at home and as they’re getting ready for their category,” executive producer Adelman explains. “And we found a way, without giving away too much, where they can kind of talk to each other if they’re in the same category and communicate with each other,” the dcp EVP of TV adds.

“So, it gives them a sense of camaraderie and it gives the audience a chance to see these wonderful actors and actresses communicating with each other like they would’ve done in the ballroom.”

Speaking of the ballroom, the Louie John Horvitz directed Globes have invited pandemic frontline and essential workers to sit masked and socially distanced in the audience in both the Beverly Hilton and the Rainbow Room. As has been previously reported, among those invitees are food bank workers, in part in recognition of the Globe’s philanthropic partnership this year with Feeding America,

Still, pandemic or not, the Adelman, Amy Thurlow and Linda Gierahn EP’d Globes aspires to hit the ground running on Sunday, virtually and live.

“You have Tina and Amy opening the show, you can’t come late because you don’t want miss that monologue and they’re going to be all through the show,” Adelman declares. “And the thing is, and this always happens with these great stars from Saturday Night Live, they’re working on things up till the last minute.”

The monologue may still be coming together for the returning co-hosts, but the run of show is pretty much locked with just over 48 hours until showtime.

“We go to commercial and we come back, and there’s another Golden Globes winner announcing another huge category,” adds Adelman, who is also a writer on the non-monologue portions of the show. “And that’s just for the start of the show.”

“That’s just the way the Golden Globes has always been,” Adelman says with satisfaction as work continues on the high-tech production in the background at the Hilton. “And even though our winners and our nominees are going to be at home, we are going to continue that pace.”

Amy Poehler, Barry Adelman, Co.
You may also like:

Oscars will will be shot like a movie, feature bigger roles for presenters, producer says

Khloé Kardashian Slams Instagram Critic Who Accused Her Of Being Insecure: 'I'm Sorry That You're Hurting'