The ‘Mildred Pierce’ actor insists there is no bad blood between him and fellow Aussie star Cate Blanchett after showing lack of enthusiasm when the actress won Critics’ Choice Awards.

AceShowbiz –Guy Pearce calls Cate Blanchett “incredible” after he sparked rumours he had a long-running feud with the actress. The “LA Confidential” actor, 55, shocked fans when he posted a series of now-deleted tweets about his fellow Australian actor after she won the Best Actress award for her performance in “Tar” at the Critics’ Choice Awards on January 15.

He began by retweeting a post by the Twitter account Celebrity Film Awards that announced the nominees in the category, which included Ana De Armas, Michelle Williams, and Margot Robbie along with Cate. “Please be Ana De Armas! Incredible performance!” he captioned his post.

Fans accused him of throwing “shade” at Cate when he followed up the message with a tweet after Cate won the award that said, “Fascinating choice… .” He also retweeted a post from one of Cate’s fan accounts that included images of the actress posing for a bondage-themed photoshoot, and remarked, “Ah, no thanks.”

Guy got rid of the messages when fans attacked him for appearing to criticise Cate, who is also tipped to win a Best Actor for her role as obsessive conductor Lydia Tar. He later tweeted on Sunday, January 22, 2023, “Fear not. No beef at all. I was merely being sarcastic. I adore Miss CB. She’s incredible… One of our best!”

Only his tweet pleading for Ana De Armas to win the Critics Choice award is still on his Twitter feed. 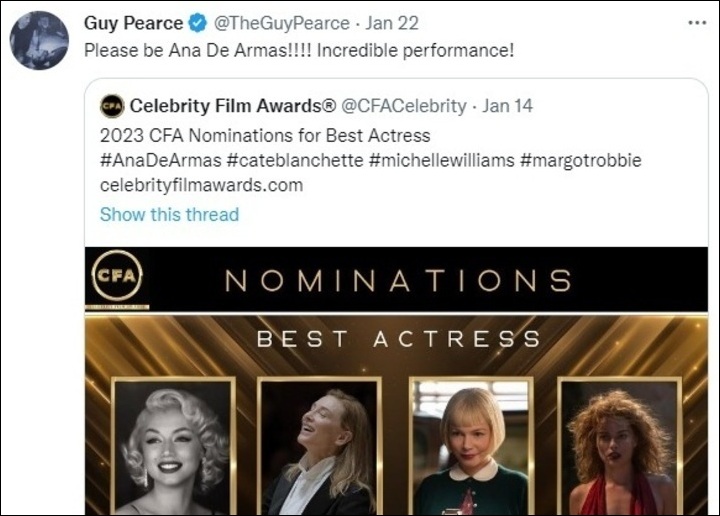 Fans have since unearthed a 2008 interview published by The Age newspaper in which Guy referenced a salary dispute with Cate. He had been set to star in the Melbourne Theatre Company’s production of “Poor Boy” at the time, but refused to take the same role for the Sydney Theatre Company, saying he would only do it if Cate, who headed the STC at the time, paid him the same salary she was getting.

He said, “If she does, it’ll be the most the STC ever paid an actor. I guarantee.”