Henry Golding Opened Up About His Intense Training for ‘Snake Eyes’

Since breaking through (and winning our hearts) in Crazy Rich Asians, Henry Golding has covered a lot of ground in his short movie career to date, constantly challenging himself in new genres.

He’s been a handsome ghost in Last Christmas (sorry, spoiler alert), a gangster in The Gentlemen, and now, he’s got his first major lead action role as Snake Eyes in the reboot of the GI Joe movie series.

Snake Eyes: GI Joe Origins sees Golding’s loner welcomed into an ancient Japanese clan called the Arashikage after saving the life of heir apparent Storm Shadow (Andrew Koji). The clan not only teaches Snake Eyes the way of the ninja warrior, but also provide him with something he’s been longing for: a home.

However, when secrets from his past are revealed, his honor and allegiance will be tested, and it could see him lose the trust of those closest to him.

We sat down with Golding over Zoom in June around the launch of the movie’s action-packed trailer, to get a taste of what fans can expect now that Snake Eyes has finally landed. 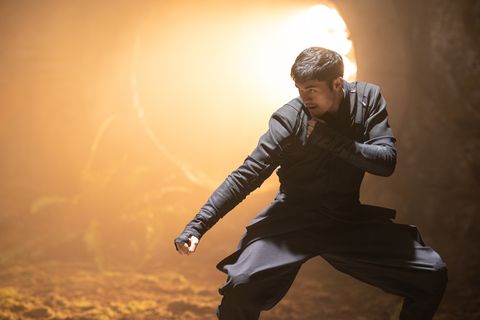 In a short space of time, you’ve covered a lot of genres and Snake Eyes marks your first action movie. Was the chance to do something new part of the appeal?

So when they approached me about it, it was also [director] Robert Schwentke’s idea of how he wanted to put this story across which was really important for me, because I didn’t want it to be just a generic action film that we’ve seen 100 times before.

There needed to be heart. There needed to be a real sense of story – and especially if you’re going to concentrate on one particular character, we need to know him truly in what his motivations are. It was too appealing to let go.

Growing up, were you a fan of the GI Joe series? Or did you not know too much about it before this role came along?

Very limited, to be honest, because much like yourself, I grew up in the UK [as well as] Malaysia. I didn’t really get hold of any of the material until it was a lot later on when some of the comics started being passed around.

For me, it was great to sit down with [GI Joe writer] Larry Hama, and pick his brain as to why he created these particular characters, and why Storm Shadow and Snake have this almost toxic yet brotherly relationship. 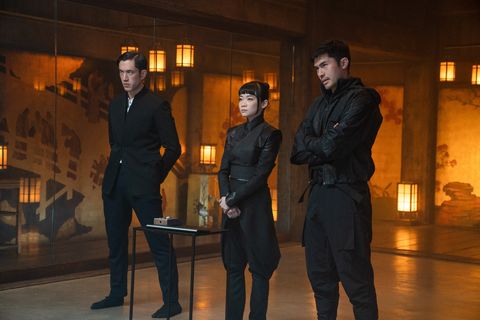 With it being your first action role, was the training a challenge?

It was super intense, but they got us to a stage where we did every single one of those choreographies and sequences ourselves.

Of course, there are parts where our much hardier and braver stuntmen had to come in and jump off a moving vehicle and a building [laughs]. But it got us to a stage where we felt very capable by the end of it.

I think standing on those car carriers and fighting hordes of combatants – I think that is one of the best sequences that we have in the movie. There’s a sneak of it in the trailer, but to see the full story unfold, and why they’re on top of it, and what’s happening, I can’t wait for everyone to see it.

As well as more authentic casting in this version of Snake Eyes, you also shot in Japan. How was that experience?

We had to do the Arashikage justice. It needed to be in the locations, which were equally as old as the clan themselves.

Working with the Japanese government, the producers were able to lockdown some of the most amazing sets. I wouldn’t say “sets” – but actual, physical locations. They were real, living castles and temples. It really helped – for an actor, especially – to be completely enveloped in that environment. 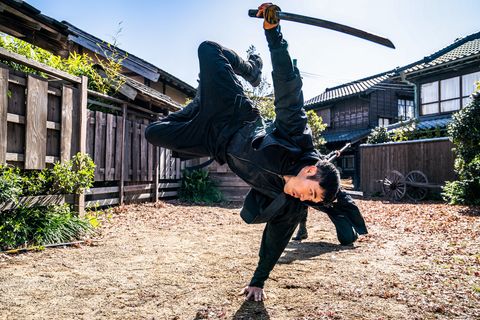 This is an origin story before Snake Eyes puts on the iconic mask, so are we right to assume that there won’t be connections to the other GI Joe movies?

I think we’re giving it a groundedness, and we’re taking our time with it. That’s why they really wanted to really zoom in on particular characters to tell the first story [in order to] launch the brand-new universe.

So this is just the start?

Oh, 100%, without a doubt, this is leading up to bigger and better things.

Did you manage to keep any props from the set to remind you of Snake Eyes at home?

I think I stole a pair of trousers [laughs]. I’ve got some great ninja trousers at home. But apart from that, you know, obviously we have Morning Light, which is the most iconic sword. But I think, you know, that still belongs to Snake.

There’ll be a time where I’ll be knocking on Paramount’s door and making a little request for one. But they had, at that point, one hero sword, so I wasn’t able to fit that in my pocket.

Maybe after the sequel… 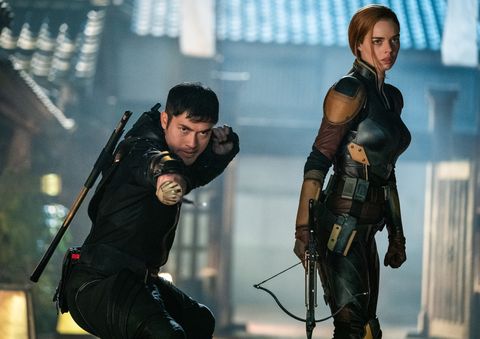 Just finally, we won’t bore you with the James Bond question, because you must be sick of that by now.

I’ve never had one of those.

Absolutely nobody has ever asked that, we’re unique. But because you’ve had all of these diverse roles so far, is there a particular role and genre you’re still looking at right now that you want to do?

Sci-fi. I’m a huge, huge fan of anything to do with a world beyond ours. So that is definitely on my target soon, just because I’ve loved that genre for the longest time, and have grown up watching it, and fantasizing about building those worlds. I think it would be super exciting to find something like that.

Snake Eyes: GI Joe Origins is out now in theaters.

About, Golding, Henry, Opened, up
You may also like: