Jamie Lynn took to Instagram to share photos of her eldest daughter, Maddie, going to her very first Homecoming dance a week after announcing her debut memoir.

They really grow up too fast! Jamie Lynn took to Instagram on Oct. 18 to share few photos of daughter Maddie Aldridge, ahead of her first homecoming dance! In the pics, the young beauty wore a lime green dress with ankle strapped heels for the occasion and opted to have her hair styled down in loose curls cascading down her back.

Maddie posed with family in the series of photos and not only does she look stunning, but she appears absolutely elated to attend her first homecoming. “HOCO 2021. don’t worry, I also can’t believe my baby’s growing up and going to her first dance and doing all the things that make time zoom by and stand still all at the same time,” Jamie Lynn wrote for her caption alongside a crying emoji.

Fans took to the comments to share their admiration of Jamie Lynn and her daughter. “How is this possible?!?! They are both so beautiful and growing up soooo fast!!!,” one fan wrote. While another wrote, “Oh my goodness! Homecoming??? I cannot believe it! I need all the details!,” to which Jamie Lynn responded with “my mom heart is still recovering,” alongside two heart emojis.

35 Cute Photos Of Celeb Moms Out With Their Kids: Gwen Stefani & More

Undoubtedly, the actress cares for her daughters, Maddie and Ivey Joan Watson, 3, however, she has been under a lot of heat as of late for her support, or lack thereof, for her sister Britney Spears, 39. As fans remember the singer testified about the “abusive” conditions of her 13-year conservatorship this past Summer and even took to social to address her family’s actions and lack of support.

In addition to Britney herself, the #FreeBritney fans also didn’t think Jamie has supported her older sister enough and she has had to voice her support and her actions. On June.28, the actress tearfully opened up on Instagram and expressed her actions by saying the “only reason I haven’t before is because I felt like until my sister was able to speak for herself and say what she felt she needed to say publicly, that it wasn’t my place, and it wasn’t the right thing to do.” 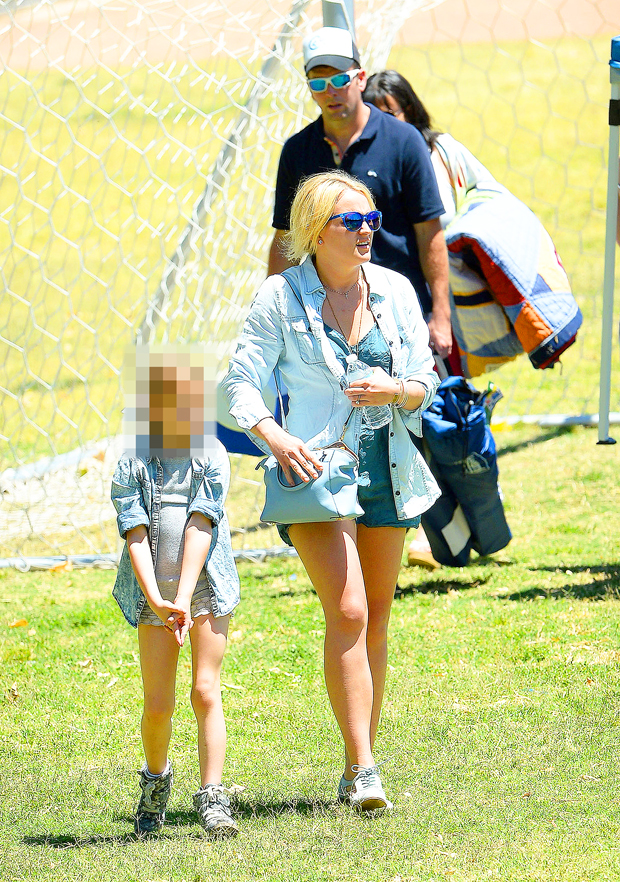 Now that the conservatorship is coming to an end, the blonde beauty has revealed on Oct.11 that she is releasing a memoir, Things I Should Have Said.

“I can’t believe I finally finished writing my book!!! “THINGS I SHOULD HAVE SAID” has been in the works for quite a longggg time now,” the actress wrote. She continued, “I’ve spent my whole life believing that I had to pretend to be perfect, even when I wasn’t, so for the first time I am opening up about my own mental health, because this process challenged me to have to be painfully honest with myself, and face a lot of hard things, that I normally would have just glossed right over like I was taught to. I owe it to myself, my younger self, and to my daughters to be an example that you should never edit yourself or your truth to please anyone else.”

Her caption hinted at the challenges she has faced in her life as well as the importance of having a safe space for ample growth. Jamie finished her post by writing, “Last but certainly not least, I want you all to know, YOU matter, YOUR story matters, YOU are enough, and don’t ever let this world try to convince you otherwise.”