The Oackland resident, who breaks record the most consecutive wins by a woman on the long-running game show, shares the terrifying news on her Twitter account.

AceShowbiz -“Jeopardy!” winner Amy Schneider revealed that she fell victim of robbery over New Year’s weekend. Amy, who breaks record the most consecutive wins by a woman on the long-running game show, shared the terrifying news on her Twitter account on Monday, January 3.

“Hi all! So, first off: I’m fine. But I got robbed yesterday, lost my ID, credit cards, and phone,” the Oakland, California, resident and Ohio native wrote to her followers. “I then couldn’t really sleep last night, and have been dragging myself around all day trying to replace everything.”

After going through the horrifying experience, Amy shared that she might not be able to do her usual game report. “So, I doubt I’ll even start writing tonight’s game thread today, and if I keep winning, it may take a bit for me to get caught up. Thanks for your patience!” she added. 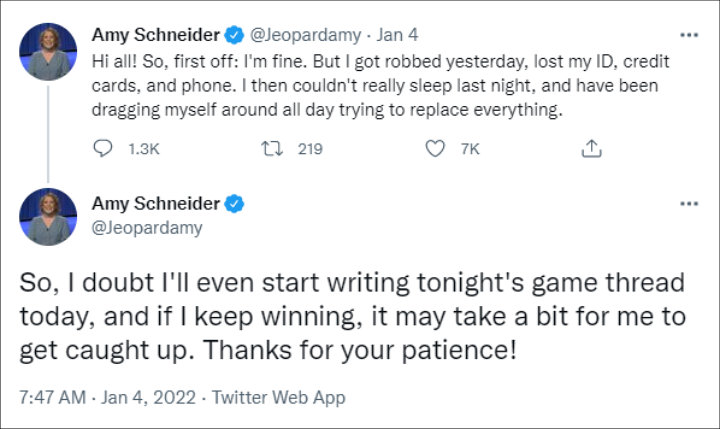 Amy Schneider revealed she was robbed.

Upon reading the tweets, fans hoped that Amy continues to be safe. “Don’t worry about the game report, Amy, do what you need to do to take care of yourself. I hope you have identity theft protection like Lifelock, it can be a big help. I hope they catch the person who did this. You’re safe and that is most important,” one fan replied.

Another person wrote, “Oh my gosh…that is awful and traumatizing. I am glad you are physically ok, but hate you experienced a robbery. Take care of yourself. You have been so fun to watch.” One comment, meanwhile, read, “Being robbed feels like a violation of one’s self, as well as a huge set back in terms of the material, but even more it is a robbery of time and energy. Even if you weren’t physically assaulted?, it takes time to heal emotionally. This is not your fault.”

Prior to this, Amy took to her page to address transphobic comments that she got after breaking record on “Jeopardy!”. “I’d like to thank all the people who have taken the time, during this busy holiday season, to reach out and explain to me that, actually, I’m a man,” she sarcastically tweeted on New Year’s Eve, blasting her haters. “Every single one of you is the first person ever to make that very clever point, which had never once before crossed my mind.”