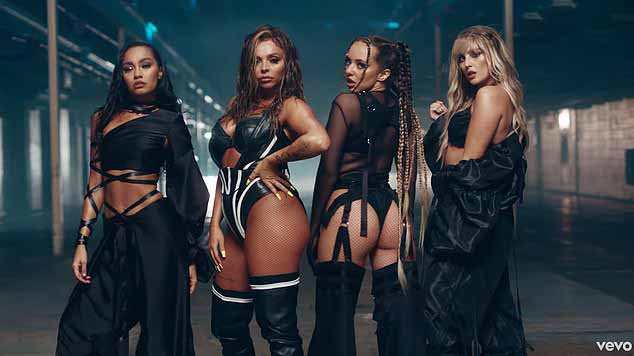 Jesy Nelson no longer speaks to her former Little Mix bandmates, saying there ‘has to be distance’ between them following her departure from the band.

Last December, Jesy quit Little Mix after nine years, citing the strain being in a girlband had on her mental health.

Leigh-Anne Pinnock, Jade Thirlwall and Perrie Edwards have continued on as a trio, while Jesy is about to embark on a solo career with the release of her debut solo single Boyz.

While she refers to her former bandmates as ‘sisters’, Jesy had admitted that they have not spoken since she left the band, and she has not met Leigh-Anne and Perrie’s children.

Speaking to Glamour, the 30-year-old said: ‘I haven’t spoken to the girls. It is weird because for so many years we were as close as sisters, together every hour of the day for weeks, sharing beds, laughing, crying just 24/7 the four of us together and then… Nothing.’

When asked if she has seen Perrie’s son Axel, who was born in August, or Leigh-Anne’s twins, who were born days before, Jesy said no and added: ‘I’ve sent a few texts, but that’s it. I can’t explain it, it’s like there has to be this distance. We were so close so you can’t do in-between, there has to be space and hopefully…

‘Hopefully at some point in the future we can all come back together. I love them. They are my sisters in so many ways, but for the time being we just don’t talk.’

The most social media interaction between the girls since Jesy’s exit has been the singer liking her bandmates’ baby posts, and the Sweet Melody stars thanking Jesy in their Brit Awards acceptance speech.

However, Jesy stressed that her problem was never with Leigh-Anne, Jade and Perrie, but the pressure of being in a girl bad and being constantly compared to her friends.

While two thirds of Little Mix have now become mums, Jesy told the magazine that she does not want children, saying ‘it’s just not in me’.

The former X Factor star said: ‘I think as a woman, [motherhood is] either in you or it isn’t. You either have that maternal feeling or you don’t, and I’ve never had that feeling. I think women have to do what is right for them.

‘My mum is my hero. She brought up four kids single handed. To me she is Wonder Woman, but I know it was hard. There’s never been a part of me that’s thought, “Oh, I’d really love a baby.” I’ve been so in love, thought “this is the one for me,” but [I’ve] still not wanted a baby.’