The 17-year-old has not made any public statements on the matter, but she posted a photo of herself wearing a t-shirt which says, “Best. Gay. Cousin. Ever.”

JoJo also thanked her cousin for sending it, “Thanks for the shirt cousin.”

Earlier in the week, fans noticed that she seemingly came out when she posted a new video on TikTok where she sang along to a line from Lady Gaga‘s “Born This Way.”

Dancer Kent Boyd also posted a video, which seemed to confirm it as well.

The entertainer has been getting A LOT of love on social media from fans for coming out.

“jojo siwa coming out when her audience is primarily younger is so brave and going to have a overwhelmingly positive impact on lgbtq+ kids,” one person wrote on Twitter.

JoJo also just uploaded a brand new YouTube video where she goes through a transformation and debuts a “normal” teenager look, sans glitter and flashy bows/outfits. 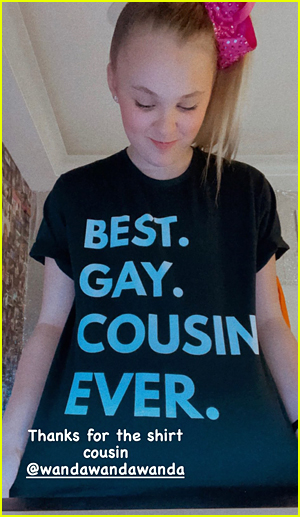 Source: Read Full Article
JoJo Siwa
You may also like: