Kourtney Kardashian has shared the best response to pregnancy rumors, after her latest underwear selfie sparked speculation on Instagram.

Taking to Insta, the Poosh founder posted a collection of gorgeous mirror selfies, snapped behind the scenes on her latest shoot for new vitamin line Lemme. The pics see Kourt posing in a matching nude underwear set, while one photo also shows her placing one hand on her stomach.

The 43-year-old added the caption, “a little BTS from my @lemme campaign shoot,” while sister Khloé was quick to comment, writing, “Goodness you’re gorgeous.”

Fans were also keen to come forward with a whole host of compliments for Kourtney, with one commenting, “Real body! So refreshing 🔥😍.” Meanwhile, others began speculating on whether Kourtney might be pregnant, prompting the reality star to shut down rumours with a brilliant comment.

One follower wrote, “Wait a minute did I miss that she’s pregnant?” Kourtney then replied to the comment, writing back, “Nope, but you’re missing a woman’s body.”

Huge props to Kourtney for this response 👏. 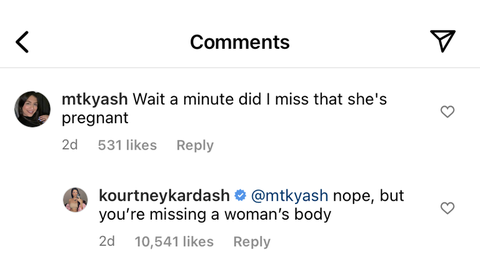 This isn’t the first time we’ve seen Kourt expertly shutting down pregnancy rumours. She previously clapped back at Insta commenters speculating on whether she could be pregnant with the simple question, “Are we really gonna do this every time I post a photo?” Meanwhile, another post saw her replying to pregnancy comments with the response, “I’m a woman with a BODY.”

Kourtney and new husband Travis Barker have been very open with fans about their fertility journey over the past six months. Most recently, the newlyweds revealed that they’ve put pause on having IVF, with Kourtney telling the Wall Street Journal last week, “We started an IVF journey, but I stopped. It was a lot.”

“I took a break to just focus on our wedding and getting married,” she continued, adding that she’s now preparing her body to start the process again.

We’re very much here for Kourtney shutting down rumors.

Lori Loughlin cleans her own windshield as she fuels up her SUV, plus more great celebrity photos this week