In the note accompanying throwback photos of the mother-daughter duo, the momager gushes over the Kylie Cosmetics founder as saying, ‘You are so kind, generous beyond belief and so loyal, compassionate, and loving.’

AceShowbiz –Kris Jenner is celebrating her daughter Kylie Jenner‘s 24 birthday. In a sweet tribute she shared on her social media platform, the momager credited her “amazing daughter” for being her inspiration.

On Tuesday, August 10, the 65-year-old took to her Instagram account to mark Kylie’s birthday with photos of the Kylie Cosmetics founder over the years. “Happy Birthday to my littlest angel @kyliejenner!!!! I can’t believe how fast time goes by!!!” the proud mom wrote in the caption. “You make every day extraordinary and your talent and creativity in everything you do amazes me,” she continued before thanking her youngest daughter for being her inspiration, “Thank you for being an inspiration to so many …especially me.”

Elsewhere in her sweet message, Kris said, “If I close my eyes it still feels like yesterday you were riding ponies down the street and bringing home stray cats…And playing with my makeup!!!!!!” The “Keeping Up with the Kardashians” alum went on gushing over Kylie, adding, “You have brought all of us so much joy!!! You are the most amazing mommy!!!!”

“The most amazing daughter, sister, friend, confidant and advisor and you are so wise beyond your years. You are so kind, generous beyond belief and so loyal, compassionate, and loving,” Kris raved. She then concluded her post by expressing her love to Kylie as saying, “I love you so much and I am blessed to be your mommy.”

Celebrating Kylie’s birthday was also his ex Travis Scott (II). The 30-year-old rapper paid tribute to her via Instagram Story with a photo taken at their daughter Stormi Webster’s birthday party. Over the candid pic, he penned, “WAKE UP IT’S YOOOO BDAAYYYYYY.” 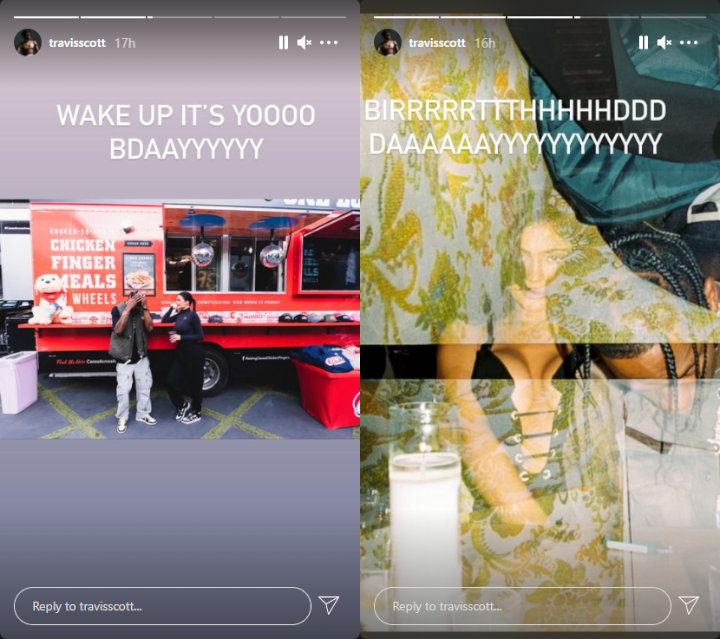 In a following Story, Travis posted an artsy snapshot of the former couple, who called it quits in October 2019. The makeup mogul could be seen striking a pose in a black corset. Meanwhile, the “Sicko Mode” spitter was photographed facing away from the camera as he looked down. “BIRRRRRTTTHHHHHDDDDAAAAYYYYYYYYYYYY,” he captioned the pic.

birth, Kris Jenner, Kylie Jenner
You may also like: