Cole Barnett is taking some time to focus on himself after Love Is Blind.

The 27-year-old reality star hopped on Instagram Thursday to answer some questions from fans, including about what he’s been up to following the Netflix series. When one fan asked Cole what he’d “been working on” since season three of the show wrapped, he shared:

“I’ve been flipping houses, representing buyers, and working on starting a podcast!”

“Oh and some much needed therapy.” 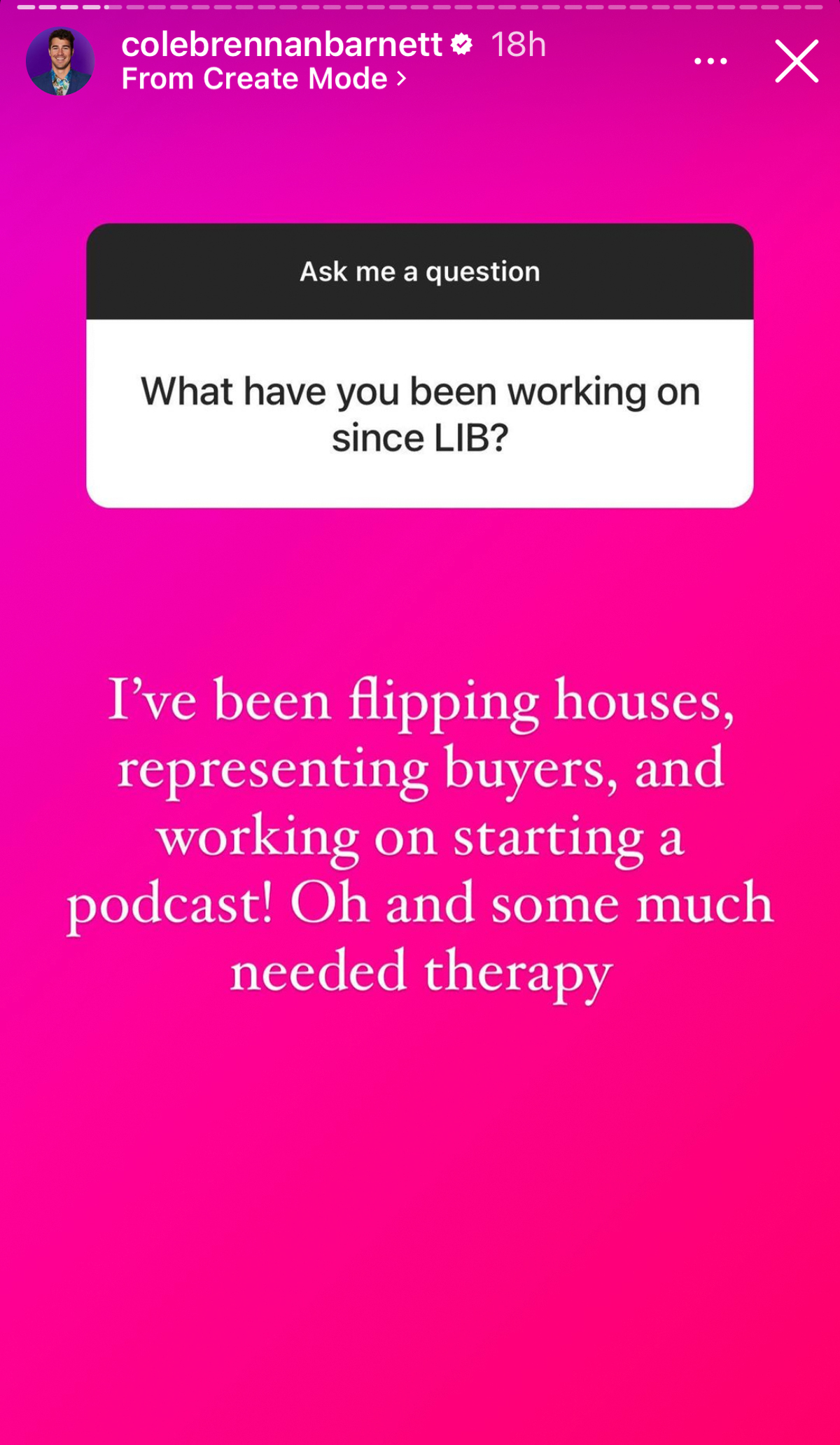 In a follow-up video, the realtor really got into it, opening up about what he’s taken away from therapy:

“The best thing I’ve gotten from therapy so far is honestly just how helpful it is to talk about the things that have impacted you or hurt you or were traumatizing. It’s not that there’s some grand thing that you need to learn, necessarily, there’s a lot of things you can learn. But sometimes as a guy you just don’t ever talk about emotions and feelings, you never do, so just sitting with someone and talking about those things in and of itself is freeing and liberating.”

As fans know, Cole and his former fiancée Zanab Jaffrey dealt with some controversy on Love Is Blind. He proposed to Zanab after forming a connection in the pods. But once they stepped out into the real world? Their relationship soon began to crumble, as they got into several arguments — including one in which Cole asked if the 32-year-old was “bipolar.” When the pair were at the altar, Zanab ultimately decided to turn down her fiancé because he had “single-handedly shattered my self-confidence.” Oof.

During the reunion episode, Zanab opened up about what happened between her and Cole throughout the season, accusing him of commenting on her physical appearance, body-shaming her, and controlling what she ate. It reached a point where she “stopped eating” because of his remarks:

“I was eating like a banana and a teaspoon of peanut butter just so I wouldn’t pass out on the long days we were filming.”

She specifically pointed to an unaired “cuties” scene of him questioning if she planned to eat two clementines before dinner. After Netflix showed that moment after the reunion, many viewers quickly turned on Zanab and accused her of overreacting to the moment.

Clearly, viewers forgot the moments when Cole kept comparing Zanab to Colleen Reed before this scene and saying how she wasn’t physically his type like their co-star. Or the time when he rated them based on their attractiveness, calling Zanab a nine out of ten and saying Colleen was a ten out of ten. The backlash resulted in Zanab penning a message to Cole and the internet, in which she said:

Glad to hear Cole’s is taking a moment to work on himself after the show. Hopefully he’ll spend some time looking at how he treats women and why… Reactions, Perezcious readers? Let us know!

Kirstie Alley said she 'regretted' appearing on Oprah in a bikini