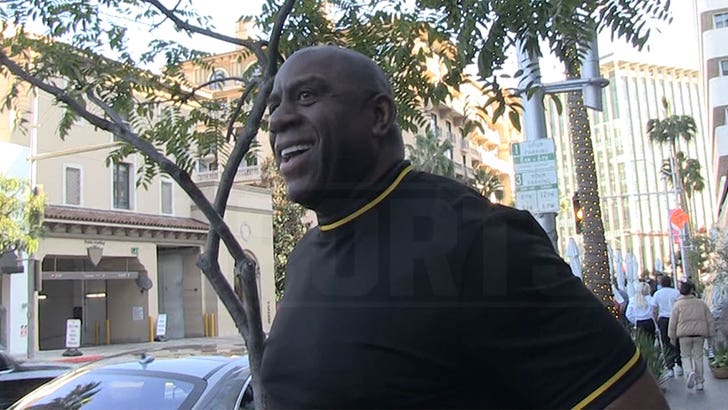 Magic Johnson says he won’t be tuning in when HBO’s “Showtime” Lakers series comes out … telling TMZ Sports he’s “not looking forward to it.”

“Winning Time: The Rise Of The Lakers Dynasty” — starring John C. Reilly, Sally Field and Jason Segel — is a highly-anticipated new drama series that covers the professional and personal lives of the 1980s Los Angeles Lakers.

While most people are excited to watch the show, Magic ain’t one of them … saying he’s working on his own project.

“No, we got different shows coming out,” Magic tells us. “I got one, then you got Jeanie Buss got one on Showtime coming out.”

“Those are the ones I’m looking forward to.”

Of course, Magic helped lead the “Showtime” Lakers to 5 NBA championships in the ’80s … alongside fellow NBA legends Kareem Abdul-Jabbar and James Worthy.

Johnson’s Lakers have been celebrated over time … for the impact they had on the league and for the up-tempo, fast-paced style of play they cultivated.

But Magic seems very adamant he’s not thrilled about the release of the HBO project … saying, “I’m not looking forward to it. I’m going to leave it at that.”

The series drops in March … and don’t expect a review from Magic.