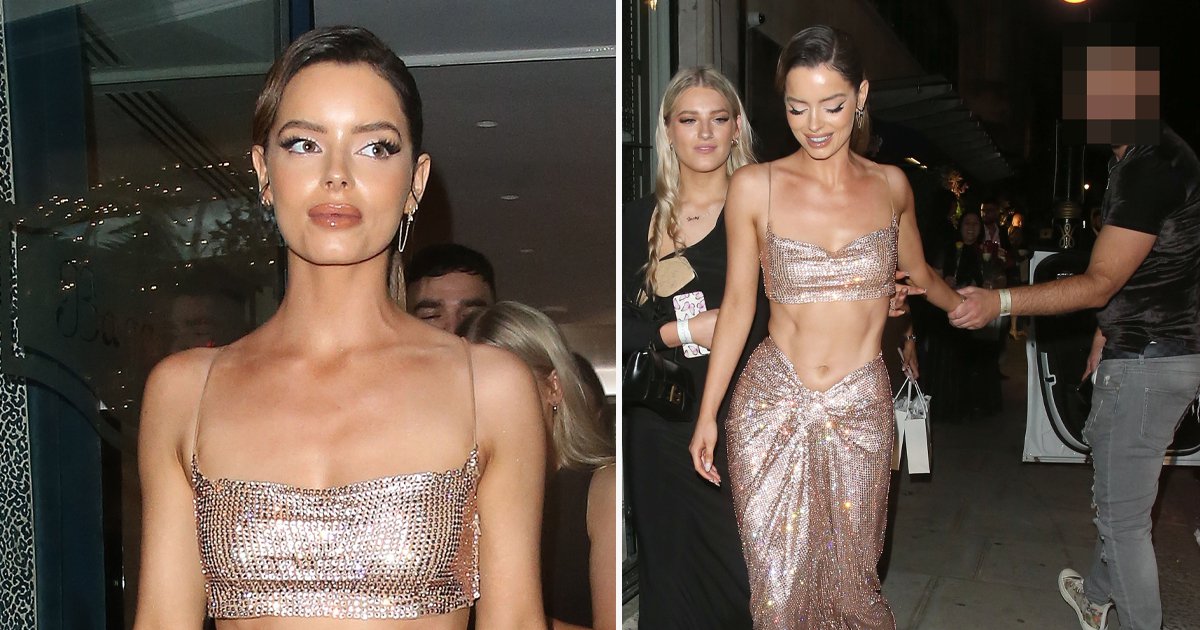 Maura Higgins has recalled a scary incident that occurred when she was leaving a venue following the National Television Awards last week.

The Love Island star had attended the annual awards and heading on to an after-party, but revealed on her way home a random man had grabbed her arm.

Calling out the ‘actively predatory’ behaviour and raising awareness of street harassment, Maura explained how the man – who she had never met – then attempted to pull her back towards his car.

She told fans luckily she wasn’t alone and was in the company of two women, so she was able to get away but insisted incidences like this are the reason why she ‘never leaves a venue alone at night’.

Prior to sharing pictures of the moment the man grabbed her, Maura shared a ‘scary’ video of a girl, who was sat alone at a bar, being targeted by two men.

She then shared her own experienced of being harassed and told her followers: ‘For people that think this does not happen… I can assure you it does!!

‘Here is an image of me leaving a venue after the NTAs – this guy that I have never met in my life grabbed hold of my arm and tried to pull me back towards his car.’

While she appeared to be smiling in the picture, Maura insisted she was uncomfortable but was conscious of reacting to the man while being photographed as she didn’t want the situation to be misinterpreted as her getting ‘angry’ or ‘violent’.

A second photo saw Maura throwing her arm up into the air to get away from the man who had headed back to his car.

‘Luckily I had 2 girls walk with me to my car and I would NEVER leave a venue alone at night because of this reason,’ she continued.

‘It’s actively predatory, repeatedly violating women’s personal space and boundaries. His behaviour is completely inappropriate and it’s crucial that we address the issue of street harassment.’

Maura then shared a video of a teen dancer revealing that she was harassed on her way home from a dance class and was forced to run home while on the phone to her dad.

In the video, the girl explains: ‘Not to be that girl again, but I’ve literally just walked home from dance and as I was walking home this man started harassing me, he was following me home, he wouldn’t leave me alone. I rang my dad.

‘Luckily these three men were behind me, these old men, and they asked if I was alright and they walked with me a bit, so this guy then started on these three men and he just wouldn’t leave me alone, so they tried to back him off a bit while I ran.’

She revealed: ‘This is three occasions now that this week that men have either said something to me or harassed me, what gives them the right? I just don’t even have any words. I’m just appalled.’

Maura added three mind-blown emojis to the video as she shared it with fans to shine a spotlight on how women are forced to endure such unwanted behaviour.

The Irish reality star had attended the star-studded NTAs alongside a whole host of celebrities, including Ant and Dec who were winners on the night and bagged best TV presenter for the 20th year running.

Her appearance at the awards comes after Maura was seen declaring her love for boyfriend Giovanni Pernice on his birthday.

She and the Strictly Come Dancing professional first went public with their relationship in July.

Marking the dancer’s birthday, Maura said in a sweet tribute she shared online: ‘Happy Birthday to the man who makes me feel beautiful and loved every single day, You make my world complete. I love you ❤️ @pernicegiovann1.’