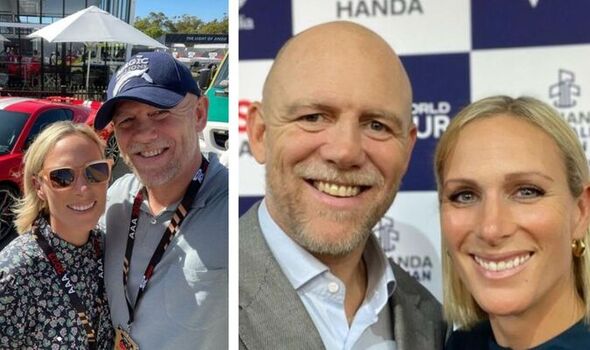 While the likes of Boy George were keen to flee the I’m A Celebrity jungle Mike Tindall is taking his time and enjoying some events around Australia before heading back to Britain.

The former rugby ace is now making the most of his freedom after three weeks of roughing it on I’m A Celebrity and gearing up for a motor-racing event in Adelaide, followed by a rock concert starring The Killers.

Mike Tindall took to Instagram and shared a sweet photo of the pair surrounded by cars at the Adelaide500 – the largest domestic motor sport event in all of Australia.

He also revealed to his 488,000 followers that the pair had taken to the track themselves in an adrenalin-boosting Corvette, posting a short POV video that he’d shot while in the driver’s seat.

Meanwhile, Mike, 44, whose wife Zara is the granddaughter of the late Queen, admitted to forming a special connection with Coronation Street star Sue Cleaver, who he branded his “camp wife”.

“I’m sorry I had a camp wife in there, but she was brilliant,” he told Zara after their emotional union, as she teasingly retorted: “Cheating on me!”

However, there are no hard feelings between herself and Sue, who were pictured with their arms around each other smiling warmly at the glitzy I’m A Celebrity wrap party.

After reuniting with wife Zara and spending time at the JW Marriott hotel on the glitzy Gold Coast, Mike Tindall has since travelled right across the country to enjoy the Adelaide 500 event more than 2,000km away. Pictures posted to his Instagram account showed the pair surrounded by cars on their “whistlestop Aussie tour”.

Mike Tindall shared a photo of himself “getting the microphone ready” for the Killers’ eagerly-awaited performance this weekend, as he strode on the stage. He added mischievously that the next part of the agenda would be “wine tasting”.

I’m A Celebrity star Mike Tindall and Coronation Street actress Sue Cleaver might have formed a close bond in the jungle, with Sue admitting the rugby ace had been her favourite, and him tenderly comforting her when the homesick star had started crying, Zara was keen to meet her too. The pair posed together at the I’m A Celebrity wrap party.

Delighted to be back in each other’s arms, the pair warmly embraced, before Mike Tindall shared their emotional selfie with his 488,000 Instagram followers.

Mike Tindall also reunited with his children after leaving the jungle

Mike Tindall’s three children were ecstatic to see their father again after the distance between them when he was on I’m A Celebrity – and Mike also recently enjoyed a trip to SeaWorld with eight-year-old Mia, four-year-old Lena, and the baby of the family, Lucas, who is just 20 months old.