Another day, another bombshell Donald Trump audio recording. The authors of “I Alone Can Fix It,” Washington Post reporters Carol Leonnig and Philip Rucker, appeared on Anderson Cooper 360 to share the audio, which they recorded during interviews for the book, and the jaws they are a-droppin’.

The new tell-all book, one of many to come out in 2021, attempts to recount the entire final year of the Trump presidency, starting with when he was first briefed about the coronavirus in January of 2020, up to the insurrection attempt in January 2021. The book is definitely not flattering to the former president, and, according to an NPR review, depicts Trump as more concerned with how the pandemic would impact his reelection than with how it was impacting the country.

In the audio shared on Anderson Cooper’s show, former President Trump also appears pretty sympathetic to the demonstrators-turned-rioters who stormed the capitol on January 6. Here’s what he said.

Trump says some surprising things about the insurrection 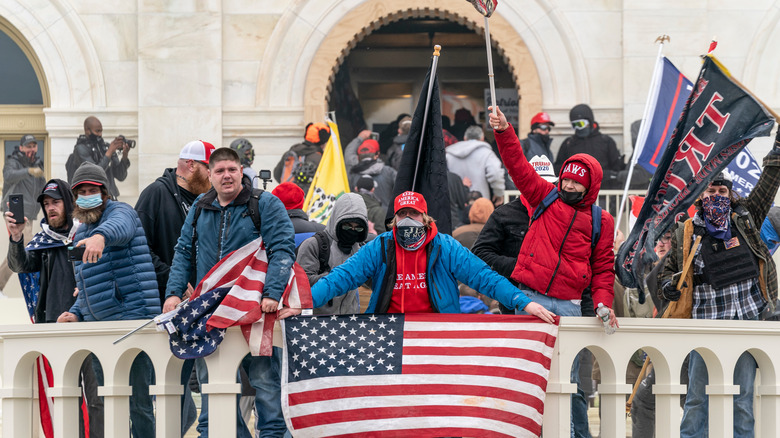 In the audio clip played on CNN, journalist Carol Leonnig asked former president Donald Trump what he wanted the crowd of insurrectionists to do when he told them to “go up there,” referring to the capitol building. The clip was from a two-and-a-half-hour interview Leonnig and Philip Rucker had with the former president, and it’s Trump’s answer to this question that has people shocked.

“Personally, what I wanted is what they wanted,” Trump said. “They showed up just to show support because I happen to believe the election was rigged at a level like nothing has ever been rigged before.” There is no evidence that the election was rigged or in any way fraudulent. Trump also says in the interview that the January 6 mob was a “very loving crowd” who were “ushered in” by the police. Recorded video of that day paints a different picture.

Anderson Cooper’s immediate reaction was, “This is like listening to Nixon drunk rambling.” And on social media, others seem to agree, saying the former president sounded “sick” and “delusional,” with one simply writing, “a fire hose of lies.” As for what the interviewers themselves thought, Rucker said, “Again and again he would say things that weren’t true as if they were true — as if when you enter Mar-a-Lago and sit there in the lobby, you’re in a different universe with a different set of facts.”

Audio, Newly, on, released, Trump
You may also like: