The former ‘Good Morning Britain’ host is slammed by celebrities like Elijah Wood, Chelsea Handler and Richard Marx after calling the artistic gymnast’s decision a part of ‘this culture of celebrating weakness.’

AceShowbiz –Piers Morgan has landed in hot water for his controversial take on Simone Biles‘ withdrawal from Tokyo Olympic Games. Known for his unpopular opinions, the British TV personality has been slammed by fellow celebrities after dubbing the athlete’s decision to quit the competition a sign of “weakness.”

“Athletes are now deemed more courageous, inspiring & heroic if they lose or quit then if they win or tough it out, which is ridiculous,” so he tweeted on Tuesday, July 27. Blaming social media for glorifying this trend, he added, “I blame Twittervs virtue-signallers for fuelling this culture of celebrating weakness. The real world doesn’t think like that.”

Many have since voiced their disagreement with Piers. One of them was actor Elijah Wood who clapped back at the former “Good Morning Britain” host, “hey Piers, you couldn’t even begin to conceive of what it could possibly feel like to be an athlete at that level with that amount of pressure. sit down. you’re impulse to stir the pot is not only routine but terribly unbecoming and boring.”

Chelsea Handler sarcastically remarked, “It’s amazing that women get called ’emotional’ when I have never seen more men throwing tantrums about Simone Biles.” Richard Marx, meanwhile, slammed Piers as saying, “Again, please let @piersmorgan (who is so ‘heroic and brave’ that he blocked me) know that I said he’s a gutless degenerate of a misogynistic hypocrite and to go f**k himself ‘cuz clearly no one else will. Thanks!”

“Up” actor Ed Asner also chimed in, “Not surprised to see this from the likes of @piersmorgan. A person (I use that term lightly) that sits on his brains and criticizes people for a living. @Simone_Biles is a hero. She stood up for herself in a very difficult position.”

Catching wind of the debate, Piers is still unapologetic. On Wednesday, he returned to the micro-blogging site to respond to the chatter. “So, to sum up today’s big Simone Biles debate, snowflake Twitter is 100% adamant that walking out on teammates at work is brave, strong, inspiring and iconic – and anyone who does it should be celebrated as one of the world’s great heroes…,” so he wrote, “Good to know.” 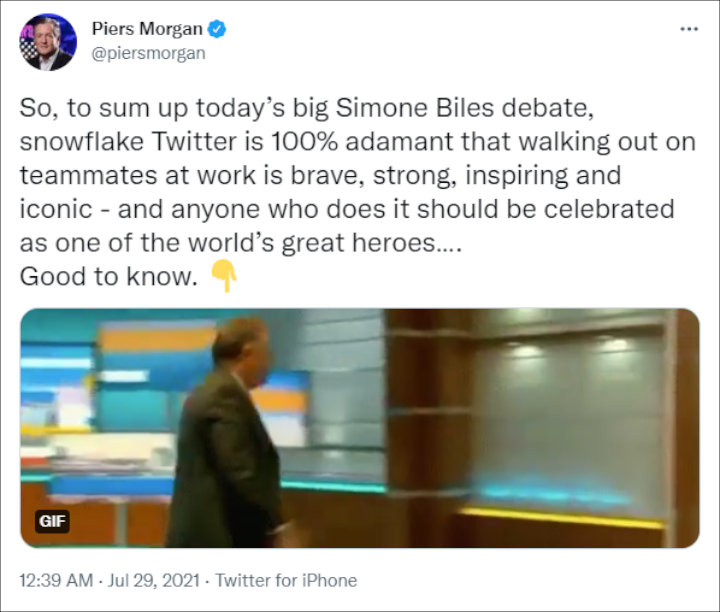 The British TV host doubled down on his remarks about the American gymnast’s withdrawal.

Simone announced her decision to withdraw from the Olympics on Tuesday, July 27, tearfully speaking in front of reporters, “My pride is hurt a little bit. After the (vault) performance that I did (on Monday), I didn’t want to go into the other events so I thought I would take a step back.” She added, “I have to focus on my mental health and not jeopardise my health and well-being.”

The 24-year-old later expressed her gratitude for the support he received. “the outpouring love & support I’ve received has made me realize I’m more than my accomplishments and gymnastics which I never truly believed before,” she tweeted on Wednesday.

Criticize, piers morgan, Si, slam
You may also like: