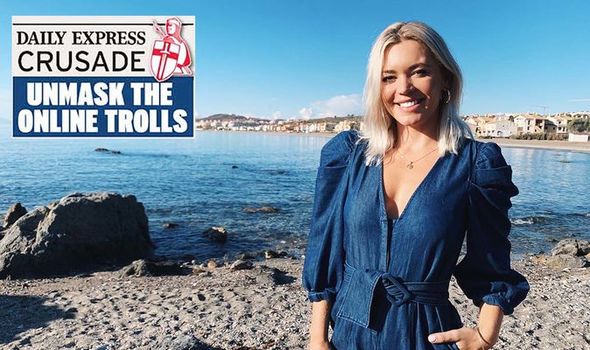 An accomplished TV presenter with model good looks, Danni Menzies should be lauded for her success but instead reveals she was left broken by online trolls. A regular host of Channel 4’s A Place In The Sun, Danni might look poised on screen but, away from the camera, she has faced deeply abusive behaviour.

The 32-year-old star has been branded “a slut” and “hooker” by anonymous social media accounts but she is not the first female celebrity to be targeted this way.

Former Little Mix star Jesy Nelson has admitted to attempting to take her own life after vile trolls criticised her appearance, while Love Island host Caroline Flack was the victim of appalling online abuse in the weeks before her 2019 suicide.

Yet despite a history of depression and anxiety, Danni has found the strength to crack down on online hate.

“People are snarky and awful online because they can be anonymous,” she says.

“It’s been so hard to not react to abuse but, over time, I have learnt to grow a thick skin and to try not to let anything like that get to me,” she says.

With vitriolic behaviour on the internet on the rise, Danni believes that anonymous social media accounts should be banned and fully supports the Express’s Unmask the Trolls campaign.

And she reveals that the women ‑ far from being supportive ‑ can be more vicious than the men in their abuse.

“Most of my followers are men and 75 percent of followers on my Instagram are male, so they don’t really care, but I have had nasty comments and some woman on Twitter the other day was giving me abuse, saying I looked like a slut and a hooker.

“But I know to never react with a negative message ‑ that just fuels things ‑ so instead, I sent her a nice one saying, ‘I love that women are supporting women. You look great today’, and then I blocked her.”

“Luckily the general demographic of people who watch A Place In The Sun are of an age where they are a bit more mature so they don’t feel the need to be like that.”

Now Danni is fighting back and trying to overcome a long history of depression and anxiety ‑ and admits she now feels nothing but pity for her perpetrators.

“The majority of the time someone saying something negative to you is a reflection of how they are feeling inside themselves and they are sitting on their keyboard commenting on everything you are doing while they do nothing and you have got to feel sorry for them really.

An outgoing person, Danni ‑ who made her debut on A Place In The Sun in 2016 ‑ has had to develop a certain resilience after experiencing two life-changing events that triggered panic attacks and a two-year depression, which involved a stint in The Priory.

“I was at university and I had an accident and my face got smashed in when I came off a Bucking Bronco machine at the club I worked at and I was propelled face-first into a metal stage,” she recalls.

“You could see the bone of my nose in two places and my eyes swelled up and I couldn’t see for a month.

“Having also lost a very close friend, I literally couldn’t cope and I had to drop out of university and move back home to Perthshire in Scotland.

“I went from having such an outgoing and full life to feeling that it was all over and suddenly I was unable to walk out of the door without having a panic attack.

“I hit a really bad depression, I cut off my friends and I was taking a lot of medication from antidepressants, anti-anxiety pills to valium.

“I was living in London when it got to the stage where I thought to myself, ‘I really don’t want to be here anymore’, and I was admitted to the rehab clinic The Priory.

“I was very depressed and very low but in the weeks that I was there, I met some amazing people and I learnt a lot about mental health and myself.

“It was there that I learnt to conquer my negative thoughts. Something just clicked in my mindset and I was up for giving things a try. I had NLP therapy [involving shutting out negative thoughts] which really did help me to come out the other side.

“It definitely gave me that feeling of having no fear and if that hadn’t happened, I don’t think I would have chased my presenting dreams.

“Unfortunately they didn’t do a great job on my nose and I had a blue mark on it for three years. I was told it was bruising but, when I went to have it redone privately, they pulled a tiny shard of metal out of my nose. It certainly doesn’t look as good as it did before.”

Despite this, Danni has learnt to cope with her insecurities and anxiety.

“I have been off my medication for about eight years and I’m fine now because I have found various coping mechanisms,” she explains.

“If I am travelling, I don’t drink much coffee because too much can set my heart racing and I feel panicky.

“I also follow the Emotional Freedom Technique (EFT) which has been good. Tapping certain points on your face, head and body can create a balance in your energy system and treat anxiety and I find it really helps along with breathing exercises and listening to a 10-minute meditation programme on my phone app.”

It’s hard to believe Danni is currently single but she insists that she is happy to be so, especially after recently reuniting with an ex-boyfriend of hers.

Tonight she can be seen on MTV dating show Celebrity Ex In The City, where she joins the likes of Love Island’s Jack Fincham and Towie’s Demi Sims, on a blind date ‑ interrupted by an ex-boyfriend ‑ and she has to choose between the two men.

It is not an experience she is in a rush to repeat.

“It’s not something I will be in a hurry to seek out,” she confesses. “It was awkward being confronted by my ex although he actually dealt with it very well and I was more awkward than he was.

“He is a guy I met on holiday and we dated in the first lockdown for eight months but he was much younger ‑ about nine years in fact ‑ than me.

“Until we filmed the show, we hadn’t spoken again and I’ve dated about three people since then but I haven’t spoken about it.

“But I am relieved it was him because we never ended on bad terms. It could have been worse.

I could have been linked with my ex Simon, who was in the military, but we don’t speak anymore.”

Danni reveals how she is open to having a relationship but having specific tastes is not always the most conducive finding a life partner.

“I am quite picky and bossy so it is hard to meet someone,” she chuckles. “I am a hard worker and I am also 5ft 10 ‑ and that’s without heels ‑ so they have to be 6ft 4in at least.

“But it is important to me to have a good sense of humour and be with someone who doesn’t take themselves too seriously. “Ultimately, I really want to get married and have a partner in crime. I have got some friends who have sat and dreamt about children but I have not thought about it too much. I know my clock is ticking but I don’t have that urge, if that makes sense.

“I am a passionate animal lover and I am more likely to adopt a few donkeys and have my rescue dogs than to have a baby. I love nothing more than being with my dogs, going for walks and the fresh air.

“I spent most of my childhood building treehouses and rescuing any random animals that I could find.”

For now, Danni is too busy to settle down. As well as filming more episodes abroad for A Place In The Sun, she is also hosting a virtual Christmas carol concert for the homeless charity Shelter and will be joined by other celebrities including Edith Bowman, Matt Allwright and DJ Vick Hope.

Streamed via its website and YouTube channel and filmed at St Martin-in-the-Fields Church, the aim is to bring the nation together to show their support for people facing homelessness this winter.

It’s a far cry from the jet-set locations that she goes to as part of her job but Danni says it keeps her grounded and is a cause really close to heart.

Coming from a property background, she knows only too well how important it is to have a roof over your head.

Any donations made will support Shelter’s frontline services and campaigning work to fight the devastating impact of the housing emergency.

The event sponsors, Nationwide Building Society, will match fund donations up to £50,000 on the night ‑ so every donation goes even further.

“I am so passionate about the homeless and I have worked at the soup kitchen for the last four years and I’ve got so much from it and I kept going back and that’s how I became aware of Shelter,” says Danni.

“I have worked with a lot of people throughout the kitchen and they don’t need to be on the street.

“I met this 85-year-old woman and she had no heating and mould up the walls and that’s where Shelter came in to help look for better accommodation.

“I like to think that I have got a good balance between A Place In The Sun and being involved with a charity.

“When I got the job six years ago, my shows were really bad because I was trying to be someone else. Now I know it’s okay to be myself and I’m into my stride, I feel like it’s a breeze…”

This year’s One Voice concert in the church of St Martin-in-the-Fields, where Shelter was founded in 1966, is available tonight at 7pm via england.shelter.org.uk