Ricky Gervais is speaking out amid the Golden Globes scandal.

The 59-year-old comedian has become all-but-synonymous with the annual award show, which honors the best in film and television each year, having hosted a record five times.

The Hollywood Foreign Press Association (HFPA), the organization behind the Globes, has been under fire recently after it was revealed that the overly-exclusive group lacked a single Black member, and faced accusations of somewhat unprofessional behaviors and accepting gifts from competing productions.

The fallout has been intense and swift, with many industry figures condemning the organization, which recently revealed their plan to combat the systemic issues, though they have largely been deemed as inadequate.

On Monday, it was announced that NBC will not air the Globes as they do each year, claiming that the HFPA still has work to do, but hopefully can return to the air in 2023.

Nixing the broadcast will leave NBC with a multi-hour hole in its programming early next year, which one Twitter user had an idea to fill in part.

“Instead of golden globes 2022 can we do a 1-hour @rickygervais special roasting the Hollywood elite,” the social media user wrote online.

In 2020, Gervais’ opening monologue at the Globes became well-known for his brutal comments about the Hollywood elite, joking that they’d work with nearly any organization to produce content, even ISIS should they start a streaming service.

He also poked fun at the Jeffrey Epstein scandal, stating that many in the room were likely friends with the late disgraced financier, and even brought up the Catholic church’s molestation scandal in a joke about Netflix’s “The Two Popes.” 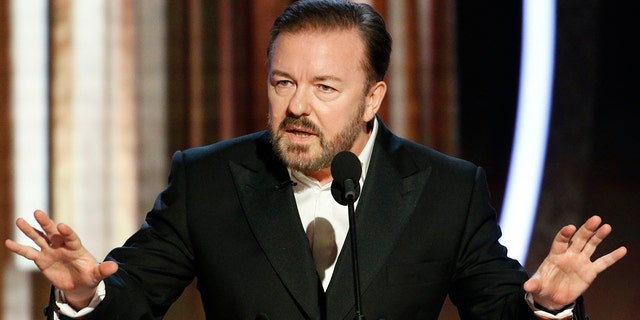 Ricky Gervais has become known for his stinging commentary on his fellow Hollywood figures. (Paul Drinkwater/NBC via AP, File)

“You all look lovely all dolled up, you came here in your limos. I came here in a limo and the license plate was made by Felicity Huffman,” he said at the time in reference to the “Desperate Housewives” actress’ jail sentence for her involvement with the college admissions scandal. “It’s her daughter I feel sorry for. That must be the most embarrassing thing that ever happened to her. And her dad was in ‘Wild Hogs,’ so…”

He also took a shot at Leonardo DiCaprio for his film “Once Upon a Time in Hollywood” being three hours long.

“Leonardo DiCaprio attended the premiere and, by the end, his date was too old for him.”

In a statement on Monday, the Hollywood Foreign Press Association didn’t address the 2022 telecast in responding to NBC’s decision, but board members of the group laid out its schedule of reforms — ultimately leading to a revamped membership and board by early August, as well as numerous other policy changes.

“Regardless of the next air date of the Golden Globes, implementing transformational changes as quickly – and as thoughtfully – as possible remains the top priority for our organization,” the group said in a statement. “We invite our partners in the industry to the table to work with us on the systemic reform that is long overdue, both in our organization as well as within the industry at large.”

On Thursday, the HFPA voted to make a handful of changes to the organization, including bringing in a Chief Diversity, Equity and Inclusion Officer, as well as new members, presumably with a focus on diversity.

Gervais:, issues, NSFW, resp, Ricky
You may also like: