The ‘I Like’ raptress, who is known for her past relationship with DDG, has been facing heavy criticism on social media after seemingly hinting that her type is ‘white or Asian guy.’

AceShowbiz –Rubi Rose has opened up more about her past relationship to her fans. The “I Like” raptress detailed her dating history on social media after she was heavily mocked for asking why white men won’t flirt with her.

Taking to her Twitter account on Friday, August 5, the 24-year-old hip-hop artist tweeted, “I was on a date with a black guy, and he told me I was the first black girl he’d ever been with.” She further told her followers that it was “our last date.”

Her Twitter post came a few hours after she wrote, “Why don’t white or Asian guys ever flirt with me.” Shortly after tweeting this, the “For The Streets” artist was heavily criticized by social media critics, with many urging her to delete her post. 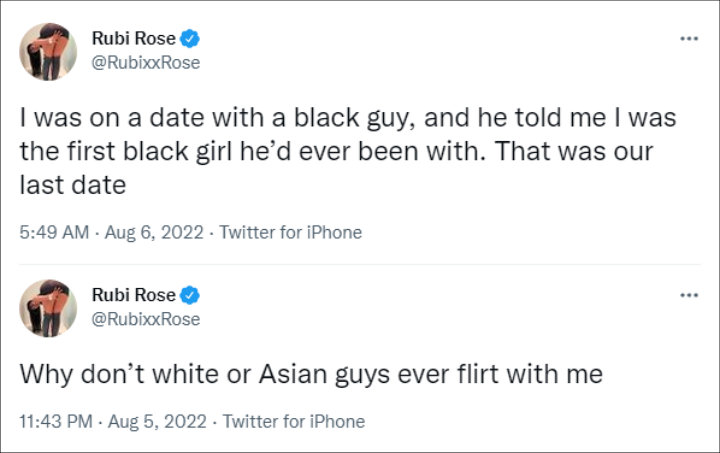 Rubi Rose detailed her dating story after she was blasted for asking why white men won’t flirt with her.

“Please delete before shea butter twitter finds you and starts a month long discourse,” one person replied to her tweet, while another remarked, “You’re too pretty for this. Stand up!!!!!!!!!!” A third pointed out, “When people say ‘things are best left unsaid.’ “

A different person commented, “She got that Doja Cat spirit in her lol.” Someone else chimed in, “Did she just said ‘I’m tired of getting attention from black guys only. They are not even my type’ ?,” with another adding, “This the b***h y’all be thirsting over??? She don’t want y’all black a****** LMAOOOOOOOOOOOO.”

When it comes to relationships, Rubi, who is known for her past relationship with DDG, stressed that she doesn’t want to date rappers again. When asked by “99JAMZ” host Supa Cindy an interview aired last August if she’ll date another rapper, Rubi responded, “I wanna say no, ’cause mostly like rappers and n***as in this industry are just habitual cheaters.”

However, Rubi noted that it might be hard to really do so. “It’s like, it’s hard to meet people outside of this industry because I don’t be out… Other people don’t understand the lifestyle,” she reasoned.