Joe Concha reacts to the ‘internal investigation’ at CBS into Osbourne’s comments.

Sharon Osbourne appeared on “Real Time with Bill Maher” on Friday night and addressed her controversial departure from the CBS daytime talk show “The Talk.”

Bill Maher kicked off the interview by asking how Osbourne was doing since she was last seen on TV.

“I’m angry, I’m hurt,” she responded, among other remarks, but stressed, “I’m a fighter.”

On the subject of what led to Osbourne’s ousting from “The Talk,” Maher told the former co-host, “I don’t think anything happened.” He then recapped the ordeal, which involved Osbourne defending her friend Piers Morgan, who similarly left “Good Morning Britain” over his critical remarks about Meghan Markle following the Oprah Winfrey interview.

“You got it right,” Osbourne responded. “That’s exactly how it went.”

“Who is the racist and why? And this is what I’m trying to figure out,” Maher said.

“Me too, me too,” Osbourne replied. “I’ve been called so many things in my life. I am so used to being called names — but a ‘racist’ I will not take.”

“I’ve been called so many things in my life. I am so used to being called names — but a ‘racist’ I will not take.” 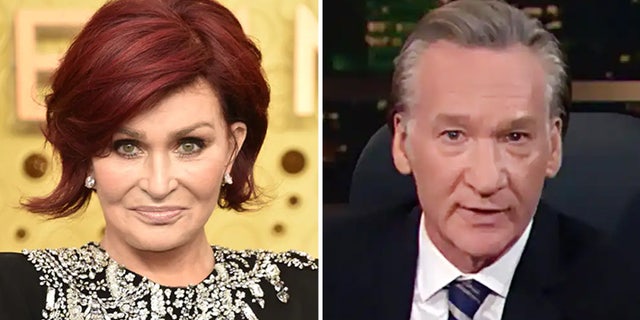 Maher then questioned whether one was deemed a “racist” if they didn’t believe “everything” that Markle said, a notion he called “insane.”

Osbourne explained to Maher the “woke language” she was told, in which the Dutchess of Sussex was “entitled to her feelings” and that Markle had allegedly been “stripped of those” by Morgan.

Maher then insisted that the Royal Family was “cold” to Markle and that racism could have “possibly” been a factor.

BILL MAHER CALLS PORTLAND A ‘CAUTIONARY TALE’: ‘IN A WORLD WITHOUT POLICE,’ IT’S ‘THE PURGE’ EVERY NIGHT

“The old bag’s a hundred,” Maher said of Queen Elizabeth II, who will turn 95 next Wednesday.

“She’s from a different generation,” Osbourne responded, defending the queen.

“They’re notoriously non-huggy,” Osbourne said. “I get it because of her age, she’s a different generation.”

MAHER SOUNDS ALARM ON ‘CLIMATE OF FEAR’ IN US SCHOOLS: PARENTS AFRAID OF ‘NOT BEING WOKE ENOUGH’

Maher then cited one of Osbourne’s former “Talk” colleagues, Elaine Welteroth, who said, “I think when you deny a woman or a woman of color their truth and their experiences, you’re not just denying them, you’re denying every woman and woman of color who sees themselves in this person’s story.”

“‘Deny a woman,’ he’s doubting her,’ Maher said of Morgan. “That’s not the same as denying.”

“All this drama over somebody saying, ‘I don’t agree with my friend but he’s entitled to his opinion,” Maher exclaimed. “I mean, I didn’t agree with everything she said. ‘Harry had the weight of the world on his shoulders.’ Really? He’s sixth in line for a job that has no responsibility, no power.”

“All this drama over somebody saying, ‘I don’t agree with my friend but he’s entitled to his opinion.'”

Osbourne went on to call Prince Harry the “poster boy” of ‘White privilege.”

“He sits there and says Daddy cut him off so he’s not on the wages anymore. And he was boo-hooing about it. You can’t feel empathy for that because you’re a healthy, bright, educated young man. You can go do whatever you want to do, your life is your own,” Osbourne said.