Simone Biles is bidding farewell to the Tokyo Olympic games. The celebrated gymnast shared a heartfelt post on Tuesday expressing how she feels as she returns home.

“Not at all how I imagined or dreamed my second Olympics would go but blessed to represent the USA,” Biles wrote, alongside a photo of a statue of the Olympic rings.

“I’ll forever cherish this unique Olympic experience,” she continued. “Thanks everyone for the endless love and support. I’m truly grateful.”

She also celebrated earning a silver medal as part of the team event and the Bronze medal she earned in the balance beam final. “Leaving Tokyo with two more Olympic medals to add to my collection isn’t too shabby! Seven-time Olympic medalist.”

Biles also shared a snapshot of her post to her Instagram story, and added, “Leaving Tokyo with a full heart.”

The 24-year-old gymnast won the bronze medal on Tuesday. The event marked Biles’ final opportunity to compete at this year’s games after she withdrew from four events due to mental health struggles that affected her ability to safely perform her routines.

Biles spoke with Today‘s Hoda Kotb after her final event, saying she was “very shocked” to have received the bronze medal.

“I feel like it’s still kind of a whirlwind. I don’t get to embrace it yet, but I’m just proud I could go out there and compete one more time before the Olympics was over and do a new beam dismount I haven’t done since I was probably 12,” she shared. 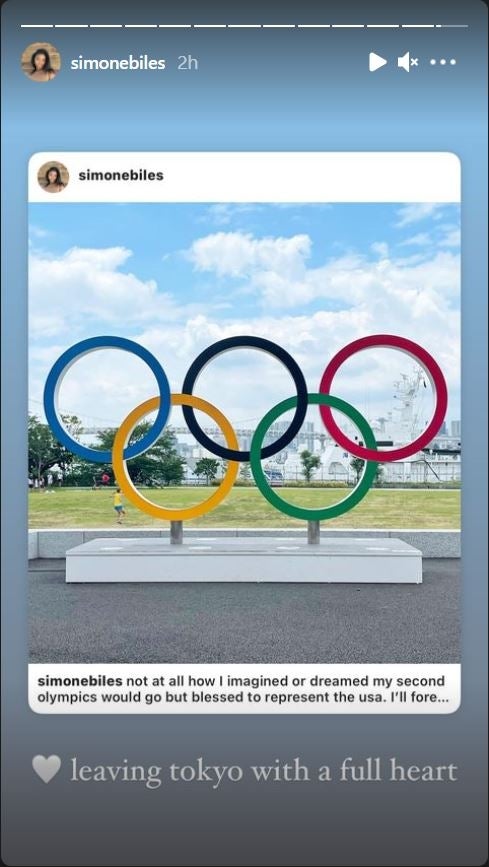 Biles now has a total of 32 Olympic and World Championship medals, including four gold medals.

“[This bronze] means more than all of the golds because I have pushed through so much the last five years and the last week while I’ve even been here,” Biles said. “It was very emotional, and I’m just proud of myself and all of these girls, as well.”