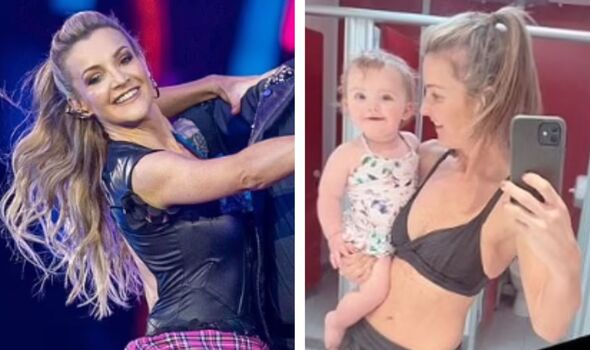 Helen Skelton has enjoyed some downtime from the fast-paced Strictly Come Dancing arena tour to take daughter Elsie swimming. She lovingly cradled the tot, who is just 13 months old, on her arm as she grinned broadly at the camera.

She was one of the show’s favourites last year, making it all the way to the final and narrowly missing out to Hamza Yassin on the coveted Glitterball trophy.

However, it was Helen who triumphed on the debut night of the Strictly live tour, after the audience voted her the winner.

The Countryfile star appeared with new dance partner Kai Widdrington, after her original partner, Gorka Marquez, was unable to take part, and was elated to be recognised.

The arena tour kicked off in Birmingham on January 20, and is set to continue until February 12.

Taking a break from the touring action, Helen held baby Elsie on her arm after changing into a barely there black two-piece swimsuit, and snapped a quick selfie.

She shared the photo on her Instagram Stories, affectionately branding her baby girl a “little fish” after she successfully got to grips with the pool.

Elsie is Helen’s only daughter and her youngest child, after giving birth to two sons – seven-year-old Ernie and five-year-old Louis.

Following the break-up with her kids’ dad, rugby ace Richie Myler, the 39-year-old has been inundated with support while she seemingly effortlessly balances parenthood and professional life.

She has also proved she’s still a huge hit on the dance floor, more than a month on from what fans described as her “revenge dance” following the split from Richie.

He left the marital home when Elsie – their third child together – was four months old.

Helen recently admitted she’s missing Gorka, whose praise played a part in helping her regain her confidence during the show last year.

“It’s really difficult not to be with [him] because we’re such good friends,” she admitted to The Sun.

“I’ve been asking him for advice a lot, so it feels like he’s here. I’d have loved for him to do it, but it’s almost like he’s in the group.”

During the heat of the competition last year, the one who Helen declared was her “wingman” gave her plenty of self-empowerment pep talks, including one particularly touching public one.

As the pair awaited their scores, he announced passionately: “Everyone believes in you.

“I know you’ve have been having a difficult time and… you may feel like you’re not beautiful or good enough or anything, but if you don’t believe in yourself, I believe in you.”

He added: “It doesn’t matter how many times I say it, or the judges say it, or anybody says it.

“It’s only you who is going to be the one who can make the change and the one who needs to believe in you, because you are an amazing woman, very inspirational.

“An amazing mum and incredible dancer, so believe in you, please!”

Hopefully Helen will have taken his praise to heart, as she continues to ace the Strictly tour.