The Real Reason Simone Biles Just Testified Against The FBI

The following article include mentions of sexual assault.

Back in January 2018, Simone Biles joined a long list of athletes who accused former USA Gymnastics team physician Larry Nassar of sexual assault. “I am not afraid to tell my story anymore,” Biles wrote in a heartfelt letter shared on Twitter. “I too am one of the many survivors that was sexually abused by Larry Nassar.” She continued, “Please believe me when I say it was a lot harder to first speak those words out loud than it is now to put them on paper. There are many reasons that I have been reluctant to share my story, but I know now it is not my fault.”

Fellow USA Gymnastics athletes Gabby Douglas, Aly Raisman, and McKayla Maroney also recalled being sexually abused by Nassar. Prior to such allegations, the former physician had already received a 60-years-long prison sentence for child pornography in 2017, serving his time at a Florida federal prison. Over the years, Nassar has been accused of sexual assault by at least 156 women, with incidents also taking place while he worked at Michigan State University.

In 2018, Nassar received another 175-year sentence for sexually abusing young athletes, and will be eligible for parole in 2117 (via ESPN). Though justice has somewhat been served, Biles and other athletes have now come after the FBI in regards to the Nassar case. Find out why below. 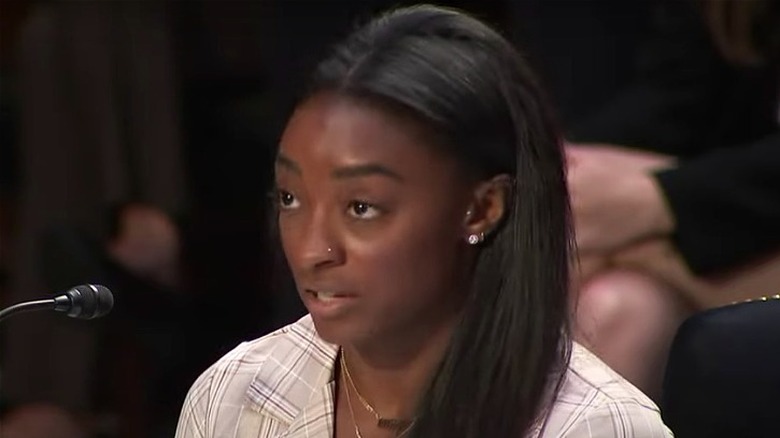 As reported by The Cut, the first recounts of sexual assault by Larry Nassar can be traced as far back as the late ’90s. However, Nassar was charged with criminal sexual conduct almost 20 years later, in 2016 (the same year he got fired from Michigan State University). For this reason, athletes Simone Biles, McKayla Maroney, Maggie Nichols, and Aly Raisman have now testified against the FBI, accusing the federal agency of turning a blind eye on Nassar’s misconduct.

On September 15, the USA Gymnastic stars sat before the U.S. Senate Judiciary Committee, during the first part of the hearing on the FBI’s mishandling of the Nassar investigation. “We suffered and continue to suffer, because no one at FBI, USA Gymnastics or the United States Olympic and Paralympic Committee did what was necessary to protect us,” an emotional Biles said (via CBS). “We have been failed and we deserve answers. Nasser is where he belongs, but those who enabled him deserve to be held accountable. If they are not, I am convinced that this will continue to happen to others across Olympic sports.”

She added, “To be clear, I blame Larry Nassar and I also blame an entire system that enabled and perpetrated his abuse.” Maroney shared similar sentiments. “What is the point of reporting abuse if our own FBI agents are going to take it upon themselves to bury that report in a drawer?” she added, per CBS News. “They had legal, legitimate evidence of child abuse, and did nothing.”

Biles:, J, Real, reason, Simone, the
You may also like: