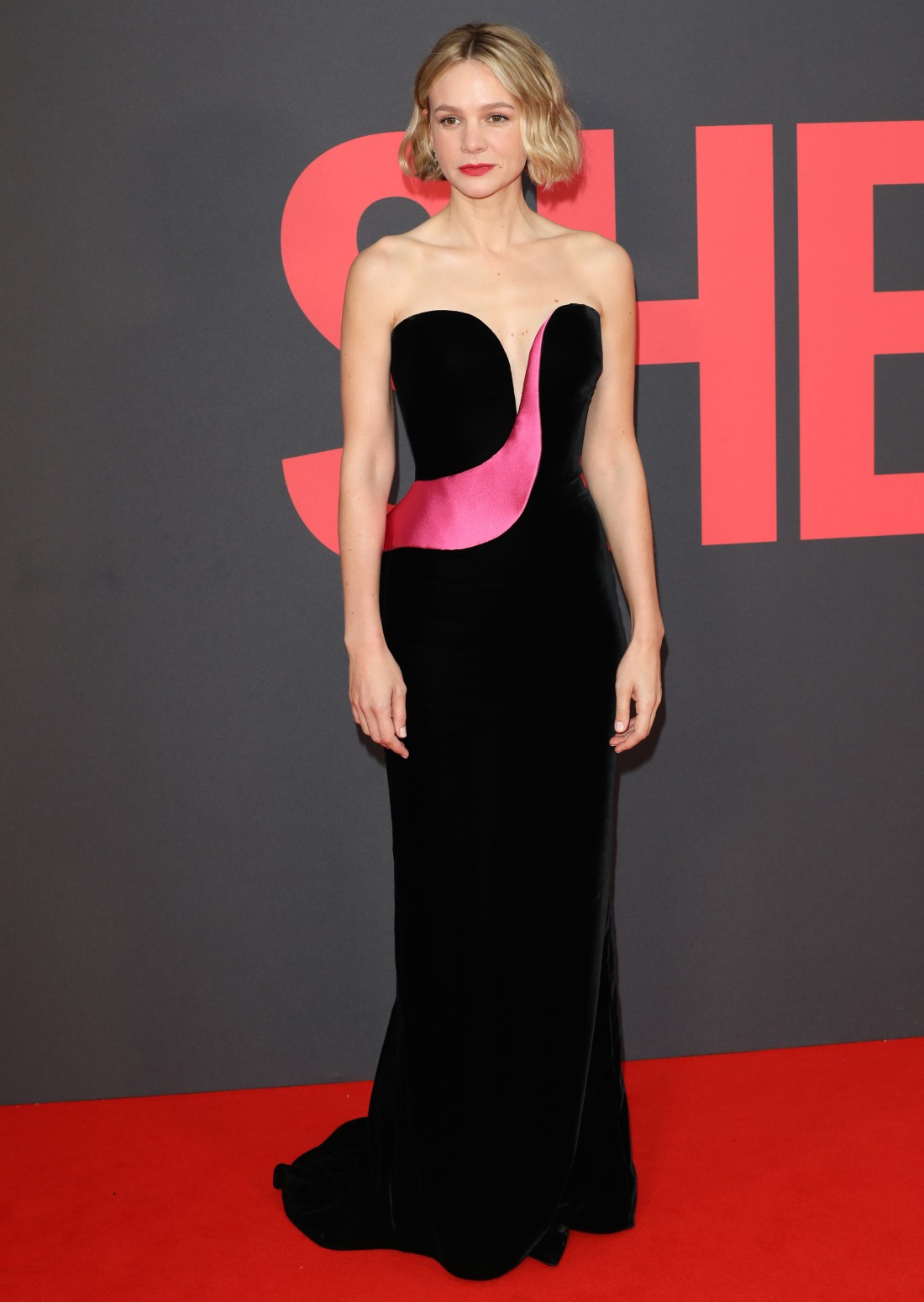 Last week, Carey Mulligan made appearances at the BFI London Film Festival and the New York Film Festival, all to promote She Said, the true story of Jodi Kantor and Megan Twohey’s work to expose Harvey Weinstein as a serial predator. Zoe Kazan plays Jodi Kantor, and Zoe went to the NYFF premiere, where people learned that she’s pregnant! She and Paul Dano are expecting their second child. One fashion note: Carey wore Armani to the London premiere! She looked stunning.

Anyway, I’m already going back and forth about how I want to write about She Said and what this Oscar campaign is going to look like. I mean, the film looks “good” in the sense that it’s about two dogged journalists breaking one of the most important Hollywood/women’s rights stories of the past 30 years. “Good” in the sense that both Kazan and Mulligan are talented actresses and they’ll both probably be up for awards. But there’s a specter at the banquet, which is that Plan B won the bidding war for the rights to the book, and Plan B produced the film. Plan B, meaning Brad Pitt. Brad Pitt who worked with Harvey Weinstein twice, even after Gwyneth Paltrow told him what Weinstein did to her. Even after Angelina Jolie told him what Weinstein did to her. Not only that, Pitt’s team tried to badger and shut down reporters who looked into the fact that Pitt worked with Weinstein too.

As I said, I’ve been thinking about all of this and how we should talk about it. It’s possible to simply recognize Kantor, Twohey, Mulligan and Kazan’s work and praise all of that as stand-alone achievements. It’s also possible we’ll have to talk about how Pitt’s involvement is already being whitewashed during the film’s promotion. As of this moment, Pitt is listed as one of the producers on the film. But in Deadline’s interview with Mulligan and Kazan, this is how they dealt with the issue:

Directed by Maria Schrader from Rebecca Lenkiewicz’s script, and produced by Plan B’s Dede Gardner and Jeremy Kleiner, She Said is adapted from Kantor and Twohey’s book of the same name. In the spirit of All the President’s Men and Spotlight, the film details the investigative reporting behind the story, from the initial whispers about Weinstein’s behavior through to its bombshell publication, as the pair uncovered truths that had lain buried for years while Weinstein wielded his outsized power.

Ah, the old “Brad Pitt doesn’t exist” trick. Brad who? Ol’ Whatshisname. Ah, the film is simply “produced by Plan B’s Dede Gardner and Jeremy Kleiner” and they don’t have a producing partner, of course not! I am exceedingly curious about this plays out over the awards season. I would imagine that Pitt will once again try to shut down stories about his own choice to work with Weinstein, even though he had a very good idea about Weinstein’s serial predation.

Kate Winslet's onto a winner… starring opposite her daughter

Sam Asghari Opens Up About Britney Spears' Absence From Events & Departure From Instagram!