Toby Keith and Ricky Skaggs received the National Medal of the Arts on Wednesday from President Donald Trump, around the same time he was being impeached for the second time by the House of Representatives.

The awards were presented by Trump during a closed press ceremony, The White House press office confirmed Thursday.

In the press release, the White House said Keith was selected “for making extraordinary contributions to American music. Rising from humble beginnings in the oil fields of Oklahoma, Toby Keith has become one of the preeminent songwriters of his generation.”

Skaggs was honored, the release said, “for his contributions to the American music industry.”

“A virtuoso of the mandolin and fiddle, Ricky Skaggs creates and produces bluegrass music that preserves the musical legacy of the most talented artists of his generation.” 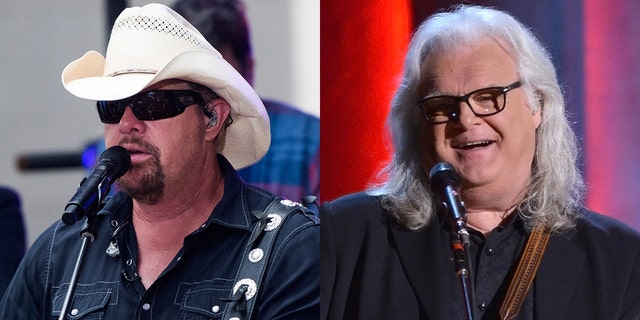 Toby Keith (L) and Ricky Skaggs (R) were slammed on Twitter for accepting medals from Trump during his second impeachment.
(Getty)

“Good to know. Toby Keith and Ricky Skaggs are now off my play list [sic]. The fact that they accepted this means they also accepted 1/6. They can just go sing to themselves in their showers,” said a user, referring to the Capitol riots that took place on Jan. 6.

“While we were busy impeaching Trump yesterday two country artists Toby Keith and Ricky Skaggs thought it was worthwhile to receive presidential medals from him. I would be ashamed to,” wrote another.

“If I were Ricky Skaggs and Toby Keith I would not accept the medals,” said someone else.

“Toby Keith and Ricky Skaggs have shamed themselves for all time! They are now a blight on Country Music!” echoed another.

The House voted 232-197 to impeach the president for “incitement of insurrection” after a mob of his supporters besieged the Capitol on Jan. 6 in a failed attempt to stop the certification of President-elect Joe Biden’s Electoral College win.

Trump is the only U.S. president to be twice impeached. He was first impeached by the House in 2019 over his dealings with Ukraine, but the Senate voted in 2020 to acquit.

And, Keith, Ricky, Skaggs’, sl, Toby
You may also like:

Jungkook Is the 'Golden Maknae,' but Who Is Considered BTS' Golden Hyung?'