Who needs Will Ferrell? This show is a real cracker: VERONICA LEE reviews Elf The Musical

The Wizard Of Oz (Curve, Leicester)

The 2003 film Elf is an established seasonal favourite and, inevitably, audiences will have Will Ferrell lodged in their heads when they think of Santa’s hapless ‘little’ helper Buddy.

Thankfully, Simon Lipkin in Elf The Musical overcomes any comparisons (and a dreadful wig) to make a convincing lead.

The story, should you need reminding, is about the naive Buddy, who at the age of 30 discovers he’s not an elf at all, but a large human who, as a baby, crawled into Santa’s sack and was then brought up by his elves at the North Pole.

Buddy goes to New York to find his father, frazzled businessman Walter Hobbs (Tom Chambers), who is too busy for his wife, Emily (Rebecca Lock), and son Michael, let alone for this weird manboy who wants to hug him all the time. 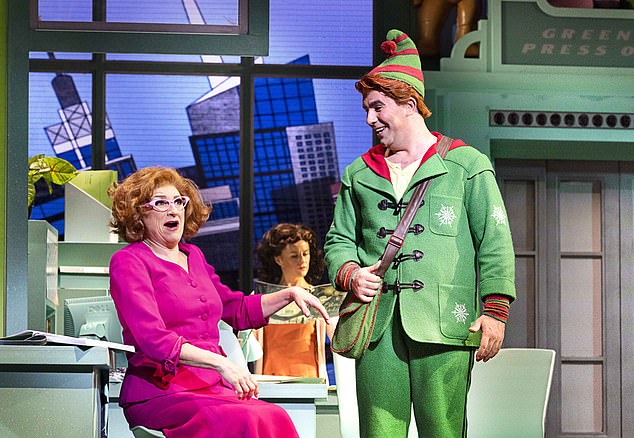 The 2003 film Elf is an established seasonal favourite and, inevitably, audiences will have Will Ferrell lodged in their heads when they think of Santa’s hapless ‘little’ helper Buddy

To make matters worse, Hobbs is on the Naughty List because — oh, the horror — he doesn’t believe Santa exists.

Philip McKinley’s classy revival — the scenes in Macy’s look particularly gorgeous in Tim Goodchild’s design — has some rousing song-and-dance numbers (the book is by Thomas Meehan and Bob Martin, with songs by Matthew Sklar and Chad Beguelin, choreography by Liam Steel).

If you can’t get to the West End Christmas Carols, check out Mark Gatiss as Jacob Marley in his own stage adaptation of Dickens’s festive yarn, which stars Nicholas Farrell as Scrooge.

In cinemas on Sunday and Thursday (christmascarolcinema.com)

Lock and Logan Clark as Michael (the night I saw the show) perform one of the evening’s showstoppers in There Is A Santa Claus, while Kim Ismay as Hobbs’s assistant Deb and Dermot Canavan as the store manager provide great comedy.

There are a couple of lulls and some of the gags are for adults only — have fun on the way home explaining to your wee ones how Buddy’s ‘special hug, twice!’ for Jovie (Georgina Castle) resulted in a little Buddy — but the message that we all need to believe in the true meaning of Christmas shines through.

Under the artistic director Nikolai Foster, the Curve Theatre in Leicester has become a musical theatre powerhouse, and his sumptuous new production of The Wizard Of Oz cements that status.

The show incorporates music from the 1939 MGM film, with additional songs by Andrew Lloyd Webber and Tim Rice from Lloyd Webber and Jeremy Sams’ 2011 version, and it’s a visual as well as a musical feast, with its clever set design by Colin Richmond and lavish costumes by Rachael Canning.

As we leave the drab tones of Kansas, everything on stage suddenly moves into startling colour and neon sets, and impressive back projections fill in parts of the narrative. Georgina Onuorah makes a powerful lead as a nicely brattish Dorothy — ‘Nobody listens to me!’ — while Jonny Fines (Scarecrow), Paul French (Tin Man) and Giovanni Spano (Lion) are her amiable companions as she tries to find her way home in her fever dream. A delightful puppet Toto (operated by Ben Thompson) threatens to steal the show. 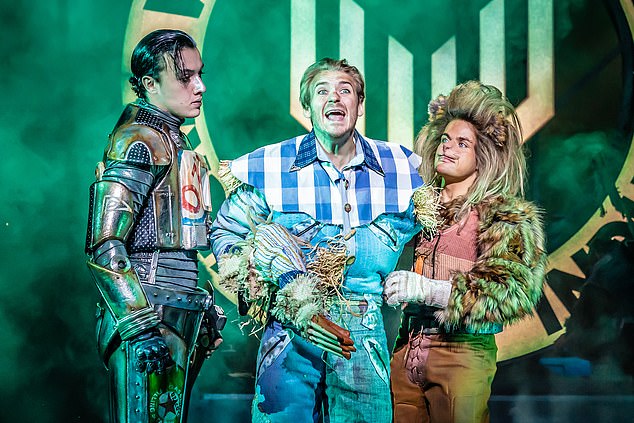 Paul French, Jonny Fines and Giovanni Spano in The Wizard Of Oz. Under the artistic director Nikolai Foster, the Curve Theatre in Leicester has become a musical theatre powerhouse, and his sumptuous new production of The Wizard Of Oz cements that status

Dorothy is thwarted at every turn of the Yellow Brick Road by the Wicked Witch of the West, who, Imelda Marcos-like, must have those sparkly red shoes for herself — even if it means killing Dorothy.

The Wicked Witch (on the night I saw the show, played brilliantly by understudy Ellie Mitchell, replacing the indisposed Charlotte Jaconelli) is, well, suitably wicked, while Christine Bianco as Glinda is a vision of loveliness in pink. Her duet with Dorothy, Already Home, is a real tearjerker.

The back projection during the overture showing newspaper headlines and the strong Nazi vibes at the Wicked Witch’s castle remind us that L. Frank Baum’s allegorical tale is set in Depression-Era America and the lead-up to World War II.

But Mr Foster pulls off the neat trick of satisfying those who need a show to have a political or moral message, as well as those who just want to enjoy two hours of feelgood theatre with lots of nice tunes.

Verdict: Dickensian feast for the eyes

Verdict: Not sure about this, Sherlock

‘Marley was dead!’ It’s six Christmases since the old financier’s ghost first dragged his rattling chain the full length of the Old Vic to warn his partner. This version is now an established sight of London.

2022’s Scrooge is Owen Teale from Game Of Thrones and my favourite so far: fabulous whiskers, properly gruff, convincingly furious as he resists the nagging female ghosts. Only late on does he realise that he is not only a ‘squeezing, wrenching, grasping, scraping, clutching, covetous old sinner’ but has wasted his own chances of happiness.

That modern self-pity is part of Jack Thorne’s adaptation: while he wisely uses Dickens’s prose in narration he adds therapy-couch explanations about Scrooge’s cruel father and his lost love. 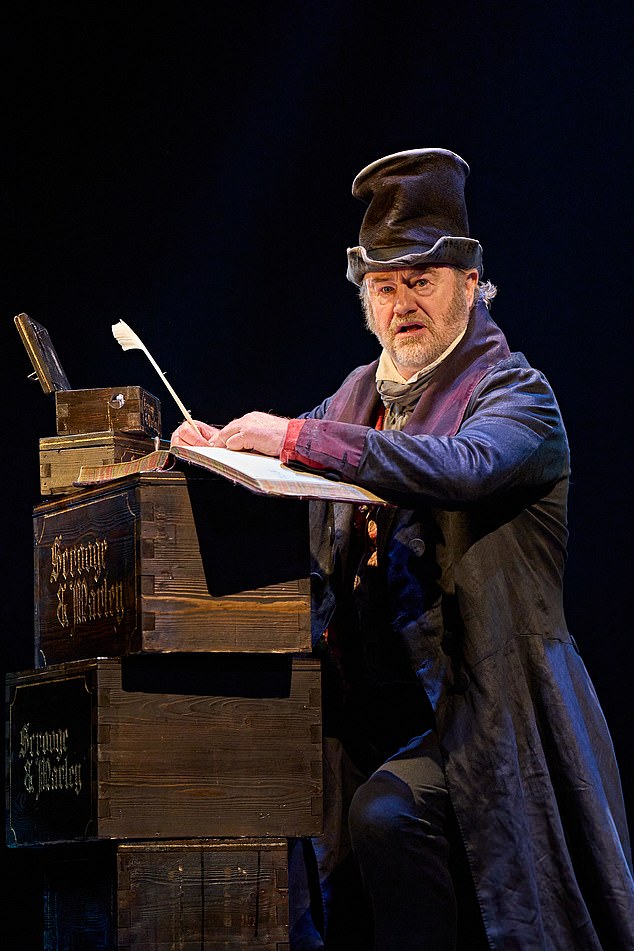 There are words like ‘manipulative’ and ‘you’re part of my story’, and a swipe at the disaster-TV age when he cringes from the ghost showing him a dying Tiny Tim — ‘is it wrong not to want to see that?’ But it is still a glorious Victorian-Dickensian spectacle: mince pies as you enter, oranges thrown to the gallery, handbells, lanterns, rattling strong-boxes rising from the floor, carols. And an insane Christmas dinner avalanche from the roof, with parachuting sprouts and a finale with Marley’s ghost in tap shoes.

Three miles north across Dickens’s city, beyond 221B Baker Street, the Marylebone Theatre has Mark Shanahan’s A Sherlock Carol, cheekily opening with the words: ‘Moriarty was dead.’

It’s 40 years on and a depressed Holmes is visited by Dr Cratchit: Tiny Tim grown up and earnestly curing other children. Scrooge has been murdered after some shenanigans with a lost will and the precious Blue Carbuncle, which may or may not have been stolen by a descendant of Scrooge’s old employer Fezziwig.

It’s a brilliant mash-up, echoing lines from both books. Holmes doesn’t believe in spirits but on Christmas Eve, Scrooge’s ghost mockingly quotes him: ‘If you eliminate the impossible, whatever remains, however improbable, must be the truth.’

I wanted to adore it — and it is only two hours (a big plus in my books) — but the first half is fussy with subplots and awful comedy accents your children may love but I didn’t.

And though Kammy Darweish is a gorgeous Scrooge, Ben Caplan’s detective needs to dial it up a bit in the first half to find the Sherlock magnetism. I know he had a hard time at the Reichenbach Falls, but that’s no excuse to be so mopey.