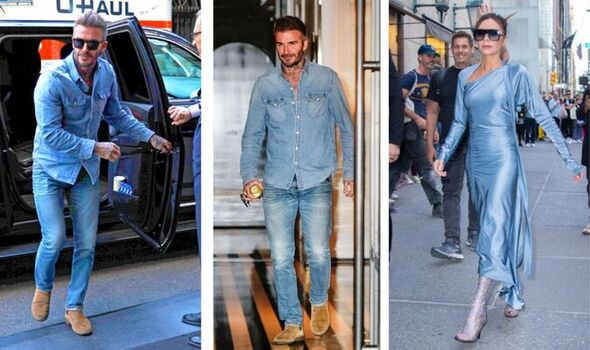 Victoria and David Beckham both wowed in blue during their trip to NYC, just days after the globe-trotting couple left Paris.

Style entrepreneur Victoria looked every inch fashion royalty in her stand-out blue metallic dress, which trailed down beside her ankles as she arrived at Bergdorf Goodman during her solo shopping trip.

She channeled Cinderella with her glittery transparent boots – aptly, as she and her holiday-loving husband certainly seem to be living the fairytale together.

Back in the days when Victoria still called herself Posh Spice, she and David had worn the denim-clad look together, perhaps in a nod to showbiz couple of the era Britney Spears and Justin Timberlake, who gained attention for their own coordinating denim outfits.

Victoria Beckham channeled Cinderella as she stepped out without David

Victoria Beckham donned a baby blue dress the same shade as Cinderella’s, while her glittery transparent perspex boots gave the impression she was modelling a tall version of the glass slipper.

David wasn’t present when Victoria Beckham, who has recently launched a collection at Paris Fashion Week, headed to the shops for a spot of retail therapy.

The pair had previously both sampled the style, although these days Victoria is more often partial to PVC, with her trademark patent leggings and matching Louboutin heels being a regular fixture on her Instagram account.

Victoria Beckham, pictured here with ‘Baby Spice’ Emma Bunton, was partial to a denim coord in her earlier days.

The celebrity couple made this controversial love-it-or-hate-it all-denim style one of the most talked about of the 2000s.

Although David may have rocked his double denim look while travelling solo yesterday, he and Victoria made a public appearance together with an equally eye-catching look the previous day.