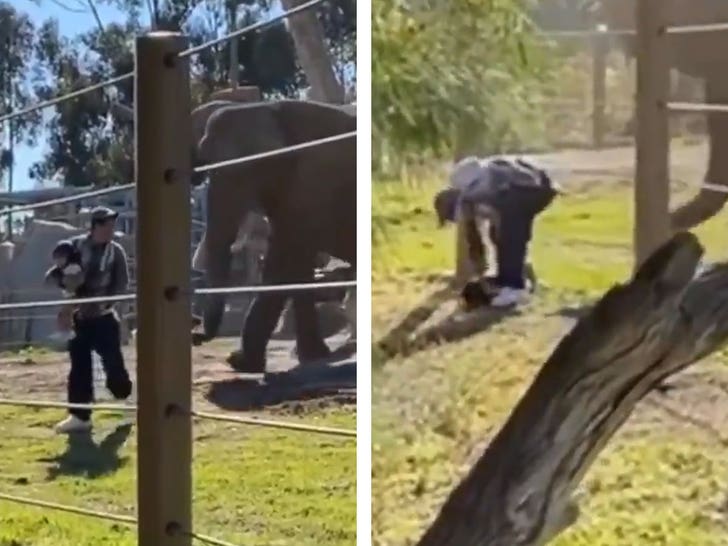 This guy definitely ain’t winning Dad of the Year — a man brought his 2-year-old INSIDE a caged elephant habitat at the San Diego Zoo… and fumbled the kid trying to make a run for it.

Check out this absolutely wild video of a father entering an enclosure that houses one of San Diego Zoo’s African elephants, Shaba. The footage picks up with him already on dangerous ground with his toddler daughter in hand … as shocked spectators look on.

He has his back turned to the elephant — which is idiotic — and before you know … the beast is charging at him and his baby. Luckily, he notices in time and scrambles to get out — but he almost forgets one important thing before fully exiting the area … his damn kid!!!

Watch … he actually drops the child on the ground, face-first, and it’s left incredibly close to the elephant’s feet — which easily coulda crushed her. The dad picks up the baby in time, and makes a not-so-clean escape. All the while, the agitated elephant is roaring.

Now, if you’re wondering if her pops — aka Jose Manuel Navarrete — had to pay a price for his stupid stunt … the answer is a resounding yes. He was arrested by San Diego PD and booked on child endangerment charges — Navarrete is being held on $100k bail.

As for Shaba … fortunately, this doesn’t appear to be another Harambe incident. The elephant is said to be fine, and doesn’t face any life-or-death punishment for protecting its turf.