It’s a battle of the yachts! Jennifer Lopez and on-again beau Ben Affleck have been making a splash as they galavant around St. Tropez, France, and Capri, Italy on their $130 million superyacht for the popstar’s 52nd birthday. But they aren’t the only ones sailing the French Riviera — Lopez’s ex-fiance Alex Rodriguez was also spotted in St. Tropez at the same time. On Rodriguez’s $32 million yacht is former NFL player Eric Decker and his wife, singer Jessie James Decker, per Daily Mail.

Fans around the world are closely watching the exes’ eerily similar birthday vacations. The Daily Mail spotted both yachts extremely close to one another in the St. Tropez harbor. The “On the Floor” singer was spotted lying on her stomach toward the bow of her yacht as her boyfriend puts his hand on her derriere, which many fans speculated to be a frame-for-frame recreation of the singer’s “Jenny From the Block” video.

Rodriguez was spotted zooming around his ex’s superyacht on a jet ski with blonde sports broadcaster Melanie Collins, 35, who is a guest on the former MLB player’s $312,000-a-week yacht. So, what is really going on with these two? Read on to find out.

Melanie Collins has an impressive resume 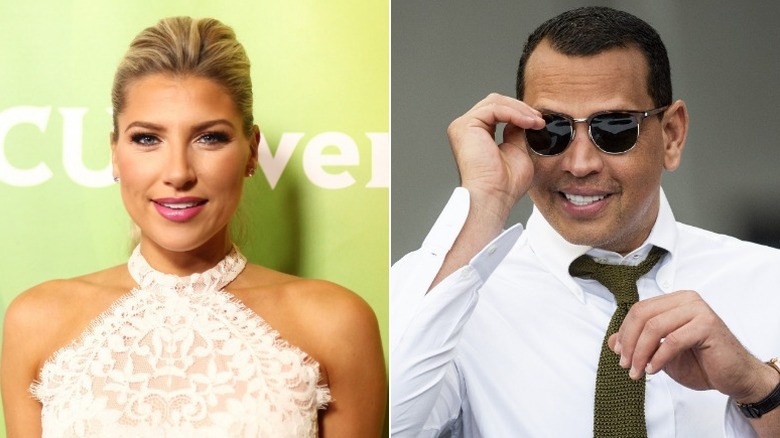 Fans immediately speculated that Alex Rodriguez and sports broadcaster Melanie Collins were having a romantic fling, but an insider shot down the rumors. “Alex has been hanging with friends and family on the trip, including Eric and Jessie James Decker. Melanie is good friends with them,” the source told Page Six. “They’re all friends and she’ll be at his party.” Rodriguez is expected to have about 50 guests at his 46th birthday bash, FYI.

As for Collins’ background, she is an NFL sideline reporter for CBS Sports and also works for the Golf Channel as a host for “Big Break” and “Driver vs. Driver.” The Penn State alum also fills in as a host when needed on Sports Nation on ESPN, and has hosted and reported for many impressive networks and leagues including NBC Sports, NASCAR, PGA, E! News, and Good Morning America. Collins — who is based in Nashville — also covered major events such as FIFA World Cup, Super Bowl, NBA Finals, and the Winter Olympics.

So, how did Collins get into reporting? She was bartending in college when a friend suggested she try out reporting for AccuWeather. “I had always been told to get any kind of experience in front of a camera that you can,” she told Onward State in 2014. And now that she has plenty of experience, maybe she’ll land her ultimate goal. “I’d love to have my own hockey show,” she gushed. Sounds like the sky is the limit for Collins!

ALEX, is, New, Rodriguez's, Ru, Who
You may also like: