YouTube Enjoyed Most 'Significant Growth' Among Tech Giants During Pandemic

YouTube Edged Out Other Tech Giants With Biggest Gains During Pandemic

Facebook’s growth has leveled off over the last five years, according to new survey results from Pew Research Center

YouTube was the tech platform that enjoyed the most “significant growth” during the pandemic, according to a new survey from Pew Research Center on Wednesday, as the Google-owned video giant — like several streaming services over the last year — benefited from people remaining at home.

The key takeaway: 81% of Americans said they use YouTube on a regular basis, which is up from 73% in 2019, the last time Pew released similar findings. The only other tech platform with comparable growth was Reddit, whose usage grew from 11% of Americans to 18% between 2019 and 2021. (Pew looked at several other major apps and websites in the survey, including Snapchat, Instagram, Twitter and LinkedIn.)

“YouTube is the most commonly used online platform asked about in this survey, and there’s evidence that its reach is growing,” Pew announced after releasing its findings.

Still, it’s worth pointing out Facebook remains very popular among Americans overall, with 69% of respondents saying they use the service — second only to YouTube. That makes sense when you consider Facebook has continued to add domestic users over the last two years, despite already having a ton of users relative to its social media competitors. In Q1 2019, Facebook had 186 million daily users in the U.S. and Canada, and that figure jumped to 195 million people by the end of 2020. For comparison, Twitter had 37 million daily users in the U.S. by the start of 2021.

“Facebook’s growth has leveled off over the last five years,” Pew said, “but it remains one of the most widely used social media sites among adults in the United States: 69% of adults today say they ever use the site, equaling the share who said this two years prior.”

Here’s a full look at Pew’s survey on the most commonly used tech platforms: 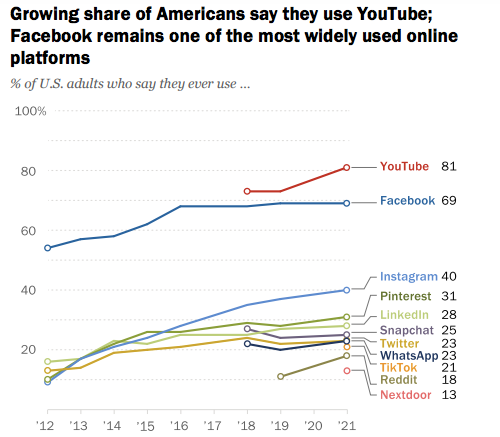 A few other quick notes:

Pew’s data is based on a survey of 1,502 American adults from January and February of this year; the margin for error was plus or minus 2.9%.

Brothers Osborne: The Country Duo Is Worth More Than You Think

TALK OF THE TOWN: Is Olivia still Wilde about young Harry Styles?

TALK OF THE TOWN: By George, what a bad time for an engagement