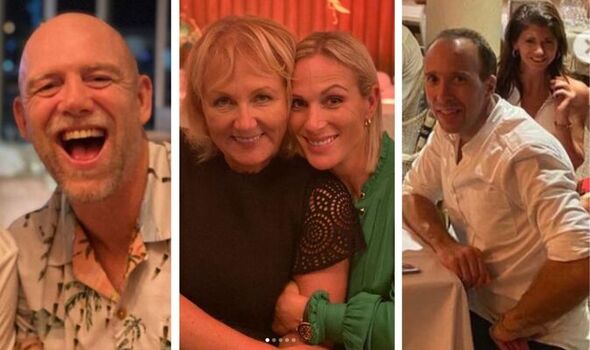 Coronation Street star Sue Cleaver was all smiles as she cuddled with Zara Tindall at the I’m A Celebrity wrap party – just days after sharing with the world that she’d formed a “close bond” with the royal’s husband on set.

Zara Tindall is former rugby ace Mike’s real wife – but as they battled for survival Down Under, Sue Cleaver became his honorary “jungle wife”.

After getting voted out, Sue confessed it had been Mike she had connected with on “the deepest level”.

Meanwhile, a heartbroken Mike claimed that losing Sue to eviction had felt like a “divorce”.

He had comforted her after she burst in tears due to homesickness, and lamented that he’d lost his “jungle wife” when she left.

However, Zara – the granddaughter of the late Queen – looked delighted to be meeting her husband’s closest I’m A Celebrity friend, as she wrapped her arms around her at the wrap party.

Sue Cleaver confessed to having a “sore head” after the night of celebrations, but posted her favourite pictures from the studded night out, leading Ryan Thomas – her former onscreen son in Coronation Street – to exclaim that she and Zara looked like “sisters”.

Controversial Matt Hancock was smiling happily in one of her pictures, despite he and Gina being notably absent from Charlene White’s upload from the I’m A Celebrity farewell feast. Charlene admitted following her exit that she’d refused to share an SUV with him because she is an “impartial journalist” who felt it would have been inappropriate – even if it meant shunning a comfortable place to stay.

Zara looked as though she could scarcely stand to be apart from Mike Tindall after his I’m A Celebrity absence – and the pair captured the emotions they had after reuniting during a loved-up reunion. Mike exclaimed: “I’ve missed you so much!” as he exited the show in the semi-final.

Mike Tindall also comforted Sue Cleaver in his role as camp leader, after she was reduced to tears over the stress and homesickness of her jungle experience. She exclaimed she had “hit a wall”, adding in an emotional outburst: “I don’t want to do a trial, I don’t want to do a challenge, I don’t want to eat the s***!” Yet Mike, who calmly comforted her, said her behaviour was to be “expected” due to the tough environment.

Mike Tindall larked about with multiple people in the jungle

Not only was he a valued source of support for Sue Cleaver, but he also developed strong friendships with Hollyoaks’ Owen Warner and comedian Seann Walsh.