Sarah Ferguson has called Princess Beatrice a ‘natural angel of kindness and goodness’ as she shared an intimate birthday portrait of the royal.

The Duchess of York, 60, posted an illustration of the Queen’s granddaughter on her Instagram page last night as the youngster celebrated her 32nd birthday.

Shared a snap of the painting online, Fergie thanked illustrator Claire Fletcher for the picture of Beatrice on her birthday, writing: ‘She is a natural angel of kindness and goodness, so this little painting sums it all up.’

Her comments come weeks after the princess, who is ninth-in-line to the throne, tied the knot to  Edoardo Mapelli Mozzi, at a secret ceremony at her parent’s home of the Royal Lodge in Windsor. 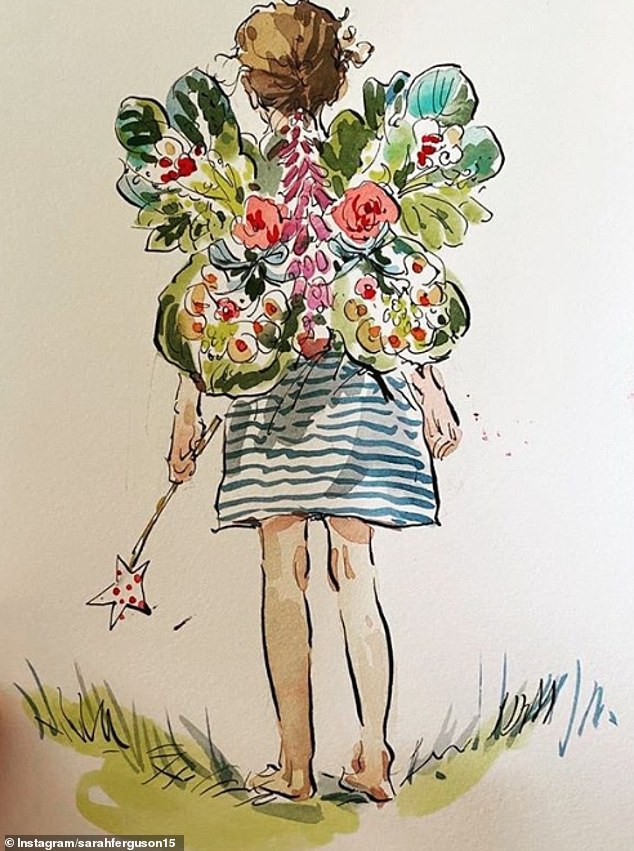 Sarah Ferguson, 61, called her daughter Princess Beatrice a ‘natural angel of kindness and goodness’ in a gushing Instagram post as she shared an illustration of the royal yesterday

In the painting, Princess Beatrice can be seen from behind as she walks barefoot through a field of grass.

Meanwhile the royal appears to have swept her auburn locks into a pony tail and wearing a large pair of colourful wings made of flowers.

While it is not known when the picture was painted, the outfit is remarkably similar to one worn by the royal on the eve of her wedding to Edo last month.

Sharing a snap of the illustration, Fergie wrote: ‘Thank you Claire Fletcher for your painting for Beatrice on her birthday.’ 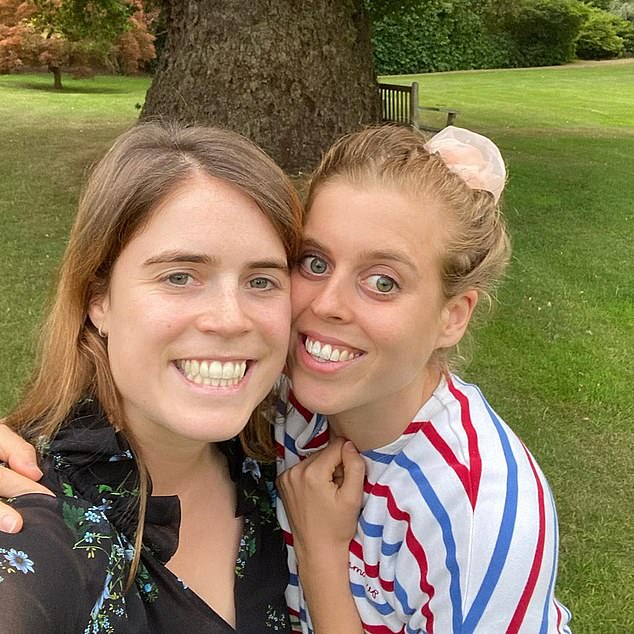 While it is unknown when the illustration was painted, the royal’s striped outfit is remarkably similar to one worn on the eve of her wedding last month (pictured, on her wedding evening with Princess Eugenie) 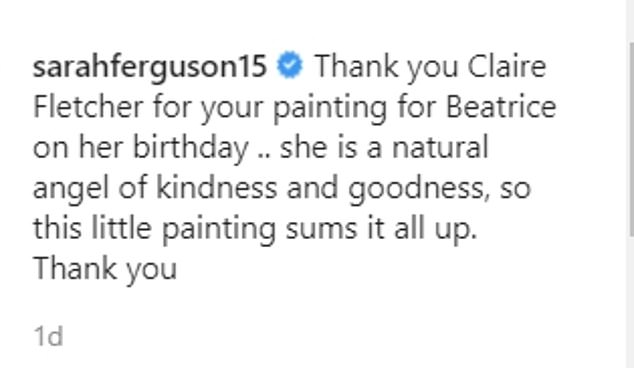 Sharing the illustration online, the Duchess of York wrote that the royal was ‘a natural angel of kindness’

Princess Beatrice’s celebration come just weeks after the princess, who is ninth-in-line for the throne, tied the knot to Edoardo Mapelli Mozzi, at the Royal Chapel of All Saints, in the grounds of Royal Lodge, in Windsor Great Park.

Beatrice married on Friday 17th July wearing both a tiara and vintage dress generously lent to her by her grandmother.

The wedding bridged three Royal generations – with Princess Beatrice becoming a stepmother to Edo’s son Wolfie, four, who acted as both best man and page boy alongside his two young cousins. 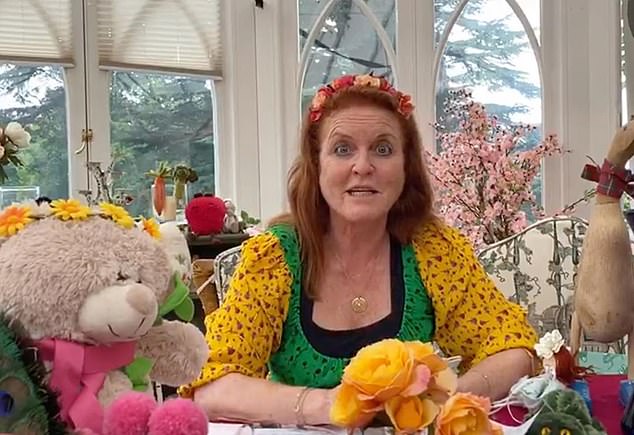 The Duchess shared the snapshot on her Instagram page as Princess Beatrice celebrated her 32nd birthday yesterday (pictured, the Duchess of York) 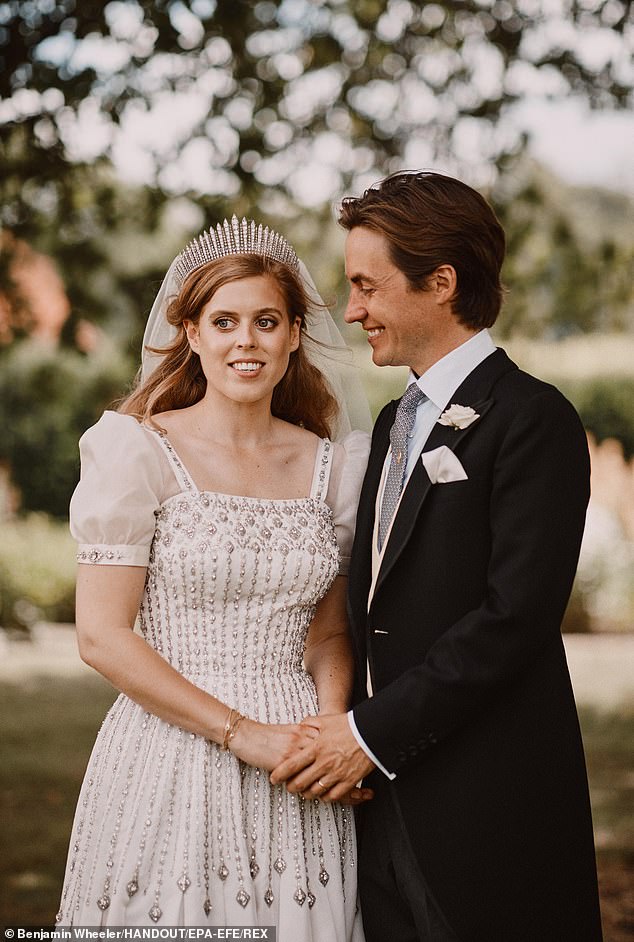 The celebrations come just weeks after the princess, who is ninth-in-line for the throne, tied the knot to Edoardo Mapelli Mozzi (pictured, together), at the Royal Chapel of All Saints, in the grounds of Royal Lodge, in Windsor Great Park

A small party was held afterwards at Royal Lodge, Prince Andrew and Sarah, Duchess of York’s Windsor home, with many of the 20 guests staying overnight – some in glamping pods outdoors.

The photographs were released the following day to ensure that they did not overshadow the ceremony to confer a knighthood on Captain Tom Moore, the former Army officer who raised £33 million for charity in a sponsored walk leading up to his 100th birthday in April.

The couple were later spotted by an eagle-eyed tourist as they drove ‘a small car absolutely packed to the roof with stuff’ in the south of France. 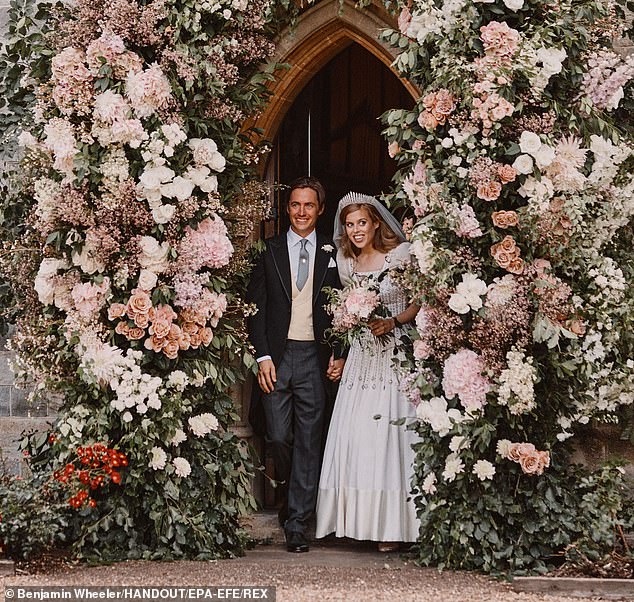 A source said Beatrice and Edo, 36, had planned to skip a traditional honeymoon, but decided at the last minute to take a trip across the Channel.

‘The wedding was arranged in a couple of weeks, and with lockdown their choice of honeymoon destinations was severely curtailed.

‘They weren’t going to bother but at the last minute they decided to pack up the car and head out. They’re a very down-to-earth couple.’

It is understood that they are planning a trip to Lamu Island, off Kenya, where Edo’s family own a home and where he took Beatrice in the early days of their romance.

The property developer fell for the Princess after meeting her at the wedding of her sister Princess Eugenie to Jack Brooksbank in October 2018.

Looking for air fryer Cyber Monday deals? We found the best for you

'Welcome to Plathville': Ethan Plath Admits That Marriage Is Much Harder Than He Anticipated

Body of Houston Influencer Missing Since Thanksgiving Argument is Found