The final episode of Netflix’s new hit reality dating show Love Is Blind just dropped on Thursday, and, unless you’ve been living under a rock (or worse, forgot your Netflix password), you know that the show features six couples who got engaged without ever seeing each other. In the season one finale, viewers will finally get to see which of the lovebirds make it through their wedding day, and which pairs…well, don’t.

As Love Is Blind season one comes to a close, fans will also get the answers to some of their most burning questions: Who was the runaway bride? Which couples actually said “I do”? Where do the couples stand now? And, most importantly, will Jessica stop feeding her dog wine? But one question the show doesn’t answer: Who the heck is paying for all these weddings?

To put all the financial questions and conspiracy theories to rest, the Women’s Health team got the inside scoop from a source close to Love Is Blind. Here’s everything you need to know about the cast’s dough as you finish the final episode.

Netflix pays for a portion of the Love Is Blind weddings…

Viewers and cast members have posted conflicting theories and evidence online about whether the Love Is Blind couples or the TV show pays for the weddings after contestant Amber Pike and her fiancé Barnett (a.k.a. Matt) discussed some financial difficulties while planning their nuptials.

A Reddit post further stirred the pot after the poster, who said they lived in Atlanta (where the show is filmed), speculated that the contestants pay for their entire weddings. 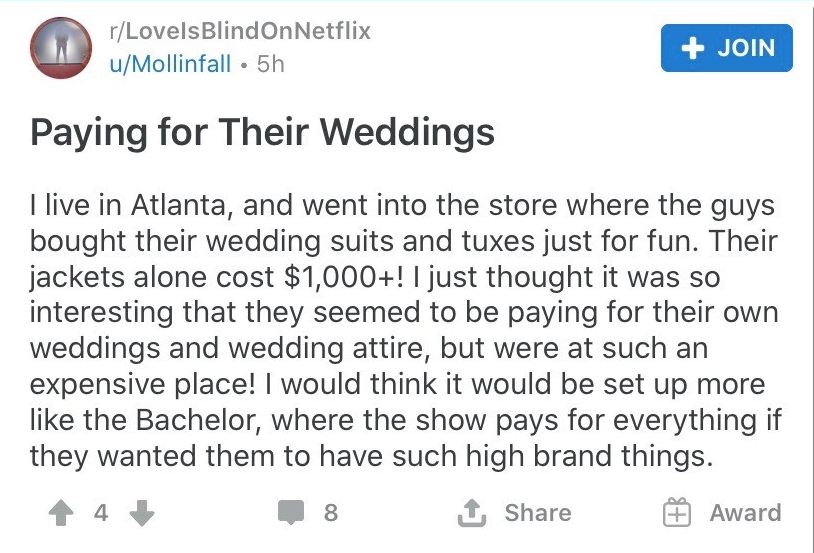 However, anInstagram comment posted by Amber denied that, stating that Netflix paid for the weddings entirely. “the weddings were 100% paid for by the show…” she responded to a fan. 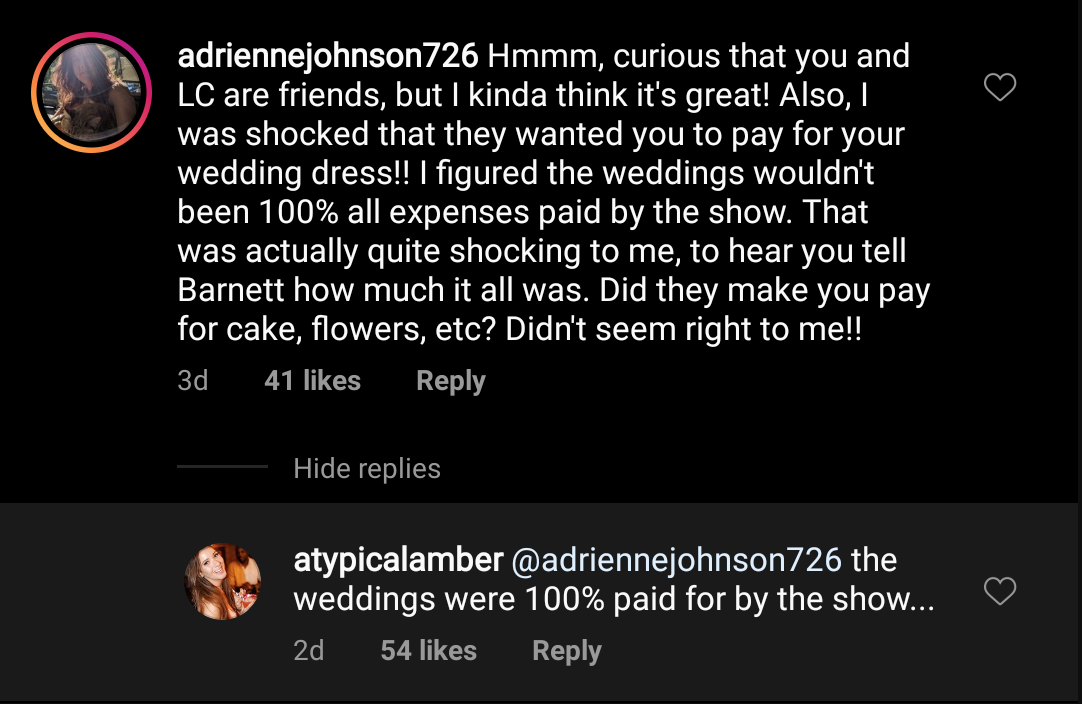 Her comment confused other fans who remembered the episode where she found out her dress alterations were $850. If Netflix paid for everything, why was Amber so worried?

But the total budget is ultimately up to each couple.

A production representative from Love Is Blind cleared that up in a statement to Women’s Health. “Of course production supplies some of the basics, but because these are their real weddings, it’s up to them as to how to spend their money,” the rep shared.

Netflix paying for the wedding up until a certain price point does connect the dots between what was shown on screen and Amber’s Instagram comment. Amber and Barnett were likely trying to stay under their budget (aren’t all engaged couples?), which may explain why she would have been concerned to see such a high alteration cost.

Now that fans know these new couples hopefully aren’t going into debt paying for their nuptials, there’s nothing left to do but stalk the cast on Instagram and wait patiently for the Love Is Blind reunion.

Boots store closures – which shops are shutting and when will they reopen? – The Sun

Struggling to wake up in the mornings? You could be experiencing a burnout hangover