It’s good to be Mr. Dolly Parton! On July 20, country music icon Dolly Parton took to her social media accounts to wish her notoriously private husband, Carl Dean, a very, very happy birthday. The kicker: She did it all while donning a legendary Playboy bunny costume — much like the one she wore when she graced the cover of the famous publication way back in 1978 (per HuffPost).

In the now viral video, Parton explained that her husband “always loved the original cover of Playboy,” so she opted to re-create the special moment “to make him happy.” “He still thinks I’m a hot chick after 57 years,” she declared, “and I’m not going to try and talk him out of that.” She also playfully added the caption, “It’s always #HotGirlSummer for my husband, Carl. Happy birthday my love!”

As one can imagine, the various social media platforms were set ablaze with the masses commenting on Parton’s seductive well wishes. Keep reading to learn what they had to say!

Dolly Parton is the queen of hot girl summer 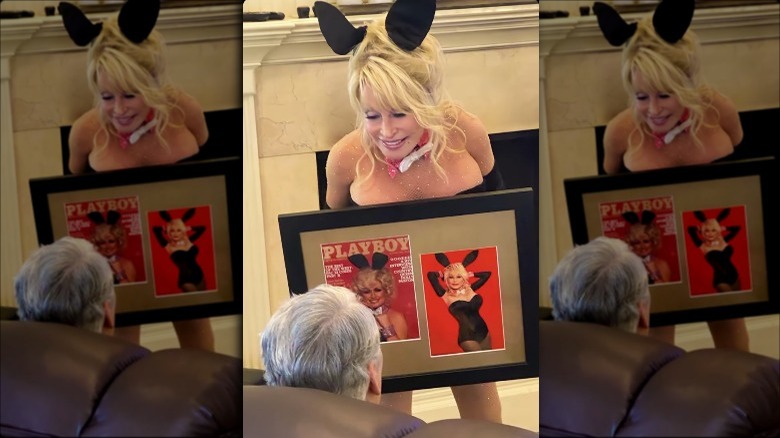 Twitter and Instagram lit up like the midnight sky on the Fourth of July as users caught wind of Dolly Parton’s latest video in which she publicly wished her longtime hubby a happy birthday, Playboy-bunny style.

“Happy birthday Carl , you lucky lucky son of a gun,” one Twitter user penned, while another wrote, “Dolly!!! You are freaking ICONIC!! I think my soul has left my body.”

Meanwhile on Instagram the reaction was much the same with many users referencing one of Dolly’s famous songs. “Take that Jolene!” one user wrote while another matter of factly said, “Let’s be honest, Jolene never had a chance.”

Even the Country Music Television channel got in on the action when they commented, “You invented hot girl summer & we’re forever grateful,” underneath the now famous Instagram post.

It’s a hot girl summer, indeed! Now if only she could fulfill her mission to get the masses vaxxed and waxed. Here’s to hoping!