You don’t need a telescope to see the Milky Way, but our galaxy isn’t always visible in the night sky.

Photographers usually have to wait for the perfect moment — before sunrise, when the moon has set — to catch the starry spectacle. The sky must also be free of light pollution from city buildings or satellites.

But in the right conditions, the galaxy arches across the sky in a multicolored band that can seem like a rainbow’s nocturnal cousin.

The travel photography blog Capture the Atlas recently highlighted 25 images that represent this phenomenon as part of its “Milky Way Photographer of the Year” contest. Though the southern hemisphere usually has the best vantage points, the photos were snapped in 12 different countries, including the US and Spain.

The contest doesn’t have one overall winner, so here are 10 of the most stunning images from the bunch.

Photographer Bryony Richards snapped this shot of the Milky Way's core just before dawn at the Capitol Reef National Park in Utah. 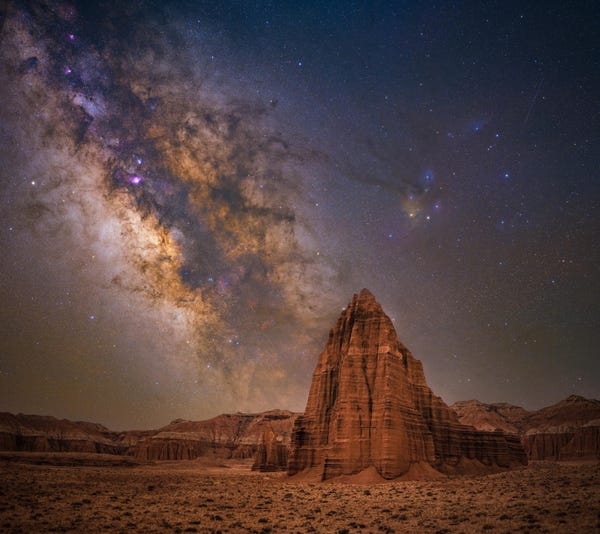 The Milky Way’s core, or bulge, is a mixture of old stars, gas, and dust.

Further west in Utah, the Milky Way lurks outside a stone cavern at the Grand Staircase-Escalante monument. 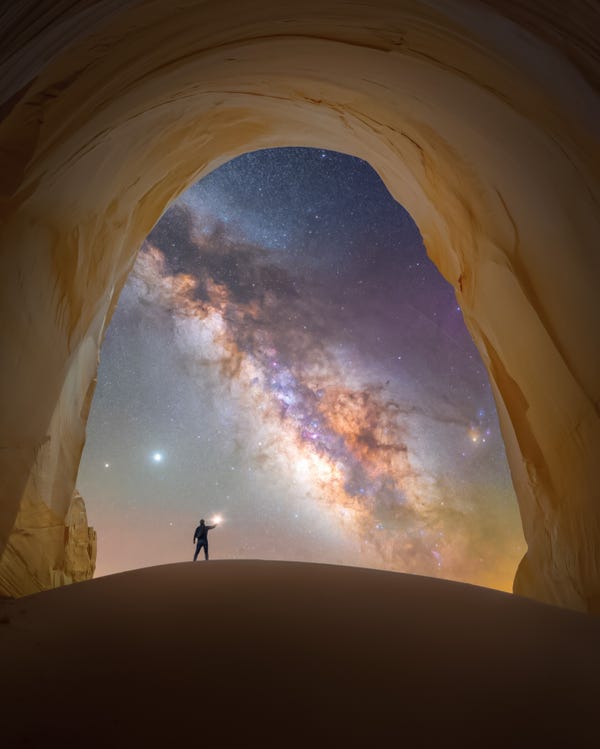 “Due to its remoteness, this natural stone chamber provides some of the clearest, most pristine views of the Milky Way,” photographer Spencer Welling wrote in his caption of the photo.

Utah’s southwestern deserts are ideal for stargazing, since much of the land is protected and little urban light pollutes the night sky.

The Milky Way's famous Southern Cross constellation hovers above the Villarrica Volcano in Chile in this image from photographer Tomas Slovinsky. 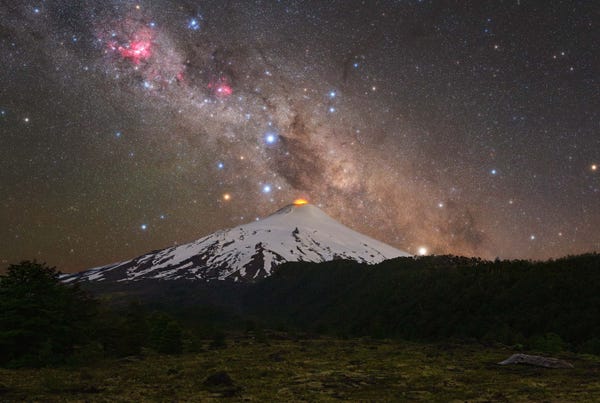 Slovinsky used the constellation as a guidepost for spotting the south celestial pole — the point in the sky directly above Earth’s southern axis.

His photo also captures two prominent nebulae — clouds of dust and gas in which new stars form. The Coalsack Nebula, located within the Southern Cross constellation, is visible as a dark smudge just above the volcano. It’s approximately 590 light-years from Earth.

In the upper left corner, the Carina Nebula lights up pink in the sky. It’s located around 8,500 light-years from Earth.

Even some of the world's largest waterfalls, like Brazil's Iguazu Falls, appear small relative to a Milky Way backdrop. 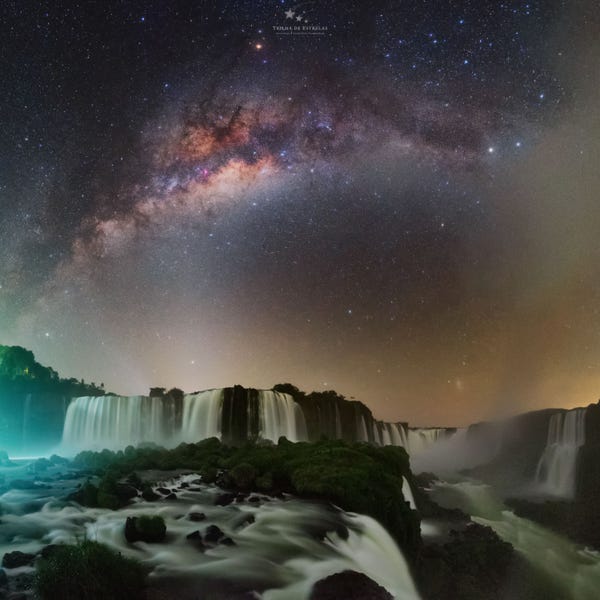 Photographer Victor Lima had to secure special permission to take this photograph — he spent four days in the Iguazu National Park, with jaguars roaming at night.

His image captures the Milky Way alongside one of the park’s main waterfalls, the “Santa Maria Jump.” You can spot Saturn just above the waterfall, below the Milky Way core.

The Ijen volcano complex in Java, Indonesia spews electric-blue flames at night — a result of sulfur combusting when it comes in contact with air. The colors are a striking compliment to the Milky Way. 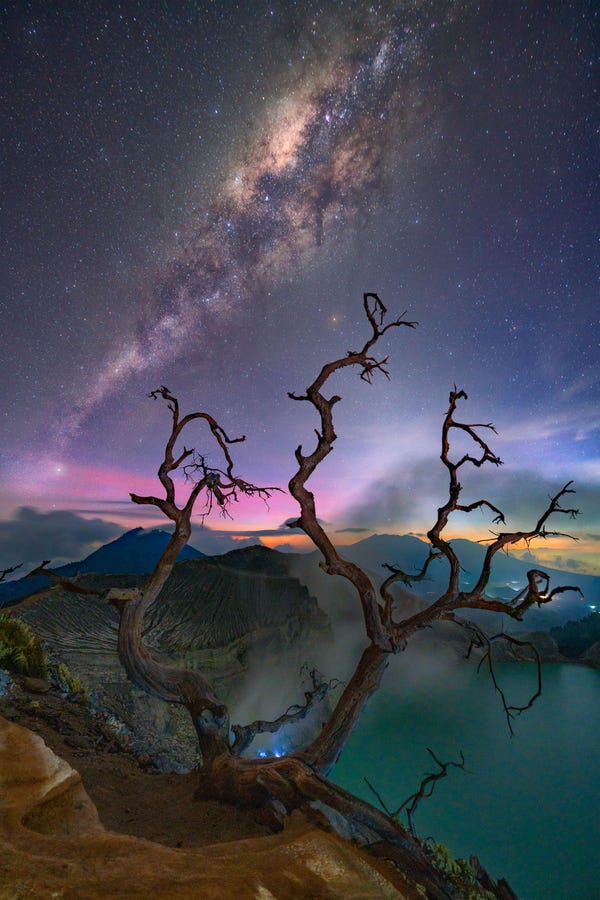 “The blue fire was burning just below the mountain while the Milky Way kept rising,” photographer Gary Bhaztara wrote in his caption of the photo. 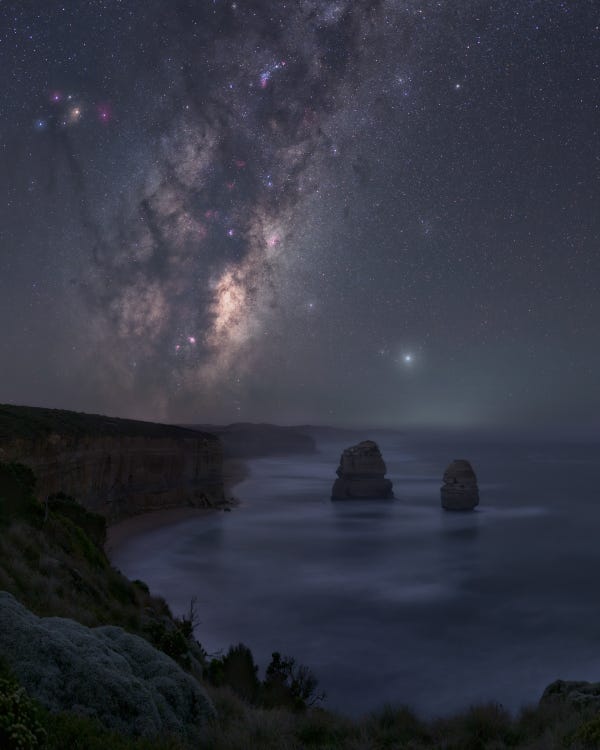 “I had brought a new piece of equipment with me, a star tracker, and as soon I started to set it up, I knew it was going to be a tricky night,” Cantabrana wrote in his caption.

“After numerous failed attempts to align it towards the south celestial pole, I was ready to give up, but I decided to take a shot and ‘see what happens’ while the galactic core was rising up,” he added.

The result is a shadowy image of the Milky Way looming above the coast. 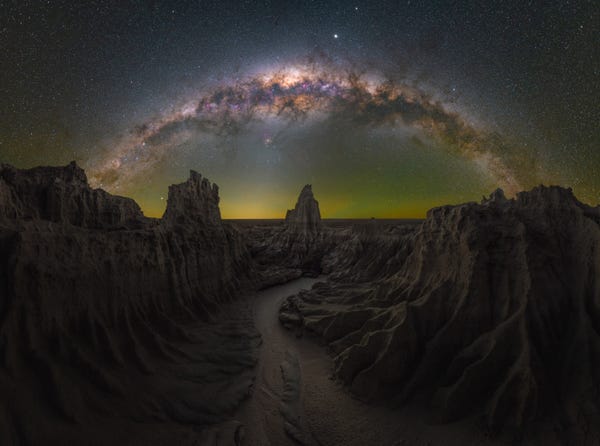 Photographer Daniel Thomas Gum drove from his home in Sydney to nab this view from Lake Mongo in New South Wales. The setting was “otherworldly,” he wrote in his caption.

“Large, jagged walls framed a winding path leading to a centered spire to the west,” Gum said. “There was only ever going to be one way to do it justice and that was as a multi-layered Milky Way panorama.”

In New Zealand, photographer Larryn Rae climbed for 4 hours to capture this image on a windy night.

Rae took the photo at the summit of Fanthams Peak, part of the Mount Taranaki volcano.

He had to lug his equipment up 6,500 feet amid 43-mile-per-hour winds and near-freezing temperatures (around 5 degrees Fahrenheit). 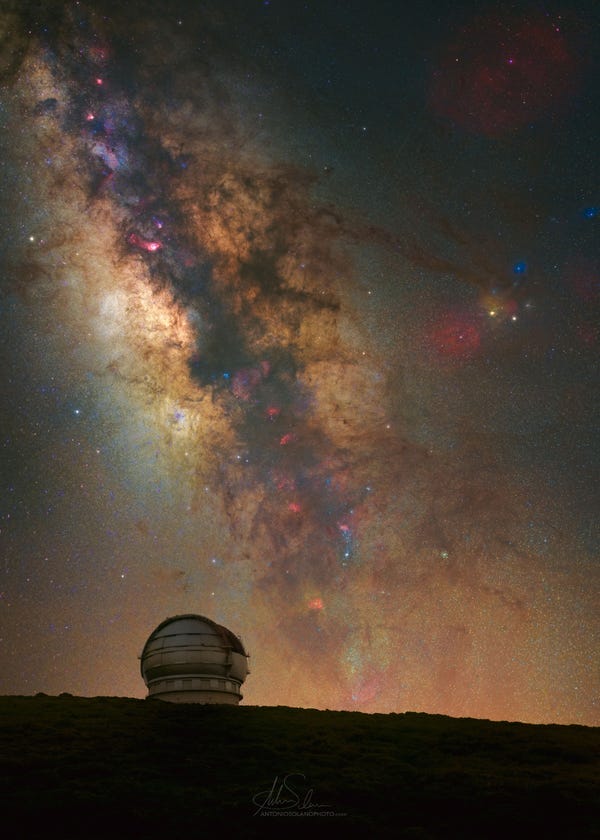 Solano took the photo during the final night of his trip to the island. The “Roque de los Muchachos,” a rocky mound at the island’s highest point, sits at the base of the Milky Way. 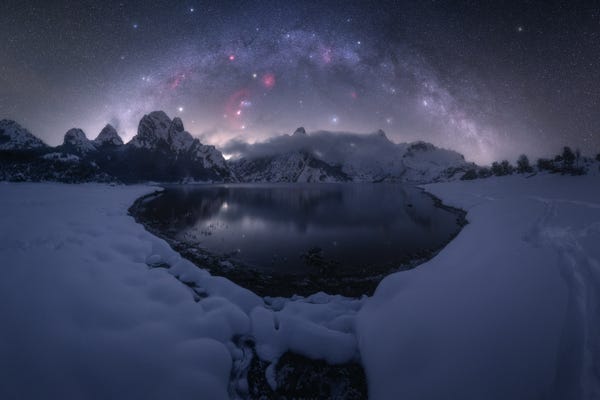 features, Milky Way galaxy, Phot
You may also like: