A 23-year-old Italian woman received six doses of Pfizer’s coronavirus vaccine on Sunday, after a nurse at a hospital in Tuscany accidentally injected an entire vial.

Italian news agency AGI reported the incident on Monday, and USL Toscana Nord Ovest, a health network in Tuscany, acknowledged it in a press release.

The woman is in stable condition after receiving fluids and the pain reliever paracetamol, AGI reported. 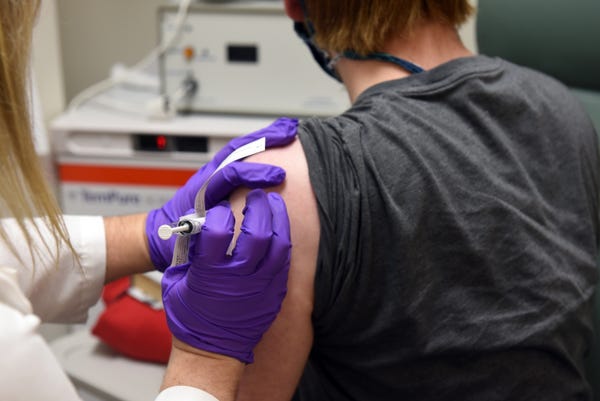 Clinical trials often test out different dosing regimens to the find the one that’s safest and most effective.

That was the case in Pfizer’s phase 1 and 2 trials: Some participants received 100 micrograms of the vaccine — more than three times the standard dose now recommended by the Food and Drug Administration. Those who received that higher dose didn’t report any serious adverse reactions and saw roughly the same types of side effects as those who’d received the standard dose. Fever was far more common among the higher-dose recipients, though — 50% versus 8%.

Overall, the researchers found “no substantial differences” in the immune responses among those who’d received the higher dose versus those who got the standard one. So it makes sense to administer less of the vaccine: A lower dosing regimen means manufacturers can get more shots into arms quickly.

“The main issue in most cases will be the waste of the vaccine rather than any serious side effects,” Peter Collignon, a physician at Canberra Hospital in Australia, told The Guardian.

Doctors do worry, however, that reports of vaccine-administration errors could undermine public trust in coronavirus shots or in the healthcare workers who give them.

“Even if these ‘overdoses’ are not likely to be harmful, it’s always safest to stick to the recommended dose,” Crawford wrote. In the case of the Brisbane accident, he added, “we don’t want to see an incident like this repeated.”