Follow
Home » Science » A 'super blood moon' will appear large and red in the sky on Wednesday. Here's how to spot the rare eclipse.

A 'super blood moon' will appear large and red in the sky on Wednesday. Here's how to spot the rare eclipse.

The night sky could look a bit spooky on Wednesday, depending on your vantage point.

A lunar eclipse will peak at 7:14 a.m. ET tomorrow, giving the moon a reddish hue. The event coincides with a supermoon — a full moon that happens when the moon is at the closest point in its orbit to Earth. Hence the nickname “super blood moon.”

The eclipse won’t be visible everywhere, though: Only parts of North America, South America, Asia, and Oceania will be able to see it.

The best viewing points in the US are Alaska and Hawaii, but most western states should have a decent view. Some people east of the Mississippi will be able to witness a partial lunar eclipse. But East Coasters probably won’t see much.

This will be 2021’s only total lunar eclipse. The phenomenon occurs when the moon and sun are on opposite sides of the Earth, and the moon enters Earth’s shadow. During that time, the moon doesn’t get any direct sunlight, though it’s still exposed to light filtered through Earth’s atmosphere. When that light hits the moon’s surface, it’s reflected back with a red glow because air molecules in the atmosphere tend to scatter blue light.

Supermoons, meanwhile, happen a few times a year at most. They’re the biggest and brightest full moons of the year: about 7% bigger and 15% brighter, on average, than a typical full moon. Wednesday’s full moon — which is also referred to as the “Flower Moon” because it appears in the spring — is the second and last supermoon of 2021. The first happened in April.

The year’s two supermoons are “virtually tied” in terms of size and brightness, according to NASA. But the upcoming full moon will be about 98 miles closer to Earth than the last, so technically it holds the record for the closest supermoon this year.

West Coasters will need to wake up early 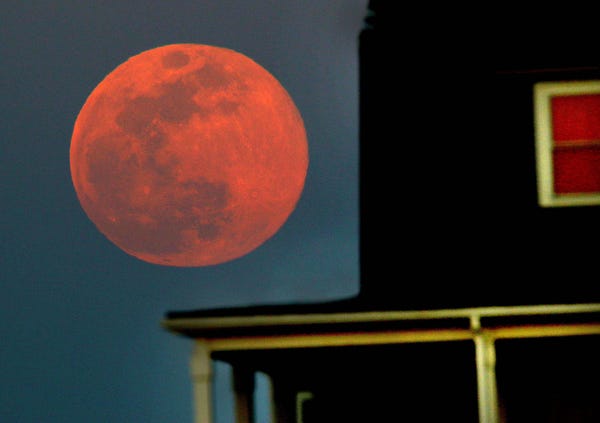 The total eclipse is only visible for about 15 minutes, from 7:11 to 7:26 a.m. ET. That’s around the time when the moon sets in Mexico, the western US and Canada, southern Chile and Argentina, western Peru, and most of Central America and Ecuador. It’s the ideal window for viewing. 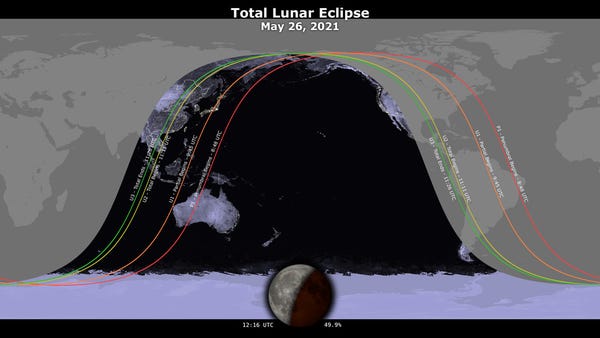 People in the eastern US and Canada can also view a partial eclipse just before the moon sets on Wednesday morning.

Countries in the Asian Pacific Rim, including China and Russia, can view the eclipse just after moonrise. But the best views are from eastern Australia, New Zealand, and the Pacific Islands.

Timeanddate.com offers a guide to when the eclipse is clearly visible in your area. It will also provide a live stream of the event starting at 5:30 a.m. ET on Wednesday.

If you plan to watch outside, you’ll want to find a high vantage point, since the moon will be low in the sky.

Lunar eclipse, super blood moon
You may also like: