Amazon is being urged to rename its personal assistant because girls also named Alexa are being relentlessly bullied by other schoolchildren, their parents say.

The Alexa assistant — which was launched in 2014, but only had its UK debut in 2016 — can increasingly be found in homes via Amazon’s Echo and Echo Dot devices.

Not only is the AI-powered system named Alexa, it is also the default ‘wake word’ used to alert Amazon devices that an instruction or question will follow.

However, this has led to individuals named Alexa becoming the butt of recurring jokes in which their name is shouted, followed by a command.

The assistant’s granting of a name shared by real people has resulted in movements such as ‘Alexa is a Human’ — which is lobbying Amazon to reconsider the choice.

There are some 4,000 individuals named Alexa under the age of 25 in the UK alone — many of whom report experiencing mockery thanks to their digital namesake. 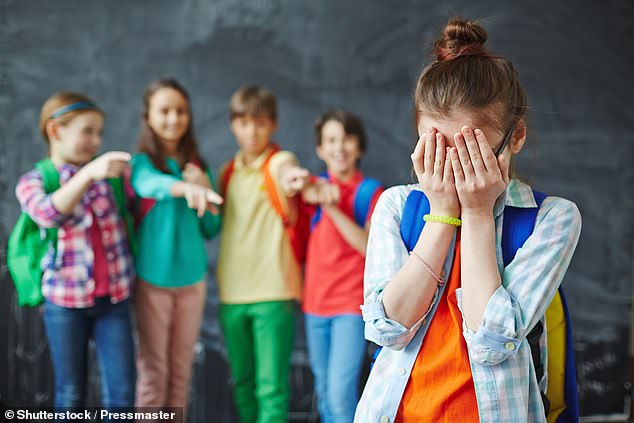 Amazon is being urged to rename its personal assistant because girls also named Alexa are being relentlessly bullied by other schoolchildren, their parents say (stock image)

Amazon is not the only smart device manufacturer to have given their voice assistant a name used by real people.

Siri — the name of Apple’s assistant — is the diminutive form of the name ‘Sigrid’ and is used in Norway, Sweden and the Faroe Islands.

Fortunately, the pronunciation is slightly different, with both a longer vowel sound and a rolled ‘r’.

However, there are some people named Siri that do pronounce the word in the same way.

One such woman told the BBC that she often received jokes about her name — once even from an Apple employee. 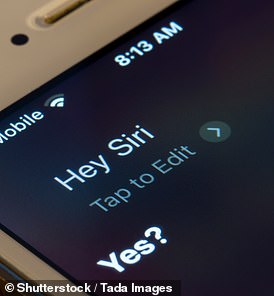 ‘Alexa is a Human’ is the initiative of Massachusetts resident Lauren Johnson, who was moved to act after the distress experienced by her own daughter.

From older children, she added, the jokes can even take on a sexual component.

As a result of this treatment, some parents have felt forced to take the extreme step of legally changing their daughters’ name to something other than Alexa.

One woman, who wished to remain anonymous, told the BBC that her teenage daughter Alexa started to receive abuse from other children — and even teachers — as a result of her name as soon as she entered secondary school.

‘She started to not want to introduce herself because of the jokes and the backlash. She was and still is a child, yet adults thought it was OK to make a joke of her. It’s devastating. The school was unhelpful and told her she needed to build resilience.’

As a result of the impact the teasing was having on her mental health, the family made the decision to change Alexa’s name.

Another mother told the BBC that her daughter Alexa, who is only 6, began being mocked for her name when she entered reception classes.

‘Older children would say things like “Alexa, play disco”. Other boys picked up on it and shouted commands at her.’

She said the issue is now affecting her daughter’s confidence, with children ‘constantly’ mocking her when she goes to the park.

In response, Amazon said that it was ‘saddened’ and ‘condemned’ the bullying, adding that its devices can be programmed to respond to different names.

However — at least for now — it appears that Alexa will remain the default wake work for the tech giant’s smart devices and the name most associated with the voice assistant.

This might well see the name abandoned by real people — with ‘Alexa’ having already fallen from the 167th most popular baby name in the UK in 2016 to 920th by 2019.

Critics of Amazon have suggested that the tech firm has not sufficiently advertised the fact that the wake word for their devices can be changed. 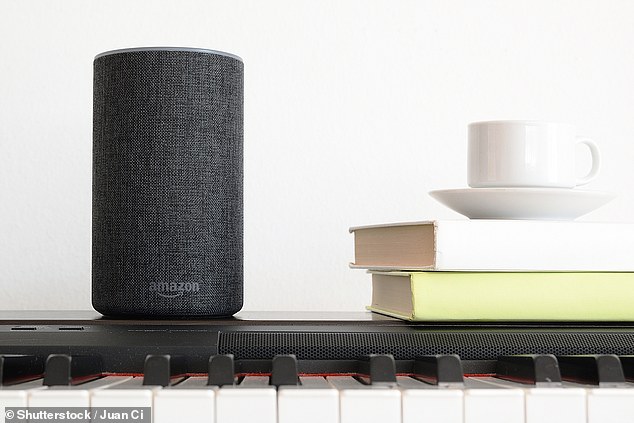 The Alexa assistant — which was launched in 2014, but only had its UK debut in 2016 — can increasingly be found in homes via Amazon’s Echo (pictured) and Echo Dot smart devices 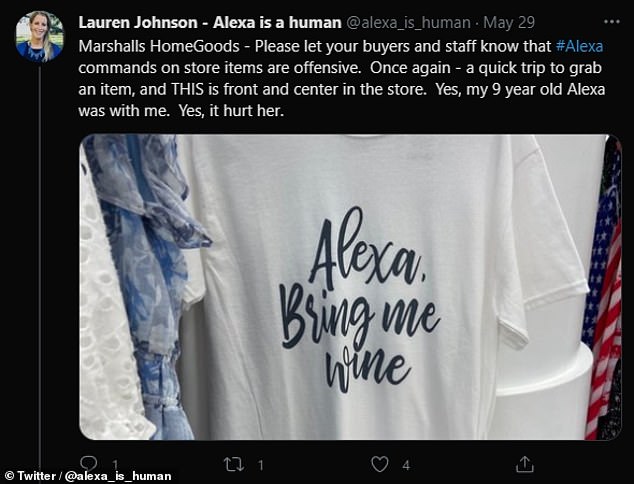 ‘Alexa is a Human’ is the initiative of Massachussets resident Lauren Johnson, who was moved to act after the distress experienced by her own daughter. ‘The word Alexa has become synonymous with servant or slave. It gives people a licence to treat people with the name Alexa in a subservient manner,’ Ms Johnson said. Pictured: a t-shirt branded with an Alexa joke

‘As an alternative to Alexa, we also offer several other wake words customers can choose from, including Echo, Computer, and Amazon,’ Amazon told the BBC in a statement responding to the criticism.

‘We value feedback from customers, and as with everything we do, we will continue to look for ways to offer them more choice in this area.

‘We designed our voice assistant to reflect qualities we value in people – being smart, considerate, empathetic, and inclusive.

‘We’re saddened by [these] experiences […] and want to be very clear: bullying of any kind is unacceptable, and we condemn it in the strongest possible terms.’

HOW TO CHANGE WAKE WORDS ON AMAZON SMART DEVICES 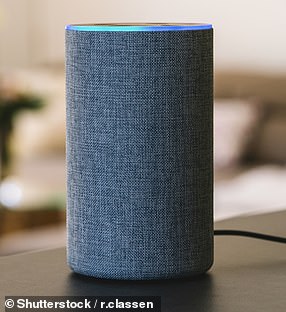 Use the Alexa app to change the wake word on your Amazon smart device.

Alexa, Amazon, D, rename, to, urged
You may also like: