Antarctica’s ice shelves could be melting up to 40% FASTER than we thought thanks to coastal ocean currents, study warns

Antarctica’s ice shelves could be melting up to 40 per cent faster than we thought due to coastal ocean currents, a new study warns.

Scientists in California have created a new climate model that accounts for the impact of a coastal current called Antarctic Coastal Current (ACC).

Their model suggests ice shelf melt rates are 20 to 40 per cent higher than previous predictions from other climate models.

Antarctica’s ice shelves could be melting up to 40 per cent faster than we thought thanks to coastal ocean currents, according to results of a new climate model. Ice shelves are floating sections of ice attached to land-based ice sheets and they help guard against the uncontrolled release of inland ice into the ocean 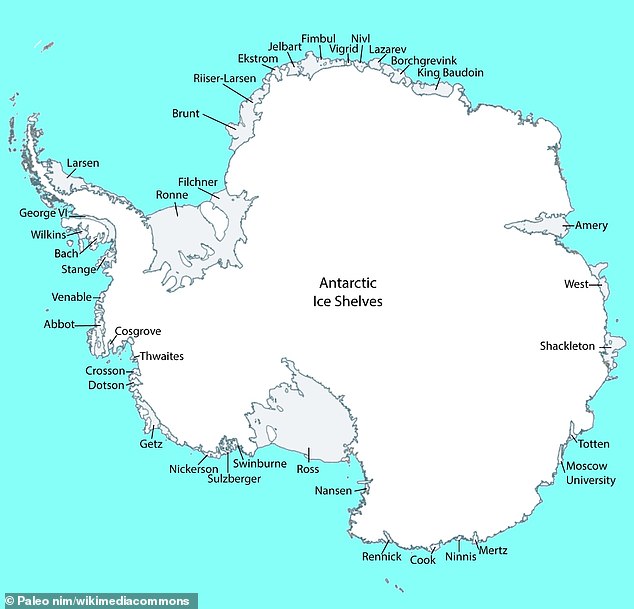 Antarctica is home to a number of ice shelves marked out in this map, including Amery, Shackleton and Ross. The formations are also found along Arctic coastlines

WHAT IS AN ICE SHELF?

Ice shelves are permanent floating sheets of ice that connect to a landmass.

Most of the world’s ice shelves hug the coast of Antarctica.

However, ice shelves can also form wherever ice flows from land into cold ocean waters, including some glaciers in the Northern Hemisphere.

The new study, published on Friday in the journal Science Advances, has been led by experts at Caltech and JPL in California.

‘If this mechanism that we’ve been studying is active in the real world, it may mean that ice shelf melt rates are 20 to 40 per cent higher than the predictions in global climate models, which typically cannot simulate these strong currents near the Antarctic coast,’ said study author Andy Thompson at Caltech.

Ice shelves are large floating platforms of ice that connect to a landmass, such as Antarctica, although they’re also found in other polar locations such as Greenland.

The shelves act as a protective buffer for the mainland ice, keeping the whole Antarctic Ice Sheet from flowing into the ocean, which would dramatically raise global sea levels.

However, a warming atmosphere and warming oceans caused by climate change are increasing the speed at which these ice shelves are melting, threatening their ability to hold back the flow of the ice sheet into the ocean.

For their study, the team focused on one area of Antarctica, called the West Antarctic Peninsula.

Antarctica is roughly shaped like a disk, except where the peninsula protrudes out of the high polar latitudes and into lower, warmer latitudes.

It is here that Antarctica sees the most dramatic changes due to climate change.

The team has previously deployed autonomous vehicles in this region, and scientists have used data from elephant seals with instruments attached to them to measure temperature and salinity in the water and ice.

The team created a computer model that accounts for an often-overlooked narrow ocean current along the Antarctic coast, the Antarctic Coastal Current.

Known for being the southernmost current in the world, the Antarctic Coastal Current runs anticlockwise around the entire Antarctic continent.

But many climate models do not include the Antarctic Coastal Current because it is so narrow, relatively speaking – around 12.5 miles (20 km).

‘Most climate models only capture currents that are 100 kilometers [62 miles] across or larger,’ said study author Mar Flexas at Caltech.

‘So, there is a potential for those models to not represent future melt rates very accurately.’ 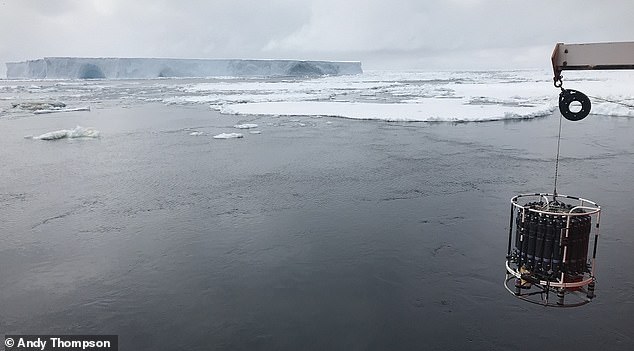 Freshwater is water that contains only minimal quantities of dissolved salts, thus distinguishing it from sea water or brackish water.

Of all the water on Earth, just 3 per cent is fresh water.

Freshwater is threatened by over-development, polluted runoff and global warming.

The computer model showed how rapidly flowing freshwater, melted from the ice shelves, can trap dense warm ocean water at the base of the ice, causing it to warm and melt even more.

It illustrates how freshwater that melts from ice at the West Antarctic Peninsula is carried by the Antarctic Coastal Current and transported around the continent.

The less-dense freshwater moves along quickly near the surface of the ocean and traps relatively warm ocean saltwater against the underside of the ice shelves, which in turn causes the ice shelves to melt from below.

Essentially, increased meltwater at the West Antarctic Peninsula can generate climate warming via the Antarctic Coastal Current, which in turn can also escalate melting even at ice shelves thousands of kilometers away from the peninsula.

This remote warming mechanism may be part of the reason that the loss of volume from West Antarctic ice shelves has accelerated in recent decades.

‘There are aspects of the climate system that we are still discovering,’ Thompson said.

‘As we’ve made progress in our ability to model interactions between the ocean, ice shelves, and atmosphere, we’re able to make more accurate predictions with better constraints on uncertainty. 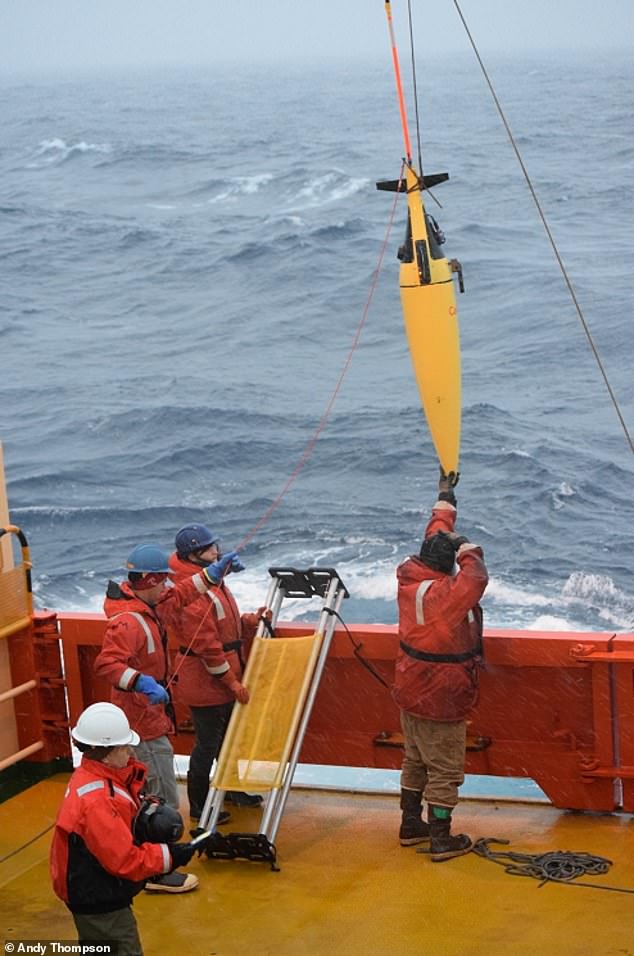 ‘We may need to revisit some of the predictions of sea level rise in the next decades or century – that’s work that we’ll do going forward.’

The new findings follow another study published in Nature on Wednesday that said Antarctica’s ice shelves are ‘crumbling’ and have significantly reduced in area over the last 25 years.

Around 12 trillion tonnes of ice being lost over the past 25 years, the study found, which is double the previous estimate.

We know one cause of ice shelf retreat is the thinning of ice shelves, which is largely caused by relatively warm seawater eroding the base of these shelves,’ two of the authors wrote for The Conversation this week.

For the first time, scientists have found a huge groundwater system below ice in Antarctica.

The reservoir of groundwater lies beneath the Whillans Ice Stream in West Antarctica, say experts in the US.

Groundwater is fresh water (from rain or melting ice and snow) that soaks into the soil and is stored in the tiny spaces (pores) between rocks and particles of soil.

Such groundwater systems are likely common in Antarctica and affect how the continent reacts to climate change – although researchers don’t know exactly how.

Groundwater may exist under similar conditions on other planets or moons that are releasing heat from their interiors, according to the team.

Giant's Causeway was formed in a matter of DAYS, study claims